What We Owe the Future 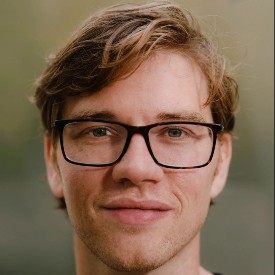 William MacAskill is a moral philosopher at the University of Oxford and a senior research fellow at the Global Priorities Institute. He’s also one of the founders of the effective altruism movement, a philosophy and community aimed at using evidence and reason to figure out how to benefit others as much as possible.

Below, William shares 5 key insights from his new book, What We Owe the Future. Listen to the audio version—read by William himself—in the Next Big Idea App. 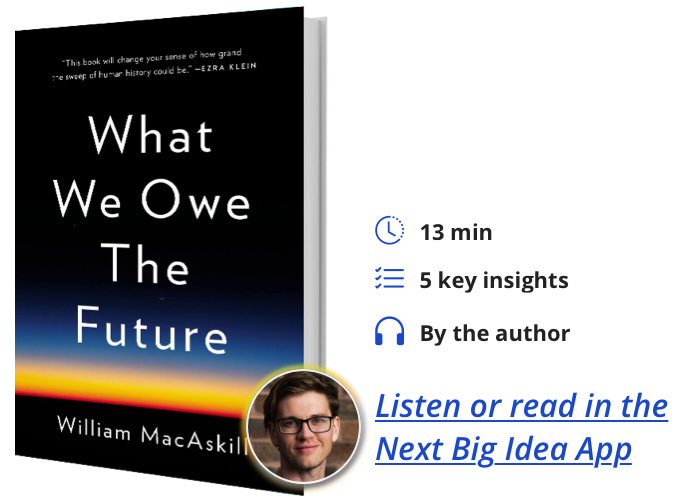 Or suppose that a plague is going to infect a town and kill thousands. You can stop it. Before acting, do you need to know when the outbreak will occur? Does that matter just on its own? No. The pain and death at stake are worthy of concern regardless.

The importance of leaving a positive world for future generations is supported by various intellectual and religious traditions. The Gayanashagowa, the century’s old oral constitution of the Iroquois Confederacy, has a particularly clear statement. It calls on the Lords of the Confederacy to have always in view not only the present, but also the coming generations. This insight is crucial.

“Harm is harm whenever it occurs.”

At its core, morality is about putting ourselves in other’s shoes and treating their interests as we do our own. We often neglect this for future generations because they aren’t here to voice their interests. They can’t bargain or trade with us. They can’t tweet or write articles. They are utterly disenfranchised, so it’s up to us to take their interests into account.

2. There could be a lot of future people.

We’re used to thinking of ourselves as inhabitants of modernity or even post-modernity. We look on previous eras as the ancients. But in What We Owe The Future, I argue that we actually stand at the beginning of history, not the end. So far, our species, Homo sapiens, has lasted 300,000 years. If we manage to last just as long as a typical mammal species—1 million years—then we have 700,000 years to go. Even if our current population fell to just a 10th of its current size, this would mean that over 99% of humans who will ever live have not yet been born. On the scale of a typical human life, you, in the present, would be just five months old.

But as a species, humanity is anything but typical. If we are able to fend off existential risks that face us in the coming centuries, we may be able to last even longer than 700,000 years. We could survive the hundreds of millions of years remaining until earth is no longer habitable or even the tens of trillions remaining until the last stars burn out. Internalizing the sheer size of the future should give us pause and encourage us to reevaluate our priorities. We should think seriously about how we can promote a flourishing long-term future.

3. The risk of extinction or societal collapse is unnervingly high, but we can take actions to prevent it.

One of the ways we can benefit future people is to ensure that they have a life at all. But, unfortunately, we face several threats of extinction or collapse in the coming centuries that may preclude this future. Usually when people think of huge threats facing all of humanity, they immediately think of climate change, and rightfully so. Climate change is a major problem that requires unprecedented global coordination and action. Its impact will fall disproportionately on the world’s poor—a major injustice, given that rich counties are primarily responsible for emissions.

But there are other threats that are at least as severe as climate change and radically more neglected. The one I focused on most in What We Owe The Future is the risk of a catastrophic pandemic, one that could wipe out 95% or more of the human population. We’re all now familiar with the effect of pandemics from COVID-19, but with the advent of advanced biotechnology, pandemics could get far, far worse. At the current rate of progress it will not be long before we can create a new pathogen with the lethality of Ebola and the contagiousness of measles.

“If you are reading this in a relatively well-off country, you are more likely to die in a pandemic than you are from fires, drowning, and murder—combined.”

Metaculus, a community platform that enables people to forecast real world events, currently puts the risk of a pandemic that kills over 95% of the world’s population this century, at almost 1%. If you are reading this in a relatively well-off country, you are more likely to die in a pandemic than you are from fires, drowning, and murder—combined. The stakes are high, and we need to manage these technologies carefully.

4. Bad moral views are at least as scary.

For most of human history, slavery was widespread and legally sanctioned. In What We Owe The Future, I argue that the the abolition of slavery was contingent—that is, it depended crucially on particular circumstances and its end may not have been inevitable. Some people argue that abolition was an inevitable consequence of industrialization, which made slavery less profitable. But few historians adhere to this view. For one, slavery was enormously profitable for the British in the years leading up to abolition; when slavery ended, the price of sugar shot up 50% in England. And implementing abolition was also hugely expensive, costing 40% of the British Treasury’s annual expenditure at the time.

Instead, an important cause for abolition was shifting moral sentiments in the 1700s in the US, especially the contributions of Quaker abolitionists. Perhaps the most fascinating of the Quaker abolitionists was Benjamin Lay, who stood at just four feet tall and called himself Little Benjamin, likening himself to little David who killed Goliath. Lay lived in a cave just outside Philadelphia and boycotted all goods produced by enslaved people. He once stood outside a Quaker meeting in the snow and bare feet with no coat. When passersby expressed concern, he explained that enslaved people were made to work outside for the whole winter dressed as he was. Lay played an important role in Quaker opposition to slavery, which, in turn, played an important role in abolition.

The crucial lesson here is that there is no iron law of history that says we will get to the right moral view. The 20th century saw huge moral regress with the likes of Nazism and Stalinist totalitarianism. Our future could be the same, one of perpetual dystopia, unless we take action to prevent it from happening.

5. Your career and donations matter far more than your personal consumption.

Some people think that the best way to fight climate change is to change what they buy in order to reduce their personal carbon footprint. This is a mistake. If you live in a typical rich country and you reduce your entire carbon footprint to zero, that’s a reduction of 10 tons of CO2. By contrast, a $1,000 donation to an extremely cost-effective climate change organization like the Clean Air Task Force, which promotes innovation in neglected clean energy technologies, would lead to a 100-fold greater reduction in CO2 emissions. Oil companies love spreading the myth of minimizing your carbon footprint because it doesn’t actually hurt their business. To fight climate change and other pressing problems, like pandemics and scary moral views, you can have a much greater impact by focusing on your career choice and donations. These can be far better optimized for impact.

“There is no iron law of history that says we will get to the right moral view.”

As a graduate student, I co-founded a nonprofit called 80,000 Hours. We chose the name 80,000 Hours because that is roughly how many hours you have in your career, 40 hours per week, 50 weeks per year, for 40 years. Yet the amount of time that people normally spend thinking about their career is usually tiny in comparison. The people I know who I think have made huge positive contributions to humanity, present and future, are all relentlessly thoughtful with which professional projects they take on. They usually employ three steps:

● First, they spend lots of time learning both about the various issues facing humanity and about which roles they might be the best fits for.
● Second, they build their career capital by developing relationships and gaining experience at organizations they might want to work for.
● And lastly, they actually do good by supporting effective solutions to the world’s most pressing problems.

To listen to the audio version read by author William MacAskill, download the Next Big Idea App today: