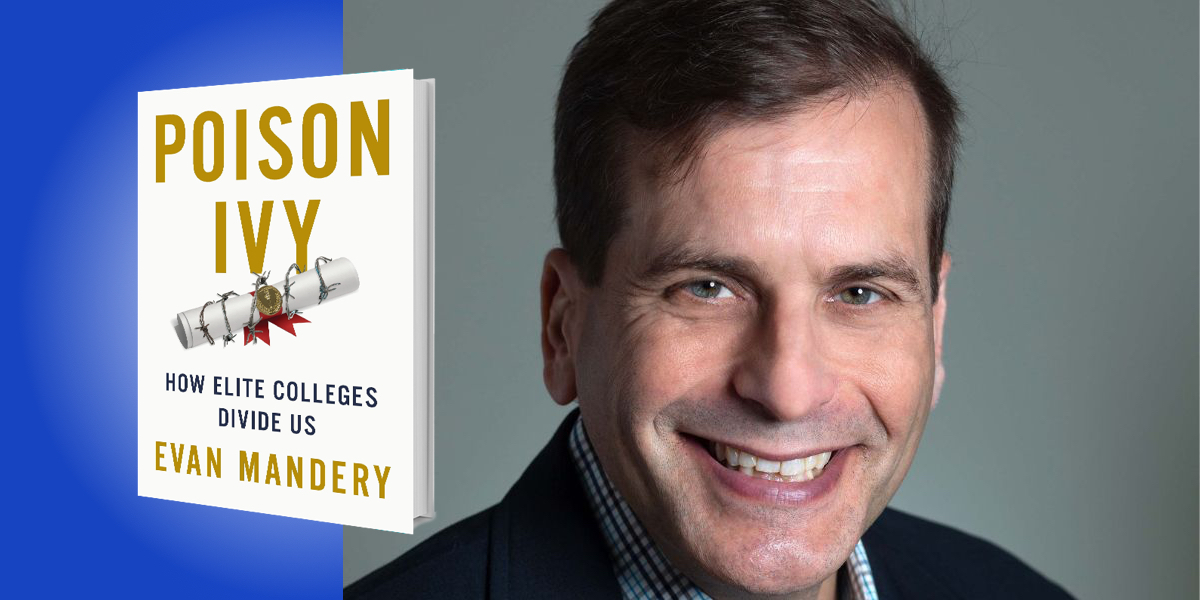 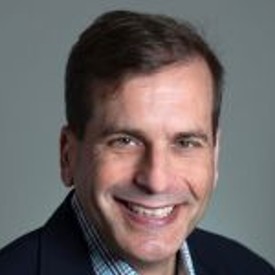 Evan Mandery is a professor at the City University of New York. He has written for the New York Times and Politico and has appeared on The Today Show, CNN, and NPR’s Fresh Air. He attended Harvard College and Harvard Law School.

Below, Evan shares 5 key insights from his new book, Poison Ivy: How Elite Colleges Divide Us. Listen to the audio version—read by Evan himself—in the Next Big Idea App. 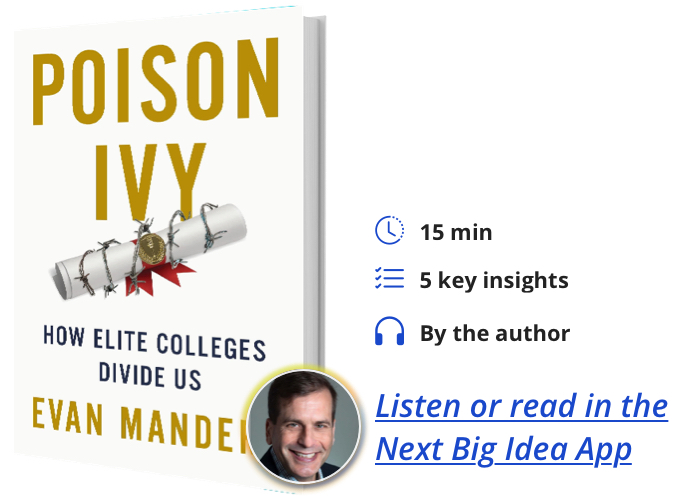 Maybe you’ve seen a made-for-TV movie called Homeless to Harvard. It’s about a young woman named Liz Murray’s journey from the foster care system to Harvard’s freshman class. It’s inspirational. It’s also basically the movie poster for the story that elite colleges tell about themselves. Their website and brochures are filled with the images of students that these colleges have helped lift out of poverty. These good works are worthy of praise. But they’re only part of the story.

Poison Ivy: How Elite Colleges Divide Us began on a bet. I was at dinner with a close friend who argued that, all things considered, Harvard was a force for good. Maybe you’ve even made an argument similar to my friend, who was repeating a story that Harvard tells—a story of access and diversity. He hinged a lot of his argument on Harvard’s Financial Aid Initiative. Many colleges now have similar programs. Harvard has allowed anyone whose family made under $65,000 to attend for free. This begged the question, I said: How many Harvard students came from families making less than $65,000 a year? For context, the median U.S. household income was $52,000. I said that if anywhere near half of Harvard students came from families making less than $65,000, I’d buy dinner.

It wasn’t even close. More Harvard students came from families in the top 1 percent than the bottom 50 percent.

We settled our bet using data from the Harvard Crimson’s freshmen survey. Soon our understanding of opportunity in higher education would be immeasurably enriched by a groundbreaking study based on millions of tax filings and tuition records. The picture painted by the economists Raj Chetty and John Friedman was worse than anyone imagined.

Chetty and Friedman’s data also proved something that we already suspected—that elite colleges are the surest way to reach the stratosphere of wealth. They’re the gatekeepers to jobs in the investment banking, management consulting, and technology sectors, industries that set the national agenda and, of course, pay handsomely.

“Elite colleges are the surest way to reach the stratosphere of wealth.”

One way of looking at the data is this: If you imagined that you were at Princeton’s tenth reunion, for every graduate in the room that had been lifted from poverty, there would be 40 rich kids who had remained rich.

So remember to look both up and down.

2. Look both inside and outside.

Perhaps the biggest obstacle to educational justice is that the mechanisms that fuel inequities are excesses of kindnesses. When someone at the country club helps their golfing buddy’s nephew land an internship at Goldman Sachs or writes him a letter of recommendation to Yale, this feels like doing good. It’s easy to forget who gets left behind.

But consider this last data point from Chetty and Friedman. If you’re born into a family in the top 0.1 percent (meaning they make about $600,000), there’s about a 40 percent chance that you’ll end up at a school in the top tier of the Barron’s rankings—schools like Middlebury, Amherst, Wesleyan, or one of the Ivies. If you’re born into the bottom income quintile—meaning you make less than about $20,000—the chance of you ending up at an elite college is less than one-half of one percent. A majority of the poorest kids won’t attend any college at all.

It’s easy to forget, too, the stories that we tell about the people who get left behind. If Ivy League colleges were honest, they’d remind their entering freshmen that most of them were the winners in a game where the table had been tilted in their favor from the start.

Instead, they teach them that they’re the best and the brightest. Elite colleges pretend as if the higher education system rewards merit rather than affluence. Recently, a cottage industry has arisen of intellectuals—mostly professors at elite colleges—exposing the construct of “meritocracy” as a myth. But that construct didn’t emerge from the ether; it’s cultivated by the colleges themselves. Shortly after assuming office, former Stanford president John Hennessy offered a typical message to the entering freshman class at a school where the mean family income is $500,000 per year. “Our admission office is one of the best in the country,” Hennessy said, “and we don’t make mistakes!”

That’s the American myth of meritocracy.

The downside is that it implicitly frames disadvantage as a failure of skill and effort. This leads to a politics of humiliation and legitimizes grievances with the system. From here, it’s easy enough to draw a straight line to Trumpism. Of the many hateful mechanisms Donald Trump exploited on his pathway to the presidency, none was quite so effective as his critique of elites, a ploy the University of Pennsylvania graduate borrowed from Adolf Hitler.

Ford Foundation president Darren Walker draws a careful distinction between generosity and justice. Generosity is about the size of the gift. Justice is about the underlying systemic problems. It requires consideration of both the good and the harm caused by a gift. As Walker puts it, “Generosity makes the donor feel good. Justice implicates the donor.”

Harvard has a $53 billion endowment. Princeton has an endowment of $4.4 million per student—enough to run the college in perpetuity for free. Giving to these schools is generous, but not just.

So the next time the development office calls, remember who’s being left outside.

I don’t know about you, but I’d feel differently about Ivy League colleges if they produced a lot of do-gooders. But that’s not how it goes. In a survey of Harvard’s class of 2020, 63 percent of seniors entering the workforce said they planned to go into consulting, finance, or technology. Just 4 percent intended to enter public service or work for a non-profit.

When I shared this data with a friend of mine who’s the public interest advisor at an elite school, she said the data simply reflected kids’ underlying attitudes. But research by the sociologist Amy Binder shows that the overwhelming majority of students enter college undecided on a career. Very few start out wanting to be an investment banker. They gravitate toward finance out of high-achieverism, and after elite colleges show them no obvious alternative to working on Wall Street—or at least none with significant status and prestige.

It doesn’t have to be this way.

When Clayton Spencer took the helm of Bates College in Lewiston, Maine, she defined her presidency around work. Under her leadership, Bates opened a center that encourages faculty to connect their courses to discussions of meaning and careers, created practitioner-in-residence positions, and built a course to help students think about the architecture of life. The leading career choices among Bates graduates are education and health care—which respectively attract 17 and 13 percent of the class. At Harvard, the equivalent numbers are two and four.

The Bates Center for Purposeful Work is hardly a panacea. But it shows that it’s at least possible to shift what elite college students do with their degrees. Similarly, small changes could make a big difference in the diversity of who gets into these schools. Ending legacy and donor preference, limiting early decision, creating pipeline programs with neighborhood schools, and expanding capacity are just some of the many ideas advanced by experts that could make elite colleges engines of opportunity instead of class stratification.

One of the coolest people I met while writing my book was a man named Simon Cataldo. He’s now a state representative-elect in Massachusetts, but in 2010 he was a recent college graduate doing Teach for America at a high school in Harlem—and on the verge of despair. No matter what he tried, he couldn’t get through to his students. He was ready to quit, when on a train ride home for Thanksgiving, he had the idea to teach his kids lacrosse.

“Living in the high noon, without ever seeing the midnight, promotes a sort of blindness.”

Today, Harlem Lacrosse and Leadership has programs on 18 sites in five cities, and serves about 1,300 students each year, less than ten percent of whom are white. It’s far and away the largest provider of opportunity in lacrosse to young men and women of color.

The commonality of the people I met who have done the most to create opportunity and soften segregating borders is that they’ve gotten out of their bubble. The poet Robert Frost, who toiled in obscurity until he was almost 40 years old, called it “knowing the midnight.” The lawyer and human rights activist Bryan Stevenson calls it “proximity to suffering.” “We cannot change global injustice if we isolate ourselves in places that are safe and removed and disconnected,” he says. “To change the world, we are each going to have to find ways to get closer to people who are living on the margins of society.”

Living in the high noon, without ever seeing the midnight, promotes a sort of blindness. When you live in the suburbs and your children attend wealthy schools, it’s easy to tell yourself that you’ve earned your place, that your family deserves its privileged status.

5. Understand your own power.

Colleges and universities are complex organizations, but they ultimately respond to what their students, faculty, and alumni say. When the development office calls asking for money, tell them that you won’t donate unless the college makes a meaningful commitment to increasing the racial and socioeconomic diversity of its student body. That doesn’t mean increasing financial aid for upper-middle class families—it means creating real pathways for poor students and students of color that have long been the birthright of affluent whites.

In other words, be generous and just. Know the midnight. And demand that the billions of dollars raised by elite institutions with taxpayer support be used to fuel the American dream, not to thwart it. You can make a difference.

To listen to the audio version read by author Evan Mandery, download the Next Big Idea App today: