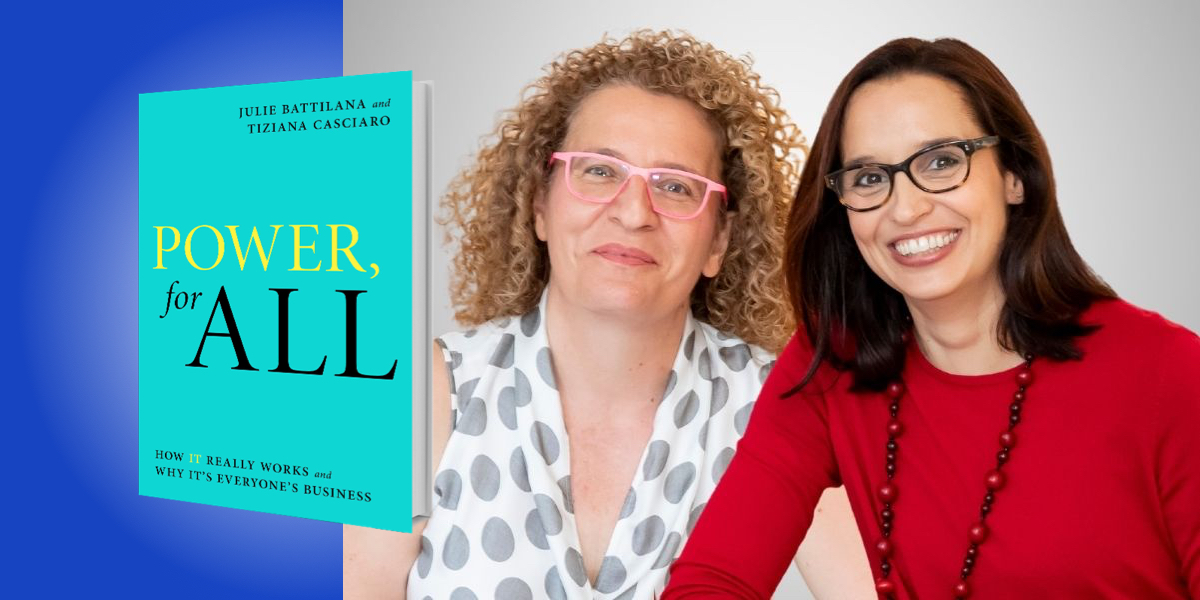 Julie Battilana is a professor of organizational behavior and social innovation at Harvard. Tiziana Casciaro is also a professor of organizational behavior at University of Toronto. They have both spent 20 years researching and teaching about power and the politics of change. Together, they wrote this book to show those with less power how to level the playing field.

Below, Julie and Tiziana share 5 key insights from Power, for All: How It Really Works and Why It’s Everyone’s Business. Listen to the audio version—read by Julie herself—in the Next Big Idea App.

1. Power can be learned.

The first is that power is a possession, that there is some innate trait or personal characteristic (be it charisma or good looks) that guarantees power. The second fallacy is that power is only for those at the top—the CEOs, the top executives, or the prime ministers. The third, and probably the most widespread, misconception is that power is dirty, corrosive to morals, and to be avoided.

These three fallacies about power can limit our ability to take control of our own lives. We end up feeling powerless in the face of jostling workplace politics, or oppressive systems. They also make us less likely to identify, prevent, or stop abuses of power that threaten our collective freedoms and well-being. The good news, however, is that no matter how entrenched these fallacies are, they can be debunked by learning what power really is and how it works.

“Power derives from controlling access to resources that others value.”

So, what is power? Power is the ability to influence others’ behavior, be it through persuasion or coercion.

The next critical question is, where does power come from? The answer is what we call the “fundamentals of power.” Power derives from controlling access to resources that others value. I have power over you if I control access to resources that you value, and vice versa. For example, if you control access to a budget that I need to complete a project, then you have power over me. But if I have access to an expert you need to consult with, then I also have some power over you. Resources are not merely material possession—they can be anything we value, including psychological resources like friendship or recognition.

2. Power is not a possession; it’s relative.

Once you understand the fundamentals of power, you can debunk the first fallacy, that power is a possession. You may have a lot of power over someone today, but this may change tomorrow, depending on what they value and how easily they can access it without relying on you. Inversely, you may not have power over someone today, but this could change.

Consider the example of Nezuma Mjumbe. Nezuma lives in a rural village in Tanzania. A mother of six who did not have the opportunity to go to school, Nezuma felt she did not have much power until 2016, when her situation radically changed, and she became one of the most powerful people in her community. How did this happen?

Nezuma partook in a unique program offered by the international NGO, Barefoot College. Barefoot College trains women who live in remote rural areas across the Global South to become solar engineers through peer-to-peer, learning-by-doing approaches. Once trained, the women return to their communities, electrify them, and maintain the solar grid. So, upon Nezuma’s return to her community, she became a literal source of power by providing one of their most valuable resources: electricity.

“Power is not something one can possess across all relationships and situations. Rather, it’s relative.”

So, power is not something one can possess across all relationships and situations. Rather, it’s relative. Nezuma had gained a skill as a solar engineer, but the value and importance of that skill can always change over time.

3. Power is not only for those at the top; it’s potentially for all.

A group of sociologists in the 1960s wanted to identify what influenced worker productivity in factories. They set out to study a cigarette factory, where workers were paid based on the number of cigarettes they made each day. The workers reported to foremen who reported to top management, but the people who had the most power over the workers were not the top management, nor even the foremen. Despite being much lower in the formal organizational chart, it was the maintenance workers who seemed to have the most power over other workers.

Puzzled at first, researchers soon realized that the maintenance workers were the only ones who knew how to repair the factory’s machines, which were essential for production—and which often broke. So because they controlled the resource of machine repair knowledge, the maintenance workers had more power than their low formal rank suggested. This study reveals that authority and power are not the same. Authority is the formal right to give orders and commands. It can be a source of power, but it is no guarantee. You do not need to have authority to have power if you have another means of accessing a critical resource that others value.

Our research also supports this finding. In studying a large sample of change initiatives in the British National Health Service, we found that the most effective changemakers were not necessarily the people at the top. Instead, the people to whom others go for advice, wherever they are in the hierarchy, are more effective. Why? Because trust is a major conduit of influence, and an intangible but mighty resource for effecting change. Power is not only reserved for those at “the top”—it can potentially be for all.

“The most effective changemakers were not necessarily the people at the top. Instead, the people to whom others go for advice, wherever they are in the hierarchy, are more effective.”

Power isn’t intrinsically good or bad and, contrary to popular belief, it doesn’t have to be acquired via manipulation or cruelty. Rather, it’s an energy that is necessary to move people and lead change in organizations, communities, and more broadly in society. But, let’s not be naïve: power can corrupt.

Research in social psychology has documented the pernicious effects of power on human psychology. In laboratory manipulations, those who are made to feel powerful are more likely to demonstrate excessive pride and self-confidence, to take action, and are less adept at discerning others’ emotional states. If that’s what thinking about power for a few minutes can do to us, imagine the implications of holding important positions of power for years or decades.

To cultivate humility, you need to make it acceptable—even desirable—to say “I don’t know,” and to establish ways to obtain honest feedback. You can also create reminders that success is fleeting. As for cultivating empathy, some organizations ask their employees, especially people in managerial positions, to work for an extended period of time in lower-level roles. Some organizations have embedded interdependence in their annual review process, for instance by asking employees to highlight how others contributed to their success.

Of course, we cannot, and should not, rely only on individual efforts at cultivating humility and empathy. Leaders must also accept that checks on their power are necessary and beneficial. In other words, they must design their organizations to resist power concentration, share power instead, and accept being held accountable for how they use the power they have.

“Those who are made to feel powerful are more likely to demonstrate excessive pride and self-confidence, to take action, and are less adept at discerning others’ emotional states.”

In the aftermath of the pandemic, it is clear that we need to make our economic and social systems more sustainable. But talking about the need for change is only the beginning of the process. Social change is not a technical, straightforward process. It is an inherently political one that entails challenging the status quo, dominant norms, and entrenched power hierarchies. As such, it is tremendously hard, and it cannot be done alone.

We have identified three roles that are necessary for the success of collective efforts for change: agitator, innovator, and orchestrator. Agitators are those who speak out against the status quo and raise public awareness of the problem. Though agitation is often the most visible role, agitation alone is not enough for change; innovation and orchestration are necessary to tip the scales. Innovators develop alternatives to the status quo by proposing concrete solutions to the grievances raised by the agitation. Orchestrators are the pollinators—by ensuring the coordination and collaboration of various parties, they ensure the solutions put forth by the innovators are implemented at scale. Without orchestrators, the final act may never come.

We all have a role to play, but we can each play a different one. In analyzing your own sources of power—our networks, our personal characteristics, the roles we hold, the resources we have access to—we can think about what role we can play in bringing about change.

To listen to the audio version read by co-author Julie Battilana, download the Next Big Idea App today: