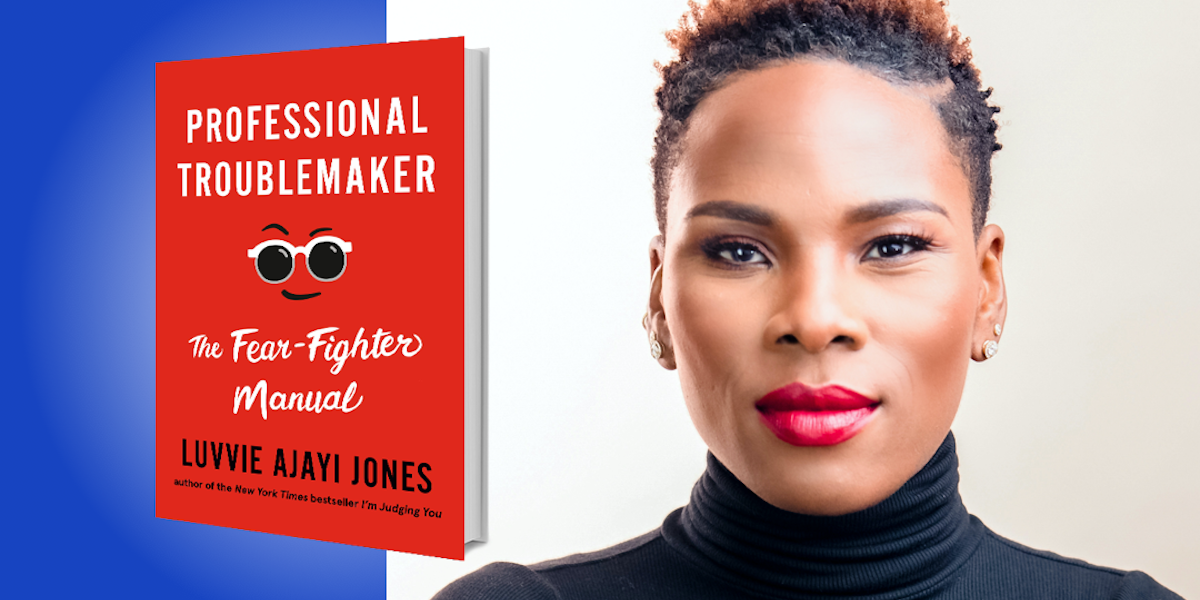 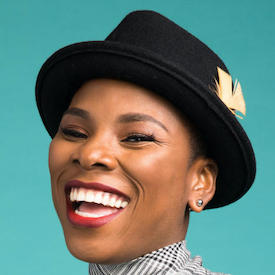 Luvvie Ajayi Jones is an award-winning writer, speaker, and podcast host. She is the author of the New York Times bestseller I’m Judging You: The Do-Better Manual and the host of the podcast Professional Troublemaker, in which she critiques culture through the lens of technology, comedy, and justice.

Below, Luvvie shares 5 key insights from her new book, Professional Troublemaker: The Fear-Fighter Manual (available now from Amazon). Download the Next Big Idea App to listen to the audio version—read by Luvvie herself—and enjoy Ideas of the Day, ad-free podcast episodes, and more.

1. Professional troublemakers should be celebrated.

When I think about dreaming audaciously, I think of the story of Summit and Powder Mountain. Summit is an organization founded by a group of white men who wanted to change the world. They invited their friends for weekends on a mountain they liked in Utah, and as they started going more frequently, they thought, “We’re here so often, why don’t we just buy the mountain and invite more friends?” So, they bought the mountain for $40 million, and now the headquarters of their invite-only social organization is there.

Did you know mountains are for sale? Turns out they are. When we go on trips and we have an amazing time, we might think, “Let me buy the mug that we used for breakfast.” Or maybe we’ll really splurge and buy the mattress we slept on—that mattress was great! We will think to buy the mattress. They thought to buy the mountain. That is the nerve and rashness we need, to think that these things are possible for all of us. It’s not that these men of Summit were smarter or braver than anyone else—it’s that they haven’t been programmed to expect less from the world like the rest of us have.

“We have a moral obligation to tell the truth, even when our voices shake.”

What are the mountains in your life that you could buy if you had the courage to dream audaciously? Start now, start today, start dreaming of the mountain—not the mattress. We need to cast that vision because the world we live in is built up by the people who think about mountains.

3. Speak hard truths, because they are necessary.

We fear the truth. The truth challenges us to change and be better, and those are tall orders. I often think of the words of the world-changing, good troublemaker, the late great John Lewis: “When you see something that is not right, not fair, not just, you have a moral obligation to do something, to say something, and not be quiet.” We have a moral obligation to tell the truth, even when our voices shake. Tell the truth even when it might rock the boat.

If we’re being real here, we’re often so afraid of the consequences that come with speaking up that we don’t think about what could actually be possible if the best-case scenario happens. So we opt out and stay silent. I’m not here to tell you that you need to go into rooms and start lambasting people, but I do want to share the three questions I ask myself before I say something that might shake the table:

It’s not foolproof—I still make mistakes. But if the answer is yes to all three of these questions, I say it and let the chips fall. It keeps my intentions in the right place, and it allows me to show up as the person I want to be in the world. The greater version of ourselves is the version that is willing to be courageous in tough moments. Be that person by speaking necessary truths.

“Failure is life’s greatest teacher, and the only way we truly fail is to learn nothing from those failures.”

4. Be willing to fail loudly.

Anyone who has done anything of note has failed. We need to fail loudly because it fosters growth. I write about one of my most soul-shaking failures in the book, and what matters in the end is not the failure itself, but what I learned in the process. I learned that none of us belong on pedestals. I’m not smarter than other people just because some folks follow me on social media. I will always show up in the best way I know how, but I am very clear that I will let people down and will mess up. I will also do my best to keep growing and will always hold myself accountable to who I say I am.

I learned that when we do mess up, part of that accountability is making a proper apology, especially when we have done harm. We have to remember that with greater platforms, greater visibility, comes greater responsibility. Our voices carry differently, and we have to act accordingly. That doesn’t mean we change our voice, but it means we move differently. You are not defined by your worst moment. Grace and accountability can coexist. Failure is life’s greatest teacher, and the only way we truly fail is to learn nothing from those failures.

Jim Rohn made popular the idea of “you are the average of the five people closest to you,” but for me, I’m the sum of the villages of people that have surrounded me throughout my life. How far I’ve been able to go has been directly tied to the people I’ve surrounded myself with. How big I dream is because of their confidence. My friends are my greatest challengers. We aren’t just the average of the people we spend time with—we are the representations of the people we claim. We represent those that claim us in return.

Your community and your tribe make life harder or easier. They open doors. They lend you courage. Pick the best people you know, and curate a crew of people who cheer you on, challenge you, check on you, create amazing things with you, build you up and champion you. That goes for friends, colleagues, and mentors—even those mentors you’ve never met, but have them on your personal advisory board. (Some of mine are here at Next Big Idea Club!) My squad contains those I’ve learned from and never met, and those who have become colleagues, advisors, and friends. My squad makes me better, challenges me, and champions me. Find the same for you.

To listen to the audio version read by Luvvie Ajayi Jones, and browse through hundreds of other Book Bites from leading writers and thinkers, download the Next Big Idea App today: