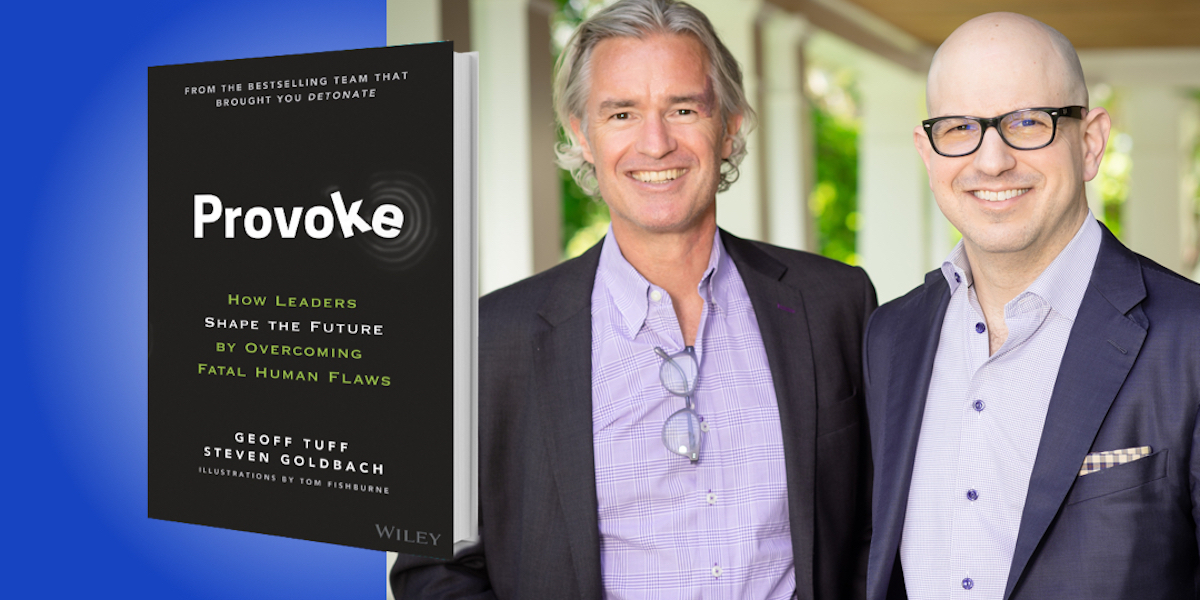 Geoff Tuff is a management consultant and a Principal at Deloitte, the world’s largest professional services firm. Steven Goldbach is Deloitte’s Chief Strategy Officer. Together they wrote the 2018 bestseller, Detonate: Why—and How—Corporations Must Blow Up Best Practices (and Bring a Beginner’s Mind) to Survive.

Below, Geoff and Steven share 5 key insights from their new book, Provoke: How Leaders Shape the Future by Overcoming Fatal Human Flaws. Listen to the audio version—read by Geoff and Steven themselves—in the Next Big Idea App.

1. Uncertainty is the air we breathe.

Uncertainty is increasingly the primary condition in which we operate, for business executives and for society at large. One of the reasons for this is that over the course of the last five or six years in particular, we’ve seen the world shift from being governed primarily by linear change to exponential change. In other words, change is accelerating. As that happens, we’re no longer in a world where we can predict with some degree of clarity what is going to happen and take measures to remove risk. Instead, we need to build new muscles to handle the barrage of uncertainty that comes our way.

2. Successful leaders manage the phase change from “if” to “when.”

The leaders who are best able to manage uncertainty are those who are able to recognize an important phase change in any given trend: When it goes from a matter of if it will happen, to a matter of when it will happen. Certain trends build up and gather momentum over time, but early on, there are still questions of whether they’ll ever become important enough to impact a particular business or society. That’s the “if” stage. Over time, some of those trends gather momentum and transition to the “when” stage. Those trends are definitely going to come to fruition. It’s just a matter of when.

“We need to build new muscles to handle the barrage of uncertainty that comes our way.”

Take the example of hybrid work. Prior to the COVID-19 pandemic, some people were working remotely, but most of us showed up to the workplace, in person, day after day. But the pandemic and the related lockdowns have provided proof that productive work can be done at home, and that there are benefits to that in terms of increased flexibility and saved commute time. Of course, there are also benefits to in-person collaboration, so we believe that a hybrid model of work will inevitably become dominant. It’s no longer a question of “if,” but “when,” and successful leaders will manage that transition.

3. We are usually blind to phase change.

Individual human biases interact with organizational tendencies to create blinders. These blinders prevent us from recognizing phase changes early enough to actually gain any advantage from them.

As the field of behavioral economics has demonstrated, individuals are subject to a wide range of cognitive errors, including the availability bias, the status quo bias, and the affect heuristic. Collectively, those individual biases can create organizational norms that leave companies blind to real-world problems. For example, the desire to not be embarrassed or to not embarrass others in meetings is something that prevents us from having real, honest conversations about data that might help us better see the phase change and deal with uncertainty.

“Cord-cutting”—the tendency for consumers to favor high-speed internet over traditional cable contracts—was a small but noticeable trend in 2008. But most cable executives who were presented with data on this trend were blind to its implications. As individuals they were prone to the status quo bias, the overconfidence bias, and others. As a result, their organizations failed to detect cord-cutting going from if to when, and they missed a chance to compete directly with Netflix and other streaming services that capitalized on the trend.

“Research has demonstrated that teams made up of people who think differently from one another perform better on complex and novel tasks.”

4. How to position yourself for phase change.

To remove organizational blinders and capitalize on the phase change from if to when, companies need to learn how to envision and position. “Envision” refers to the ability to do what’s often called “scenario planning”—creating multiple plausible versions of the future and creating plans around each of them. “Position” is the ability to pivot and change strategy as more data comes in and it becomes clearer which version of the future is, in fact, unfolding.

Once a trend is clearly on its way from if to when, organizations then need to drive, activate, or adapt. That is, they need to single-handedly drive the market to respond to an emerging trend, activate an ecosystem of actors to influence the marketplace, or, if all else fails, adapt to the realities of the trend.

A good example of someone with the ability to envision, position, and drive is Richard Barton, the man who created both Zillow and Glassdoor. Both companies emerged from Barton’s insight that technology was encouraging increased transparency in many industries, and that he could build multiple businesses around that growing demand for transparency, whether in real estate prices or salary information.

Diversity, equity, and inclusion are not just moral imperatives; they are also critical ways to overcome the cognitive biases and organizational tendencies that blind businesses to emerging trends. Research has demonstrated that teams made up of people who think differently from one another perform better on complex and novel tasks. In other words, if you want a better economic forecast, don’t add a sixth economist to the team—add a theater major.

Achieving cognitive diversity on teams usually requires diversity in hiring, bringing in people of different backgrounds and ethnicities. Some of the “provocateurs” profiled in Provoke are individuals who are actively working to broaden the pool of employees and create leadership opportunities for minorities and others who traditionally have been left out of corporate decision-making.

To listen to the audio version read by Geoff Tuff and Steven Goldbach, download the Next Big Idea App today: