The Puzzle Solver: A Scientist’s Desperate Quest to Cure the Illness That Stole His Son 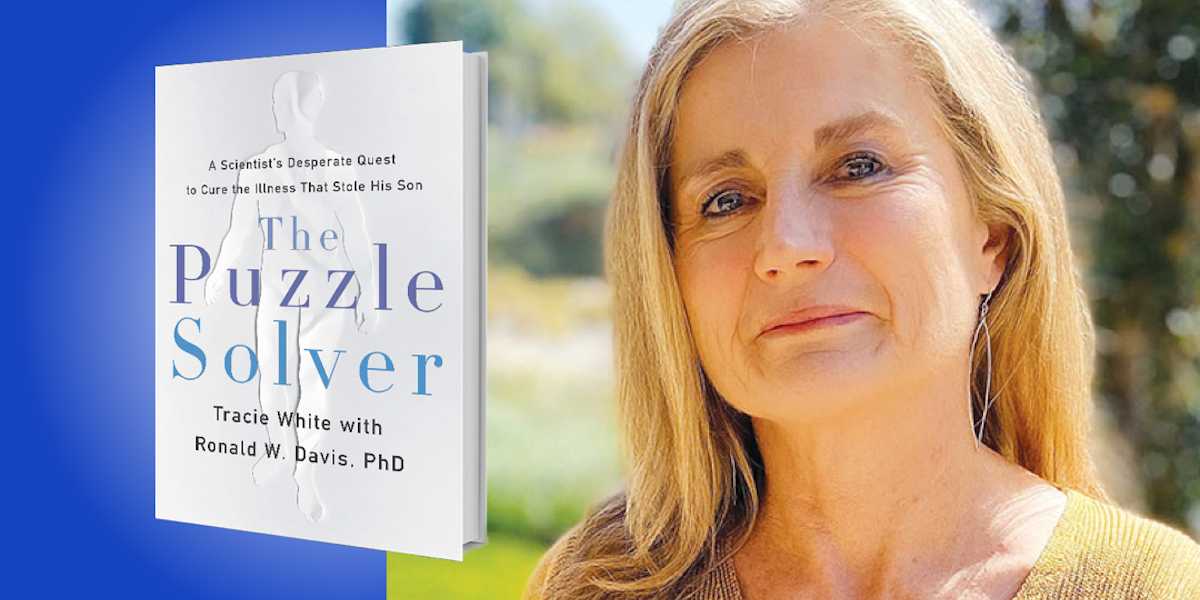 Dr. Tracie White is an award-winning journalist and a science writer for Stanford University. Her work, which has garnered 23 writing awards, has also appeared in Salon, the Los Angeles Times, the San Francisco Chronicle, and more. Ronald W. Davis, PhD, has been called one of the world’s greatest living inventors by The Atlantic. He is a professor of Biochemistry and Genetics at Stanford University and director of the Stanford Genome Technology Center.

Below, Tracie shares 5 key insights from the new book she wrote with Ron, The Puzzle Solver: A Scientist’s Desperate Quest to Cure the Illness That Stole His Son (available now on Amazon). Download the Next Big Idea App to enjoy more audio “Book Bites,” plus Ideas of the Day, ad-free podcast episodes, and more.

Next Big Idea Club · The Puzzle Solver: A Scientist’s Desperate Quest to Cure the Illness That Stole His Son

1. The words we use matter.

The Puzzle Solver tells the story of a young man who is severely ill with a disease that his father, famous scientist Ron Davis, is trying to cure. Myalgic encephalomyelitis/chronic fatigue syndrome (ME/CFS), as it’s now known, is a complex disease that often begins with symptoms similar to mono or a severe flu. The hallmark of the disease is a crushing fatigue that worsens with physical or mental exertion. There can be brain fog, GI problems, over-sensitivity to light and sounds, muscle pain, and dozens of additional problems.

During the first reported outbreak in the United States, no one knew what it was. It was called many things including, most mockingly, the “yuppie disease,” which referred to the supposed young urban professionals who were claiming to have this illness when their lives just weren’t going well. Other names for the condition have included “chronic mono,” the “Epstein-Barr virus,” and then the official name adopted by the federal government in 1988, “chronic fatigue syndrome.” That name has stuck for decades, and brought with it a stigma that refuses to go away. Hundreds of thousands if not millions of people sick with the disease have faced mockery and dismissal, jokes abound about having chronic fatigue when someone is a little tired. The name has ensured that it became a dismissed element in patients often marked as crazy or lazy. The power of just those two small words should awaken us to the importance of how we use our words.

“We cannot be a strong nation unless we are a healthy nation.”

Like ME/CFS, many people still believe that coronavirus is not a real disease—that it’s made up, that scientists can’t be trusted, and that science is a waste of taxpayers’ dollars. As a science writer, I’ve written many stories about the role basic science has played in curing disease and helping to stop human suffering. It’s often an extremely slow and difficult process, and it costs a lot of money. But the scientific process reveals truth; collecting data and observations, creating hypotheses and theories, and testing them through experiments is how the polio vaccine was created—and the new coronavirus vaccines as well. On the verge of World War II, Franklin Delano Roosevelt spoke to the nation from the steps of the National Institutes of Health. He said, “We cannot be a strong nation unless we are a healthy nation, and so we must recruit not only men and materials, but also knowledge and science in the service of national strength.”

Radical listening means listening without judgment, keeping silent, and giving your full attention so that the speaker will continue sharing. It means quieting your own mind and resisting the urge to respond with your own thoughts. Without it, so many stories would never be told.

“Those silenced by society often have the most important stories to tell.”

Ron’s son with ME/CFS, Whitney, is unable to eat unless he’s attached to a feeding tube. And for years he was unable to communicate much at all, until one day his parents discovered that the drug Ativan calmed his nervous system enough for him to communicate with his hands and facial gestures, at least for a few hours every month. When I set out to write this book about Whitney, he chose to spend some of the few precious hours available to him to tell me his story.

Listening is an underrated skill. For me, it means discovering hidden stories, particularly from those on the outskirts of society—those stigmatized by contested diseases, disabilities, or prejudice. Those silenced by society often have the most important stories to tell.

4. Find light in the darkness.

I learned from Whitney how he spent many hours each day, staring out sliding glass doors into his home’s backyard in Palo Alto. From his bed, he would gaze out at the African daisies and delphiniums. He told me about his past travels, his studies into Buddhism, and his activism. The story that really struck me was about a nest of wasps that had found their way into his bedroom closet. Ever so slowly, Whitney used his forefinger to tiptoe across his sunken bare chest, showing how he would lie still and watch as several of the wasps crawled across him. And he smiled—it amused him so much.

“By helping others, you often help yourself.”

In part, it is Whitney’s Buddhist beliefs that helped him find beauty in the darkest of places. It’s a skill that many of us have attempted to use to help survive the darkness of 2020, isolated at home with our fears about the future. Many of us, for example, have become obsessed with things like birds. Searching for beauty in pain is the lifeblood of so many musicians and artists, and for Whitney, his very survival depends on this crucial skill.

5. Grief is painful, but love is powerful.

When I was writing this book, I talked to a neighbor who was a therapist; it was her job to listen and offer help to those who are grieving. She commented on how far too often, she sees people run away from grief, abandoning loved ones, turning away from the pain because it’s simply too much to bear. But Whitney’s family chose to stand by their son, and do anything they could to help not only him, but also others like him. We worked together to help change the scientific community’s awareness of the disease, and to raise money for research. This process helped give them the strength to bear the daily suffering that they see Whitney going through. Indeed, by helping others, you often help yourself.