Quit: The Power of Knowing When to Walk Away 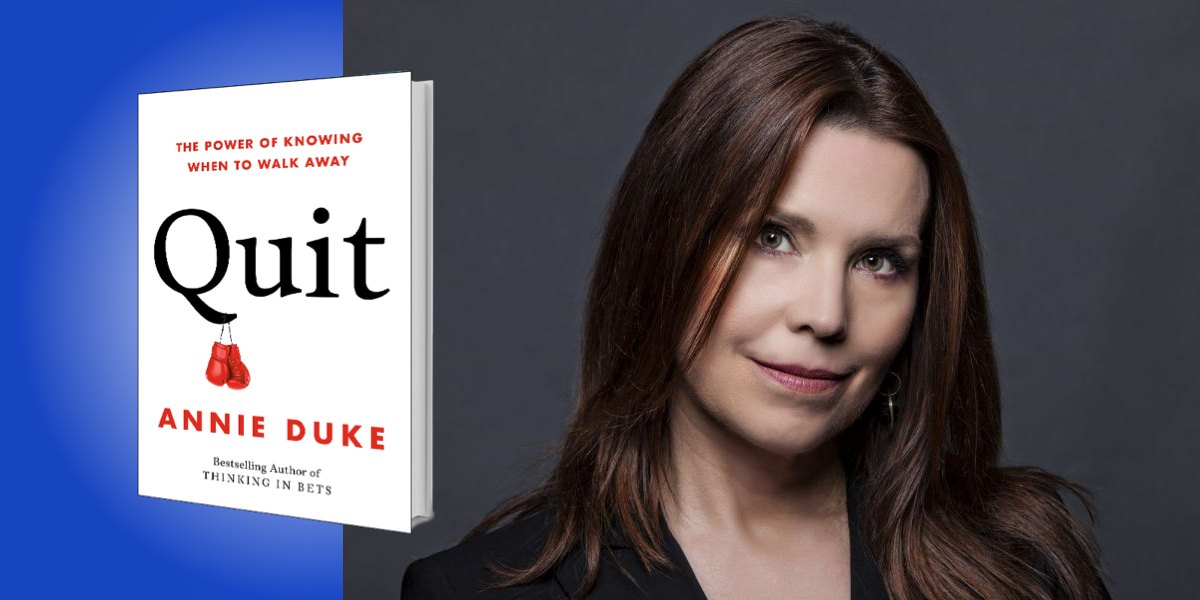 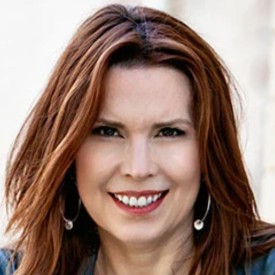 Annie Duke is the bestselling author of Thinking in Bets, How to Decide, and Quit. She is also a corporate speaker and consultant in the decision-making space. As a former professional poker player, Annie won more than $4 million in tournament poker before retiring from the game in 2012. She is the co-founder of The Alliance for Decision Education, a non-profit whose mission is to improve lives by empowering students through decision skills education.

Below, Annie shares 5 key insights from her new book, Quit: The Power of Knowing When to Walk Away. Listen to the audio version—read by Annie herself—in the Next Big Idea App. 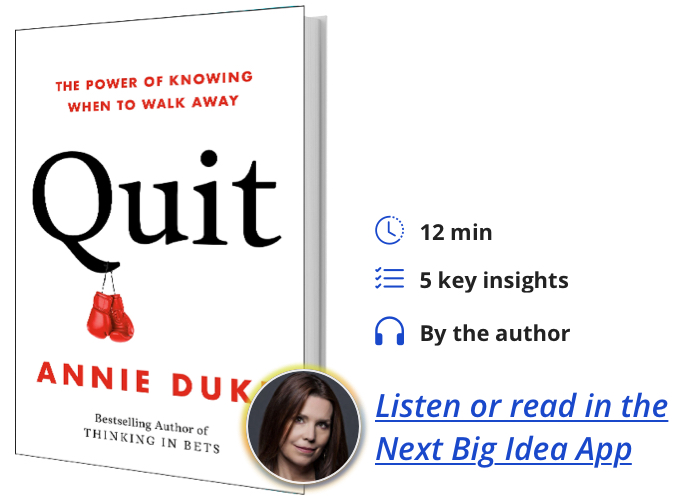 Quitting has a nearly universal negative connotation. In the popular mind, quitting means failing, capitulating, losing. Quitting is a weakness, a vice. If someone called you a quitter, would you ever consider it a compliment? The answer is obvious.

In comparison, grit is a virtue. Perseverance builds character. In fact, it is character. The ones who stick with it are the heroes of the story.

But it shouldn’t be this way, where grit is good and quitting is bad. Context matters. If you stick to something that is no longer worth it, like a dead-end job, a toxic relationship, or a stock that’s a loser, there’s nothing wrong with quitting. In fact, in those situations, there is everything right with quitting.

Having the option to quit and using that option well creates success because it makes it possible to combat the uncertainty you face whenever you make a decision to start something. When you make a choice, there is usually a whole bunch of stuff you don’t know. After you have started down a path, you’ll learn new information.

We’ve all had that feeling of, “If I knew then what I know now I would have made a different choice.” That’s the uncertainty that comes from how little we know hitting us in the face.

“Contrary to popular belief, quitting will get you to where you want to go faster.”

Quitting is the tool that allows you to make that different decision when you learn that new information. It gives you the ability to react to the changing landscape, improving and calibrating your decisions beyond what’s practical—or even possible—when making your original choice.

And that’s why quit shouldn’t be a dirty word.

2. Quitting on time will usually feel like quitting too early.

Paradoxically, the very uncertainty that makes quitting so valuable usually keeps us from taking advantage of it. It’s a decision we usually get to too late.

The problem is that just as the decision to start something is made under uncertainty, so is the decision to quit. That means that if you quit when the time is right you won’t know for sure that it is the best choice.

When it comes to walking away, which means abandoning all the resources of time, energy, money, and attention we have put into something, we have a need to be sure there is no other choice. That means we won’t walk away until it is a dead certainty that we can’t turn things around.

If you turn around on the mountain or leave your job or end your startup venture or shut down a business project, that’s when you go from the possibility of failure to having failed. That’s when you know for sure there is no recovering the cause. That is a moment we don’t want to face unless we know we have no other choice. And so we usually get to the decision to quit too late.

If we quit on time, however, it will feel like we quit too early because that will mean walking away when there is still some chance of turning things around. And as long as that chance exists, it will feel too early to give up the cause.

3. We think that when the world tells us it’s time to quit, we’ll listen. But we don’t.

We all share the intuition that when there are clear signals that what we’re doing isn’t working out, we’ll pay attention and quit. But we don’t. More than a half-century of research shows that, as a matter of human cognition, we regularly misinterpret, minimize, or ignore signals to quit. In fact, in the face of clear signals that quitting would be prudent, we escalate our commitment to these losing causes, doubling and tripling down rather than walking away.

This is in part because of the sunk-cost fallacy, where we irrationally take into account what we have already spent on an endeavor in deciding whether to keep going and spend more.

“Rationally, when making a choice about whether to stick or quit, what ought to matter is if the next bit of your time or effort, attention, or money is worth sinking into the cause.”

Consider this thought experiment: A band you love is coming to town for an outdoor concert. On the day of the show, a friend offers you a free ticket. But it is freezing cold, rain is pouring down, and that is expected to continue all night. Do you accept the ticket and go see the band you love, even though it means spending a whole evening soaking wet in the freezing cold?

My guess is that you would pass on the offer.

Now imagine that a band you love is coming to town for an outdoor concert. But this time, as soon as tickets go on sale, you purchase one for $125. On the day of the show, it is freezing cold and raining. Do you go to the concert?

Most people feel a much stronger pull to go when they have bought a ticket than when the ticket is offered for free.

Yet, in the second case, people are much more likely to choose to go, because they don’t want to waste the money they already paid for the ticket.

Rationally, when making a choice about whether to stick or quit, what ought to matter is if the next bit of your time or effort, attention, or money is worth sinking into the cause. But we worry that if we walk away, we will have wasted the resources we have spent in the trying. And that biases us against quitting.

4. When it comes to quitting, decide in advance.

As Nobel laureate Daniel Kahneman has said, the worst time to make a decision is when you’re in it, when you are facing down the choice. If you want to eat healthily, it is hard to make good choices about what to eat when a box of chocolates is sitting right in front of you.

The same is true for all decision-making, including quitting. It is hard to make a good choice about whether to stick or quit when you are facing down the decision to walk away. This is especially so because that is the moment you go from failing to having failed, when you cannot recover the cause. These doors are hard to close.

We know from the work on escalation of commitment and biases like the sunk cost fallacy that we are bad at paying attention to the signals that we should quit when we are in the middle of it. But the science also shows that if we imagine what signals we might see in the future that would tell us it’s time to walk away and write them down, this advanced planning will increase the chances that we’ll cut our losses when we ought to.

Essentially, when you make a decision to start something, you can imagine what you could find out later that would tell you the project is no longer worth pursuing. Once you establish these kill criteria, literally criteria for killing a project, changing your mind, or cutting your losses, you can commit in advance that you’ll walk away when you encounter them.

“It is hard to make a good choice about whether to stick or quit when you are facing down the decision to walk away.”

Kill criteria are one of the best tools for helping ensure that you quit sooner when persisting is no longer in your best interest.

For example, if you’re working at an entry-level position that has some prospect for advancement, figure out as early as you can the interim milestones for those who succeed, whether it’s raises, initial promotions, or additional responsibilities—whatever is specific to that company or practice. If you miss those marks, commit to initiating a new job search.

The good news about kill criteria is that you haven’t missed your chance to set them once you have already started an endeavor. At any point along the way, you can think about a future time frame and identify the benchmarks that you might miss or the signals that will tell you that you ought to walk away.

5. Get a quitting coach.

Another way to help with the problem of making decisions when you’re in it is to get an outside perspective. We’ve all been in that position where we see someone stubbornly sticking to something when it is clear they should quit, whether it’s a dead-end job, a toxic relationship, or a failing business.

Obviously, if you can see it when someone else is stuck, it stands to reason that other people can see the same thing when they look in on you. It is hard to see yourself clearly. If you find someone to help you with your quitting decisions, you can get that outside perspective that will help you make better choices.

Your quitting coach could be a friend, a mentor, a coworker, a sibling, or a parent. When you think about it, a therapist is part quitting coach.

The key to an effective relationship with a quitting coach is permission. You must give your coach permission to tell you the hard truths, even if those truths might hurt in the moment, because you know that is what is in your long-term best interest. Without this permission given, your coach will have a tendency to tell you what they think you want to hear to spare your feelings. They’ll have a tendency to cheerlead rather than tell you what they really see.

That’s why it’s so important not just to find someone who has your back but also to give them permission to say the hard things.

The fact is that quitting is hard. Whether you are thinking in advance about what might get you to walk away so you can get to the decision faster or you are seeking outside counsel, you need strategies to get better at walking away. The failure to quit costs us too much, both in time spent on paths that are going nowhere and in the missed opportunities that the failure to quit prevents us from pursuing.

We need to recognize that quitting is a skill. And we need to get good at it.

To listen to the audio version read by author Annie Duke, download the Next Big Idea App today: