The Reason for the Darkness of the Night: Edgar Allan Poe and the Forging of American Science 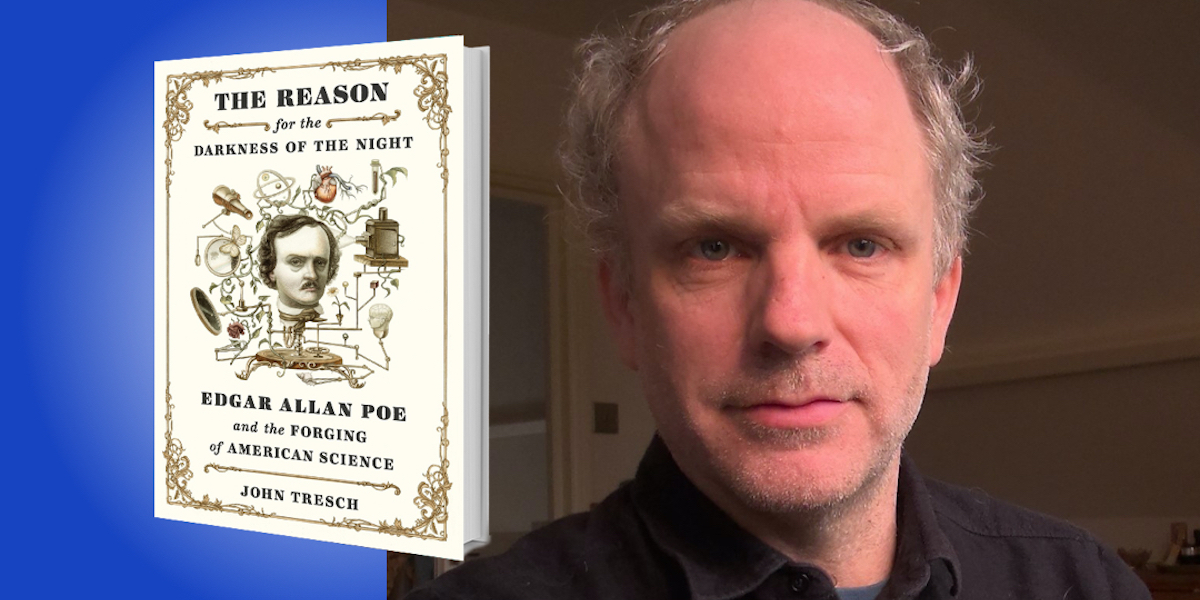 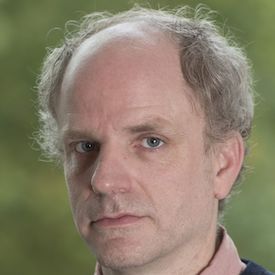 John Tresch is a professor of the history of art, science, and folk practice at the Warburg Institute at the University of London. He has spent his career analyzing connections among disciplines, and questioning our definitions and stereotypes of history. Through his passionate investigations, Tresch brings a new depth to lessons from the past, and reminds us of their relevance.

Below, John shares 5 key insights from his new book, The Reason for the Darkness of the Night: Edgar Allan Poe and the Forging of American Science (available now from Amazon). Listen to the audio version—read by John himself—in the Next Big Idea App.

Poe wrote the first modern detective story, The Murders in the Rue Morgue. Its hero was C. August Dupin, a ruined aristocrat who dabbles in math and poetry, and occasionally lends his talents to the Paris police. With his rapid twists and turns of thought and discovery, Dupin became the model for brilliant and eccentric detectives, from Sherlock Holmes to Columbo.

In The Purloined Letter, Dupin faces off against a sly government official who’s blackmailing the Queen with a compromising letter stolen from her chambers. Dupin thwarts him by locating the letter. But he doesn’t do it by inspecting every hidden recess of the minister’s office—that’s the method of the Paris police, who put a microscope to every crack and cranny of the house. Instead, Dupin finds the stolen letter exactly where the police would never think to look: hiding in plain sight, folded inside out and pinned to the minister’s mantelpiece.

How did Dupin make his discovery? First, he put himself into the mind of his opponent. He tried to think like the blackmailer would: He would know that the police expected the letter to be carefully hidden in some out-of-the-way place. So instead, he put it where the police would never find it: out in the open.

“Being able to grasp the obvious, to see the solution right in front of you, is a surprisingly difficult, but crucial, skill for solving problems.”

Poe was challenging the Greek philosopher, Democritus, who said that reason draws truth up from a deep well. Instead, Dupin said there “is such a thing as being too profound. Truth is not always in a well.” More bluntly he said, “it is almost impossible… to see a thing that lies immediately beneath one’s nose.”

Being able to grasp the obvious, to see the solution right in front of you, is a surprisingly difficult, but crucial, skill for solving problems.

Poe’s works show another side of creativity. He was fascinated by the paradoxical and incongruous. His imaginative stories constantly brought together ideas and images from far apart. His story, Hans Pfaall, depicted a voyage to the moon: It used well-known facts of physics to imagine a feat which, at the time, was impossible. The story was a model for Jules Verne, who many scientists and inventors have cited as their inspiration. Then, in The Gold-Bug, he combined his interest in cryptography, insect collecting, and travel reports to tell a prize-winning story that saved him and his family from starvation.

Poe’s outlandish tales and glittering poetry drew together elements no one had ever combined before. They showed the power of leaps of intuition—a kind of knowledge little understood by scientists and philosophers of his time who were advocating the step-by-step methods of thought known as induction and deduction. Well-informed, intuitive leaps were the kind of thinking, Poe said, that Johannes Kepler had used when he discovered his laws of planetary motion.

“Artists and scientists need to learn from each other, since reason and imagination, or what Poe called ‘analysis and ideality,’ have to go hand in hand.”

The biggest distance Poe crossed, again and again, was between art and science. He identified with both, and argued that creativity and aesthetic impact were essential parts of science. He also applied patient analysis, observation, and testing to his fiction and poetry. Artists and scientists need to learn from each other, since reason and imagination, or what Poe called “analysis and ideality,” have to go hand in hand.

We all know what it’s like to live through a media revolution. Online platforms have cranked up political polarization, creating a crisis of authority. With retweets, forwards, easy plagiarism, and shady sourcing, it can be hard to know who and what to trust. Science that doesn’t serve corporate or political interests can get dismissed as fake news. Movements for social justice, waves of populist reaction, and conspiracy theories have all been stoked by digital media.

Poe lived through a similar media revolution. In the early 19th century, attaching a printing press to a steam engine made it possible to churn out an unprecedented volume of magazines, newspapers, pamphlets, and books. News was rushed out by railroad, steamboat, and telegraph—and it was often impossible to know who had written what.

For science, this media environment was both stimulating and corrosive. Newspapers and lecture halls were filled with exciting scientific reports, performances, and debates. How old was the universe? How were electricity, magnetism, light, and heat connected? Why did new species suddenly appear or disappear?

“Method on its own—without the wisdom to know how, when, or why to apply it—is as worthless as a counterfeit coin.”

These were huge and important questions, being approached in lots of ways—by rigorous researchers, but also by cranks and charlatans. In Poe’s America, there were no national institutions or powerful organizations to separate well-tested science from humbug and quackery. Modern science was forged out of this messy and confusing crisis of authority. The groundwork for science as we now know it was laid by Poe’s contemporaries and colleagues.

Ironically, the media revolution of our time has begun to have the opposite effect: There’s a rising distrust and confusion about science itself. Suddenly, science’s authority feels fragile again— just at the moment when, with climate change and a pandemic, we need reliable science more than ever.

As a journalist, Poe reviewed new scientific works and helped make them accessible to wide audiences. The flood of printed information required, he said,“light artillery of the intellect; we need the curt, the condensed, the pointed, the readily diffused.” This would cut through the noise.

Writing for magazines up and down the East coast, Poe supported projects to raise the nation’s level of learning. He championed new scientific organizations and federally-supported research and exploration, like the US expedition to the South Seas. His novel, The Narrative of Arthur Gordon Pym, gave readers an insane vision of what such a journey might bring.

At the same time, Poe was wary about the growing faith that science alone had all the answers. To prove his point, he wrote hoaxes about technical feats that hadn’t really occurred—for instance, he convinced readers of the New York Sun that a hot air balloon had crossed the Atlantic, showing how easily people could be deceived by the rhetoric and conventions of science writing.

“The idea of unity of effect enabled Poe to construct his theory of the universe as an incredibly complex, but ultimately unified work of art.”

While he lived in Philadelphia, where Benjamin Franklin had published maxims for health and wealth, Poe wrote a scorching satire of the idea that all of life’s problems could be solved with a simple method—or an app or an algorithm, as we’d say today. Its main character, Peter Pendulum, claims to run his life like clockwork, but applies his simplistic formulas to hare-brained get-rich-quick schemes—starting fights and suing for damages, playing loud music so people will pay him to stop, breeding cats to sell to the cat catcher.

In short, method on its own—without the wisdom to know how, when, or why to apply it—is as worthless as a counterfeit coin.

Even if Poe was skeptical about simplistic schemes and overconfident technical solutions, he kept returning to one very simple principle: In every powerful work of art—or communication of any kind—each element had to contribute to a single, concentrated effect. In a story, this meant that every word, image, and sound had to be carefully chosen to heighten the reader’s interest, reinforce the central theme, and advance toward the conclusion. The ending might be shocking and surprising, but if you looked closely, you’d see it was set up and made inevitable by the tale’s tight construction. Poe called this principle “the unity of effect.” It’s an idea that journalists, lawyers, critics, artists, designers, programmers, and inventors might recognize.

Poe saw this principle as a way of testing not just artworks, but scientific theories. A good theory will be both concentrated and general; it summarizes well-established facts, without extra conditions or qualifications. At the same time, it can be applied to more and more phenomena, to unite wider and wider domains of reality. The idea of unity of effect enabled Poe to construct his theory of the universe as an incredibly complex, but ultimately unified work of art.

Whatever it is you’re making, you need to know what effect you want to bring about. Once you know that, at every step ask yourself, does this element contribute to that aim? If the answer is no, get rid of it. That’s what Poe meant by “the unity of effect.”

To listen to the audio version read by John Tresch, download the Next Big Idea App today: