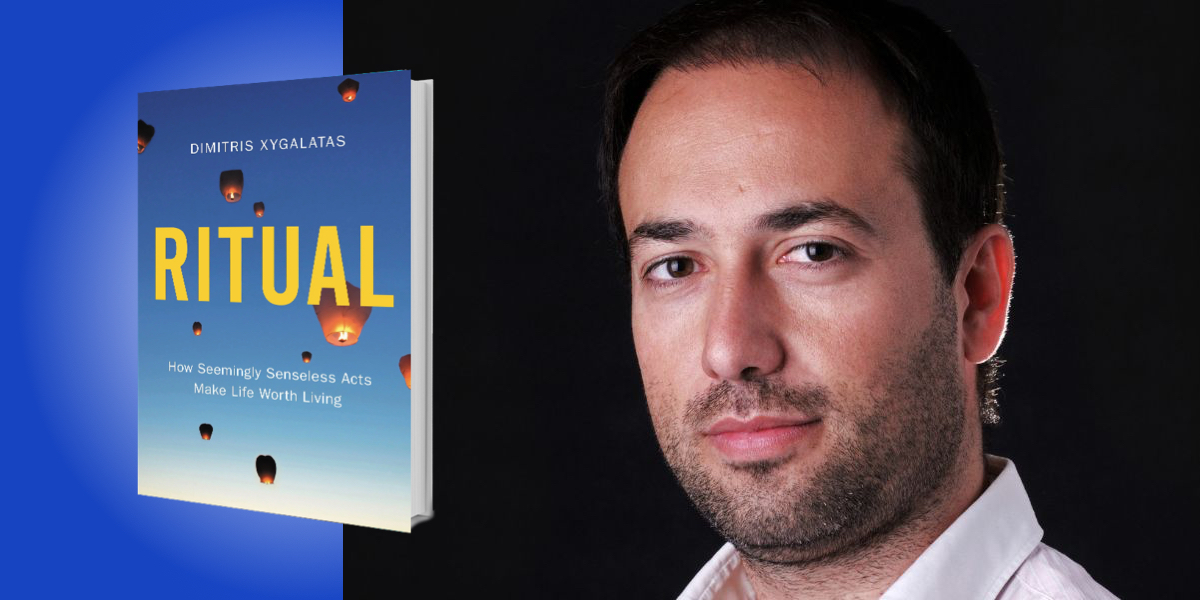 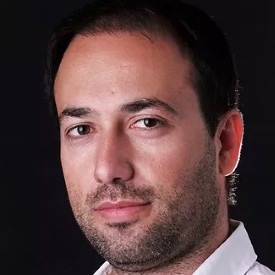 Dimitris Xygalatas is an anthropologist and cognitive scientist and director of the Experimental Anthropology Lab at the University of Connecticut. He has spent several years studying rituals in various parts of the world, combining ethnographic observations with scientific experiments. He has published over 100 articles and has been interviewed about his groundbreaking work by the New York Times, the Guardian, The Washington Post, The New Yorker, PBS, History Channel, National Geographic, and more.

Below, Dimitris shares 5 key insights from his new book, Ritual: How Seemingly Senseless Acts Make Life Worth Living. Listen to the audio version—read by Dimitris himself—in the Next Big Idea App. 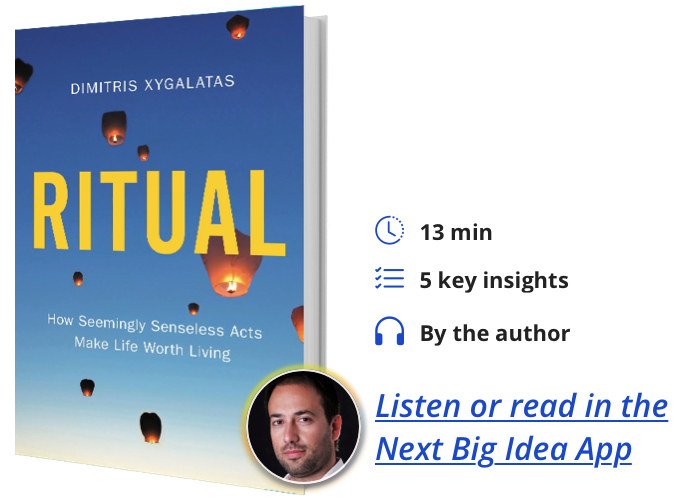 1. Ritual is at the dawn of civilization.

Göbekli Tepe is a remarkable archaeological site in Turkey. It is a massive mega-structure consisting of twenty circular chambers surrounded by enormous megalithic pillars, each over 20 feet tall and weighing 15 tons. They are sculpted in exquisite detail, depicting wild beasts and fantastical creatures.

But the most astonishing thing about this site is neither its enormous size nor its elaborate artwork. It is its age. Built 12,000 years ago, this is the earliest known ceremonial structure in the world. In fact, it is so ancient that it pre-dates all of the hallmarks of civilization, including writing, pottery, the wheel, and even agriculture and permanent settlement. This means that it was erected by hunter-gatherers, who must have spent years building it without any advanced technology. These people then traveled thousands of miles to visit this site and perform their ceremonies. And it was not until several hundreds of years later that we find the first signs of habitation in the area.

The discovery of this and other similar sites raises an astonishing hypothesis. For centuries, we believed that farming and permanent settlement, which allowed for the creation of a food surplus, led to civilization and all that comes with it: law, religion, and complex social organizations. But according to Klaus Schmidt, the archaeologist who excavated Göbekli Tepe, it was the other way around: “first came the temple, then the city.” It was a spiritual rather than a material need that led people to abandon their nomadic lifestyle and live in large groups. If this interpretation is true, then a major chapter in the history of our species needs to be revised. What if the irresistible urge that created the first great civilizations was not hunger for food but the thirst for ritual?

“It was a spiritual rather than a material need that led people to abandon their nomadic lifestyle and live in large groups.”

This, in turn, raises the question: why do humans care so deeply about ritual?

2. Ritual is a mental technology.

Uncertainty is stressful. You see, our brain is a predictive device. Rather than passively absorbing information, it makes active inferences about the state of the world. It uses prior knowledge and cues from the environment to anticipate what is coming. To catch a ball, we must predict, given its current trajectory and everything we know about how solid objects behave when thrust in the air, where it will be in a few seconds. If we see someone looking very angry, we expect them to say or do something nasty. Being able to make these kinds of predictions has obvious adaptive value. But one downside of having a predictive brain is that when we have low predictive control (i.e. when there is uncertainty), we experience anxiety. And here is where ritual comes in.

By definition, rituals are highly structured. When we perform a familiar ceremony, we know exactly what will happen and how. To our brain, this can be really soothing. This is why we find that in some of the most stressful contexts, such as warfare, illness, important exams, athletic competitions, or gambling, people perform more rituals. And this, it seems, can actually help them manage their anxiety. In both lab and real-life studies, we are finding that after performing ritualized behaviors people have lower cortisol levels, decreased electrodermal activity, and increased heart rate variability — and at the subjective level, they simply feel calmer. All this is evidence that ritual improves our ability to cope with stress. Its predictable nature helps provide a sense of control, and it doesn’t matter whether this control is real or illusory – its soothing effects are just as real.

3. Ritual is a social technology.

We humans are social—in fact, hyper-social—creatures, and so most of our rituals take place in social contexts. It is in those contexts that the full potential of ritual reveals itself.

“When people take part in collective ceremonies, their heart rates begin to synchronize, and the more invested they are in those traditions, the stronger the effect.”

For a long time, social scientists have referred to collective rituals as social glue, arguing that they play a crucial role in maintaining social order, by forging and strengthening social bonds between participants. Sociologist Emile Durkheim, for instance, described a phenomenon he called “collective effervescence”, an ecstatic feeling of togetherness that is created when people gather to perform emotional rituals. He described it like a jolt of electricity energizing those who take part in those ceremonies, bringing their emotions into alignment and transforming a crowd of individuals into a cohesive whole that is greater than the sum of its parts. For a long time, however, this idea remained elusive. After all, how can we measure things like togetherness, or emotional alignment?

With the help of wearable technologies, we are now able to test Durkheim’s ideas. Indeed, we are finding that when people take part in collective ceremonies, their heart rates begin to synchronize, and the more invested they are in those traditions, the stronger the effect. This has upstream consequences, creating more transformative experiences, and leading those who are more synchronized to feel more bonded with other group members.

By coordinating our appearances, our movements, our behaviors, and our emotions, collective rituals are able to coordinate our minds, and our very sense of self, causing us to feel like one with our group.

Rituals create meaningful experiences that form part of our autobiographical self—the very sense of who we are as a person and how we relate to others. Across all human societies, some of the most important moments of our lives are symbolically marked by rites of passage. These ceremonies also define our most important social relationships. After all, the only times an extended family truly comes together as a family is to partake in celebrations, from weddings and funerals to Thanksgiving and other seasonal holidays. All those rituals are designed to stimulate the senses, bursting with colors, music, food, smells, and (often literally) bells and whistles. This kind of sensory extravagance triggers psychological processes related to how we appraise and appreciate things and situations. To our brain, this pageantry is a signal that something important and meaningful is going down. Ritual is meant to transform the ordinary into something special.

Try to think about some of the most meaningful moments in your life. The times you felt joy, fulfillment, ecstasy, transcendence, awe, accomplishment, and community. Chances are, many of those moments were in the context of some collective ritual—a wedding, a graduation, a sporting event, a festival, an artistic performance. Those are the moments that make us truly human.

“Sensory extravagance triggers psychological processes related to how we appraise and appreciate things and situations.”

Indeed, in situations when we are deprived of ritual, we may feel like we lose part of ourselves. This is what happened during the recent COVID pandemic. Around the globe, people went to great lengths to regain those meaningful moments. Some took great risks, including fines or infection, to attend collective ceremonies; and others invented new rituals or redefined old ones. Ritual, it turns out, is simply too important to give up.

It is thanks to this power of ritual to soothe, connect, and inspire human beings that religious and state ideologies have always tried to claim a monopoly on it. So much so that we may sometimes get the impression that, as our societies are becoming more secular, ritual no longer plays a central part in our lives. But nothing could be further from the truth. The human need for ritual is primeval. Ceremonies have survived for millennia because they address key human needs. Thus, the void created by the retreat of religious ceremonies is inevitably filled as other domains of life become more and more ritualized. These secular rituals may at first glance appear different but, at their core, they fulfill the same roles.

In our own societies, we may no longer see courtship rituals around campfires, but they still take place in dance floors in almost identical forms. The religious services that were once the meeting places for the entire community may be replaced by the regular ritualized gatherings performed in the workplace. Musical concerts and festivals resemble the celebrations of ancient orgiastic cults. And in the ritualized gatherings of sports fans, we find echoes of ancient war rituals.

In its myriad forms, ceremony is a primordial part of human nature, one that helps us connect, find meaning, and discover who we are: we are the ritual species.

To listen to the audio version read by author Dimitris Xygalatas, download the Next Big Idea App today: