To Rule the Waves: How Control of the World’s Oceans Shapes the Fate of the Superpowers 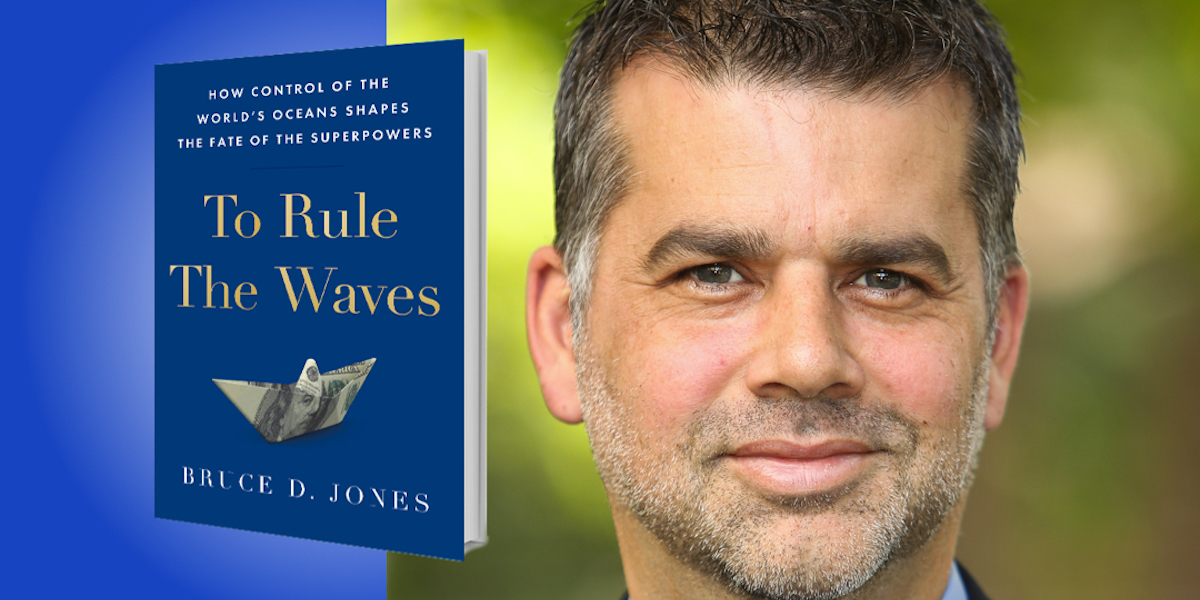 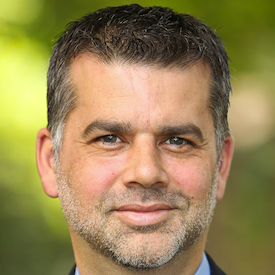 Bruce Jones directs the Project on International Order and Strategy of the Foreign Policy program at the Brookings Institution, where for four years he was also vice president. He has lived and worked in Asia, Africa, and Europe, including serving with UN operations in Kosovo and the Middle East. He has also been a senior advisor to the World Bank, and has lectured or been a nonresident fellow at Princeton, Stanford, Yale, and New York University.

Below, Bruce shares 5 key insights from his new book, To Rule the Waves: How Control of the World’s Oceans Shapes the Fate of the Superpowers. Listen to the audio version—read by Bruce himself—in the Next Big Idea App.

Since the late 1500s, no state, empire, or nation has commanded the heights of global power without wielding a globally dominant navy. Up until the 1500s, we cannot make that claim, because the world was not yet connected. The Islamic world dominated the Indian Ocean; European empires competed via land wars on that continent; the Americas were ruled by a series of inland empires limited to their own boundaries. The advent of a truly global world came only when the Portuguese found the sea route to Asia, finding that if they sailed their boats further west into the Atlantic, they would catch what became known as the “trade winds,” which would fling them down and around the Cape of Good Hope, and into the Indian Ocean.

Thus began the first, violent, encounters that shaped the modern world. In their wake followed the Dutch, briefly, and then the English, who by the 1600s had launched their bid for a global network of trading outposts, and then an empire: in the Americas, the Middle East, Africa, and India. And later, fatefully, in China—via that most rapacious of encounters, the Opium Wars, by which the East India Company and the Royal Navy forced the Chinese to open their markets to “free” trade, and compelled them to sign the Treaty of Nanking and the Treaty of Bogue—two treaties whose provisions can still be found in modern trading documents of the WTO. The two treaties also began what the Chinese still call the “Century of Humiliation”—a period of internal decay and subjugation to outside rule. It was a century in which two world wars were fought, the first triggered in substantial part by a naval arms race between Britain and Germany. And the second saw the United States Navy take over the position from its British counterpart as the world’s globally dominant naval power.

“When we hear the word ‘globalization,’ we think of airplanes and high tech and global finance, but fully 85 percent of global trade moves by sea.”

When we hear the word “globalization,” we think of airplanes and high tech and global finance, but fully 85 percent of global trade moves by sea. Giant ferries known as “ro-ro ships” move the world’s supply of cars from manufacturer to final market, and giant container ships supply most of the world’s consumer goods.

In the book, I take you to several places where we can see this unfold. To Tanjung Pelepas, on the Malaysian shore, adjacent to the Singapore Strait, now the busiest shipping lane in the world. I take you to the Port of New York, and show how the Coast Guard has developed literally global capacities to secure container freight. And we go inside the Customs and Border Patrol facilities where container freight is inspected—and where you can see the vast diversity and supply of goods, every facet of American appetite and vice on display, from kumquats to Timberlands to paper towels to medical equipment to seized cocaine. I take you to the container terminal of Donghai, 30 miles south of Shanghai, now the largest port in the world—6 times larger than its nearest American competitor. And I take you on a voyage from Singapore to Shanghai aboard one of the world’s largest container ships—a behemoth of a boat, fully twice as large as the largest aircraft carrier in the American fleet—carrying no less than 20,500 containers worth of goods, a floating cathedral of globalization.

Along the way I try to capture what’s truly at stake for the American economy—as both market for and financier of this vast trading enterprise, which now encompasses virtually the entire global economy. Among the stakes are technology and high finance, both of which are dependent on the global flow of data, a whopping 93 percent of which flows across the oceans via fiber-optic cables that line the sea floor. And then there are energy goods; two-thirds, perhaps as much as three-quarters of the world’s supply of oil and gas is either found at sea or moves by sea to its final destination. And the country most vulnerable to interruptions to the flow of oil and gas by sea? China.

3. We are already in a global naval arms race.

China’s import dependency is an important reason why, starting in the 1990s and gathering steam in the 2000s, it began to invest more heavily in its navy. It had not done so literally for centuries—not since the early 1500s had China sustained a blue water navy. In the early years of Communist China, it was preoccupied with inland defense, then with protecting itself against what it calls “the near enemy”—the Soviet Union, or Russia—along its northern border.

“As China opened to the global economy, it began to realize that its economic future was all about sea-based trade.”

But as China opened to the global economy, it began to realize that its economic future was all about sea-based trade. The giant container ships I described above are quite literally what made China’s economic rise possible. Containerization created transport efficiencies of roughly 17,000 percent since World War II, essentially erasing the transportation cost as a factor in competition. But as they grew, they became more dependent on imports and more dependent on the flow of energy into their markets, and that made them more dependent on the security role of the US Navy. It was a very uncomfortable position.

What follows was a deep change in Chinese strategic thinking: from deep inland defense to coastal defense to defense of the near seas to an effort to dominate the near seas and now to an effort to project naval power to the “far seas”—specifically the Indian, Arctic, and Pacific Oceans. China has begun to lay down the infrastructure of a civilian and commercial maritime network, one that could rapidly be turned into a global network of bases. This is no easy task—China has many challenges in front of it in developing a blue water navy. But it is working the problem, and hard.

At the same time, Russia has redeveloped some of its former naval reach. China’s naval growth has unsettled Japan, which still has a powerful navy, which it is starting to unshackle. India is racing to catch up. Former European naval powers are striving to regain some of their former reach. And the dangers of all this are rapidly mounting.

4. The US Navy is struggling to keep up.

In the book, I spend some time aboard the USS John Paul Jones, a guided missile destroyer based in Pearl Harbor, Hawaii that’s a key part of the defense against an ambitious Asian naval power. I take the reader inside its Combat Information Center, which serves as the information and targeting hub of a vast array of radar stations, satellites, aircraft, and ships that together make the complex network by which we track and target the Chinese, Russian, and other navies. These systems are key to our ability to continue to project power around the globe, from the Southern Ocean to the Arctic.

“We live our lives on land, but the way we do so is fundamentally shaped by the chemistry and currents of the oceans—and those are changing in worrying ways.”

The other key asset: our nuclear submarines. During the Cold War, nuclear missile-launching submarines were our last line of defense, the most survivable part of the nuclear triad. For most of the past 40 years, we haven’t had to worry much about our nuclear submarine fleet, but they are back in play. As part of the reporting for this book, I went to an amazing facility in northern Norway, a submarine base literally carved into the deep of a mountain, covered in every direction by a thousand feet of granite, protected by steep fjords and high-tech defenses. It was like walking onto the set of a James Bond movie, except that it’s very real. And for the first time since the wind down of the Cold War, US nuclear-powered submarines are docked there anew, once again patrolling the Arctic waters to keep a watchful eye on Russia’s expanding activity there—as well as China’s growing presence.

5. The oceans profoundly shape our climate.

We live our lives on land, but the way we do so is fundamentally shaped by the chemistry and currents of the oceans—and those are changing in worrying ways. Intriguingly, a lot of what we know about the changing climate is thanks to ocean sciences, and specifically because of experiments and investments backed by the Office of Naval Research, which emerged from World War II as the most important source of government-backed science. That evolved into a remarkable network of oceanic and atmospheric studies institutes, both naval and civilian, government and private, across the entirety of the United States—and now, increasingly, also around the world.

The ocean sciences are fundamental to our understanding of the long-term impact of burning fossil fuels. What we know now is that around 90 percent of the excess heat generated by the burning of fossil fuels this century has been absorbed by the oceans. But that process is starting to run its course, and the oceans are warming up—and that has consequences for currents and sea level rise that will be somewhere between bad and devastating.

Many hope that the severity of climate change will cause countries like the United States and China to leave rivalries aside and cooperate for the common good. But what I chart in the book is a second dynamic, where the nearer-term consequences of ocean warming are just as likely to fuel rivalry and competition. I worry a great deal about a scenario I call “come hell and high water,” where geopolitical and commercial rivalries between the top powers forestall deep cooperation, and we get both conflict and a climate crisis.

To listen to the audio version read by author Bruce Jones, download the Next Big Idea App today: