Rules: A Short History of What We Live By 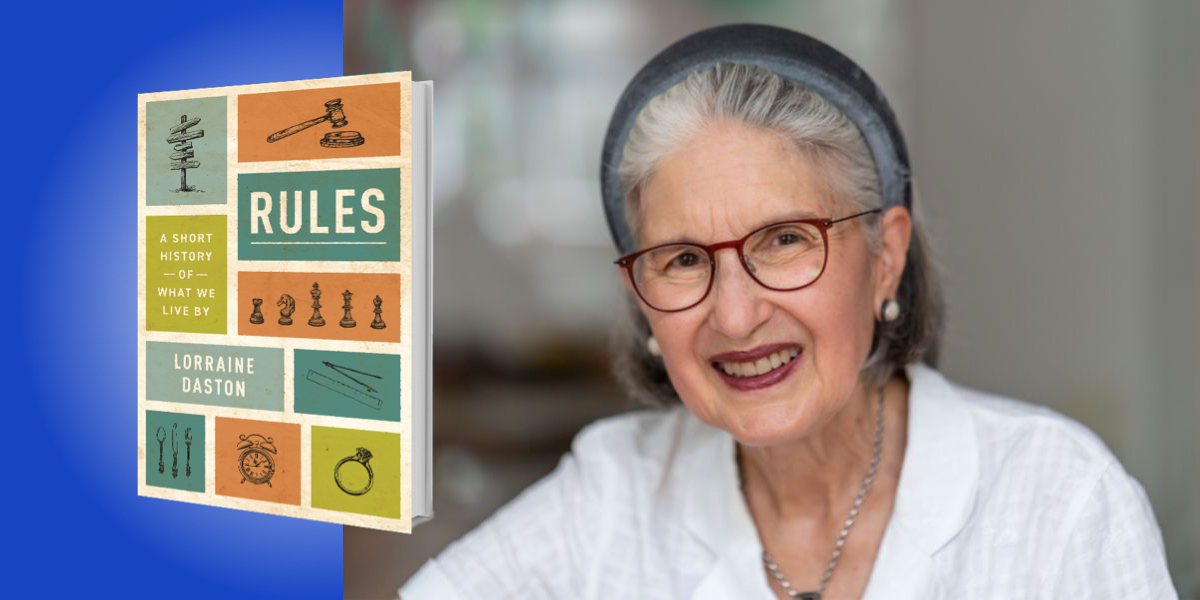 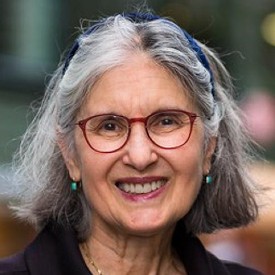 Lorraine Daston is an authority on European scientific and intellectual history. She is a visiting professor in the Committee on Social Thought at the University of Chicago, and Director emerita of the Max Planck Institute for the History of Science in Berlin.

Below, Lorraine shares 5 key insights from her new book, Rules: A Short History of What We Live By. Listen to the audio version—read by Lorraine herself—in the Next Big Idea App. 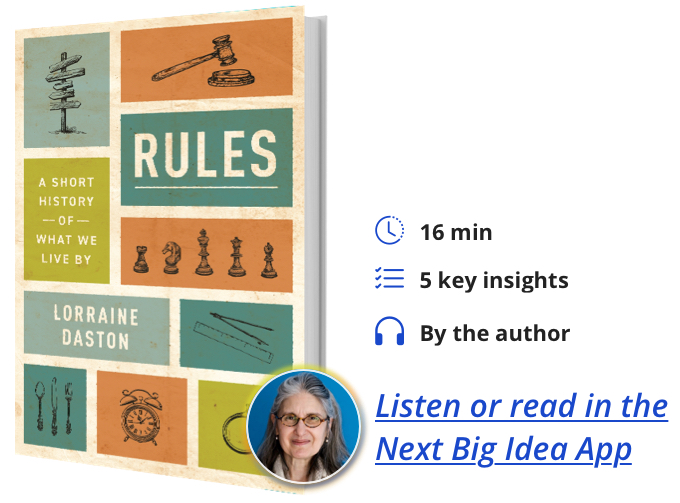 Children do not learn the rules of their culture by memorizing books of etiquette or even by listening to their parents tell them to say “please” and “thank you” hundreds of times. They observe and imitate how those around them behave: older siblings, kids at the playground, parents, and teachers.

Adults learn this way, too. Imagine that you’re visiting a restaurant in a foreign city. You observe how the natives behave: do they wait to be seated by the staff, or do they select an empty table themselves? Do parties sit by themselves at their own table, or do they join strangers at a shared table? Will the waiters come to you unbidden, or are you expected to wave them down? You watch and model your behavior on those around you, usually without ever having to consult a travel guide or a native informant about the rules.

But what about when rules are explicit and enforced—say, the speed limit on the highway? There is definitely a rule book for traffic regulations, and anyone wanting a driving license had better study it carefully. Yet in practice, there is often a margin of uncertainty. The sign says the speed limit is 70 mph, but there is an unspoken local rule about how many miles over (or under) the limit will be tolerated on that stretch of road. So, drivers model their speed on that of the cars around them—and for good reason. Failure to adapt to the local rule can be dangerous, causing the kind of chaos that speed limits are meant to avoid.

Rule books and models work in tandem, even in domains with clear and strict rules. Take the case of mathematics. Remember how you learned to solve word problems? By working through many examples. Ancient texts from many cultures show that this is the way the rules of mathematics have been taught for thousands of years: by modeling how to apply the rules in practice. Rules in the book need models in the world in order to become rules in practice.

2. There are thick rules and thin rules.

Thin rules are like the rules of chess. For example, the rule that says you may move the piece called a bishop diagonally in any direction, and that a bishop is a piece that is worth more than a knight, because a knight’s L-shaped movements are more limited. Thin rules are clear and unequivocal, meant to be followed without any ifs, and’s, or buts. Rules of games nowadays are almost always thin rules.

But if we leaf through rule books for games written several hundred years ago, the rules become thick. Take our chess example: older rule books also tell you how to move your bishop and your knight, and that your bishop is a more valuable piece than the knight. But the rule doesn’t stop there. It goes on to describe situations in which you should be ready to sacrifice your bishop to take your opponent’s knight if your opponent seems psychologically attached to the knight. These are rules that anticipate situations that might require bending or breaking the rule. Thick rules are upholstered with examples, caveats, observations, and exceptions. They foresee wide variability in circumstances that require nimble adaptation.

The contrast between thick and thin rules is also a contrast between the worlds for which they have been formulated. Thick rules are for a world of high variability, instability, and unpredictability; thin ones are for a world in which the future can be reliably extrapolated from the past, standardization ensures uniformity, and averages can be trusted. At any moment, a world of thin rules can turn into a world of thick rules. Just think about what happened to the thin-rules-world of just-in-time supply chains during the pandemic.

3. How to deal with exceptions to the rules.

Thick rules try anticipating exceptions; thin rules ignore them. But there’s never been a part of the human world that’s been so stable, orderly, and predictable that exceptions to the rules disappear entirely. Life is full of surprises. What happens when a thin rule—and not just any trivial thin rule, but an important one we all believe in—is challenged by an exception?

Thou shalt not steal. This is a thin rule, glass-clear, and without qualifications. It is also an important rule, honored and enforced by many cultures, ancient and modern. But: the poor man who stole a loaf of bread from the rich man’s table was starving and could get no work; the rich man will not even notice his loss. Should the poor man be punished as a thief with the full severity of the law? Or should an exception be made in the name of mercy and a higher justice?

“In a world that runs mostly by thin rules, exceptions have become increasingly intolerable.”

This is the kind of dilemma that has troubled moral philosophers, theologians, judges, and novelists for centuries. Some societies have taken the bull by the horns and established special institutions to handle such hard cases. In pre-modern England, such cases might be referred to the courts of equity rather than the common law courts. In other countries (like the United States) an executive pardon might soften the court’s verdict when law and justice diverge in a particular case. But the discretionary authority of these institutions has been increasingly criticized as arbitrary. In a world that runs mostly by thin rules, exceptions have become increasingly intolerable. Even if the world isn’t predictable, the rules and their enforcement should be. Algorithms (the thinnest rules of all) leave no wiggle room for exceptions.

4. The more specific the rule, the more likely it will fail.

Aren’t rules that bristle with specific details the ones that have closed all the loopholes? Well, take the case of rules for regulating what people can and can’t wear. Such official regulations are rare in modern societies, but anyone who went to school with a dress code is familiar with these rules—and with the problem of getting people to obey them. Let’s say that the principal banned the latest teen fashions: short shirts that expose the belly button and long pants that drag on the ground. Within months, some even more outrageous fashion will have swept the school, making the old rules obsolete. Because the rules are so specific, they can’t be stretched to cover the latest crazy style. The school authorities will be caught in an endless game of catch-up. Worse yet, the rules forbidding some items may accelerate the invention of new, more extreme fads.

This was exactly the situation in much of Europe for almost five hundred years. When cities like Florence or Augsburg or Paris became prosperous in the Middle Ages, the temptation for richer residents to splash out in splendid outfits cut in the latest style became irresistible. Municipal authorities took a dim view of such extravagance: frugality, modesty, and knowing one’s place in the social hierarchy were all threatened. So, they began issuing maniacally detailed rules about who could wear what on what occasion. No more slashed sleeves and pointy beaked shoes; no fur trim except for the nobility (but the mayor’s wife was allowed to line her cloak with squirrel fur); no red ribbons on robes unless the wearer had a doctorate in theology; and on and on. No Vogue editor covered the catwalk in greater detail than these medieval rules, which were crammed full of specifics about lace trim, gold buttons, and whatever else was all the rage circa 1400.

The result was the same as with the school dress code: as soon as one fashion was banned, ingenious tailors and their customers came up with a new one. If beaked shoes were forbidden, the next season’s shoes would feature buckles and rosettes. The rules fed the fashion frenzy they were meant to squelch. Rules that are too specific can easily be evaded by changing the specifics.

“Thick rules create a flexible order out of a disorderly world, but thin rules need an order that already exists in order to function at all.”

If you’re thinking that modern rules have outgrown this medieval folly, think again. We may no longer have regulations that tell citizens who can wear what, but the fiendishly detailed tax codes of many modern countries have set the same kind of arms race in motion. Legislators scramble to plug loopholes opened up by clever accountants exploiting every ambiguity not yet expressly prohibited. The result is a tangle so complicated that it creates even more ambiguities for accountants to exploit. The more specific the rule, the easier it is to evade, given strong incentives and a little ingenuity.

5. Algorithms are the thinnest rules of all.

An algorithm must be completely unambiguous, otherwise, a machine could not follow it. The easiest examples are the oldest of all algorithms, the rules of simple arithmetic: addition, subtraction, multiplication, and division. If you specify the numbers and the arithmetic rule then the result is entirely determined. Some of the first machines invented to execute algorithms were calculating machines.

We live in a world in which algorithms executed by computers perform much more complicated tasks: everything from booking a plane flight to recognizing faces. Yet these algorithms are still thin rules, and they require a stable, predictable, uniform world. Even machine learning algorithms are trained on a selection of data from the past, and if there is a sudden rupture between past and present (say, a global pandemic) or if the selection isn’t representative (it contains mostly male faces), then the algorithm is worse than useless. It takes a lot of work to make the world safe for thin rules like algorithms. Thick rules create a flexible order out of a disorderly world, but thin rules need an order that already exists in order to function at all. It’s the achievement of history that human societies have created islands of stability and predictability out of an ever-changing, helter-skelter world. But as recent events have taught us, those islands are fragile and precarious.

To listen to the audio version read by author Lorraine Daston, download the Next Big Idea App today: