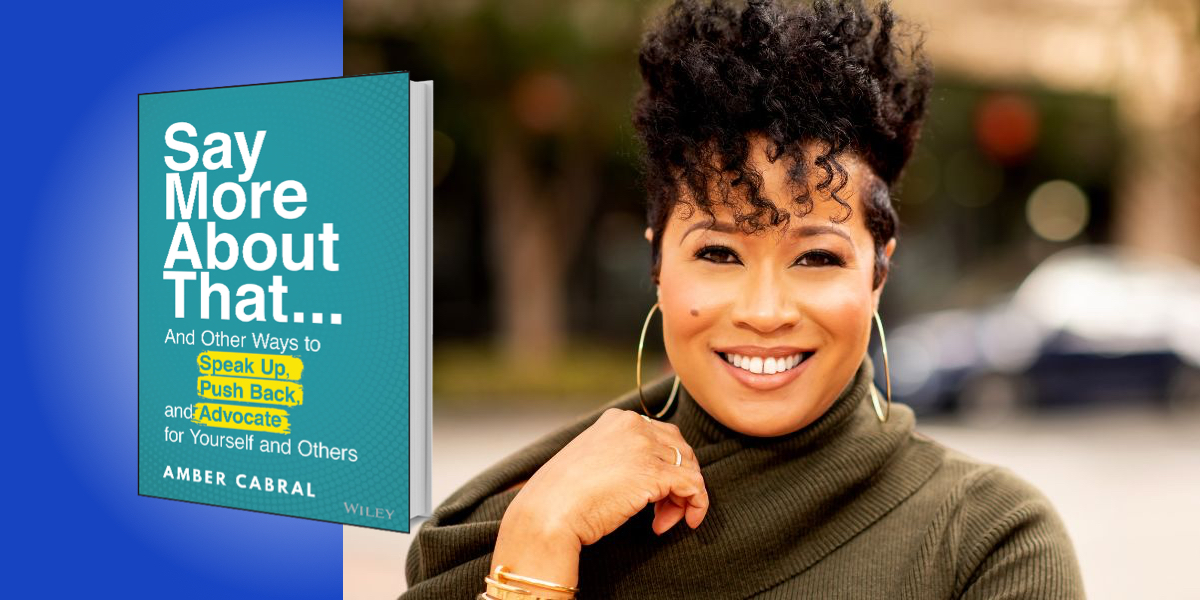 Amber Cabral is an inclusion and equity strategist who works with Fortune-ranked organizations though her company, Cabral Co. She delivers training, develops DEI strategy, and does one-on-one coaching for executives.

Below, Amber shares 5 key insights from her new book, Say More About That: …And Other Ways to Speak Up, Push Back, and Advocate for Yourself and Others. Listen to the audio version—read by Amber herself—in the Next Big Idea App. 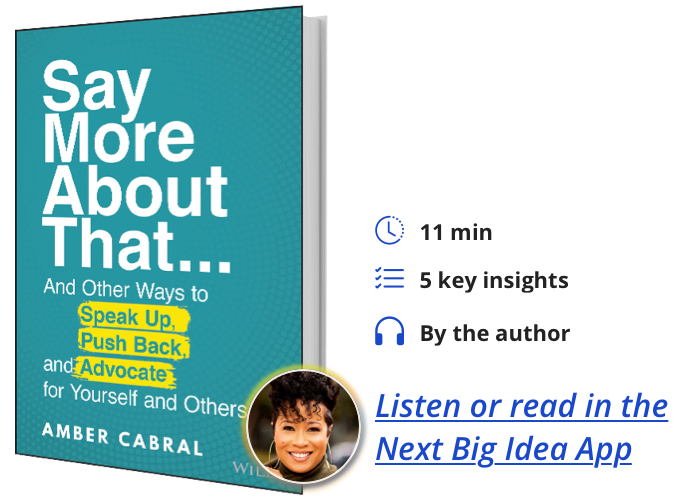 1. Understanding your privilege is key to being an impactful ally.

Privilege is often thought of as people who have access to things others do not: wealth, opportunity, resources, and even safety. But everyone has some privilege. It could be the privilege of speaking the language most common in your community having easy access to clean running water, or maybe being able to afford a high-quality education.

Allyship asks for those with privilege and power to learn about the experiences of others and develop empathy for those experiences in order to identify how to extend that privilege. So, identify where you have an ease that others do not and extend support to those who do not have that same access. That is allyship. It requires clarity on your own privilege first.

“Everyone has some privilege.”

Privilege is only seen as a problem when folks don’t do the labor of recognizing how they can use it to improve conditions for less privileged folks.

2. Use powerful questions, tone, and body language to your advantage.

Powerful questions are those which exhibit curiosity. They work in a myriad of situations when leveraged with the right body language and tone. Some examples:

• “Hmm, say more about that.”
• “Are you open to hearing another perspective?”
• “Can I have some additional context?”

These sentiments can create an opportunity for an impactful discussion. Tone and body language matter, so pair the inquiry with a curious tone and curious body language. This makes a difference in how the message lands. Imagine speaking to a child who had just shown you a book or toy you had never seen, so you turn your curious tone up, lean your head to the side, and raise your eyebrows as you say, “Where did you get this book?” or “Who gave you this new toy?” This is a strong way to get a message across in a way that starts a dialogue instead of provoking a difficult conversation that might make a person feel defensive.

You don’t have to adopt someone’s ideology to get to know them or become a thing to make room for it to exist. Inclusion is not asking for understanding or belief. It is asking for a willingness to be exposed to difference and grant it the same safety you want for yourself.

You don’t have to be a lesbian to have lesbian friends. You don’t have to be of Caribbean descent to enjoy Caribbean food and learn about Caribbean beliefs. I myself am a Black, heterosexual woman and some of my most powerful allies have been men, some much older or of a different race or ethnicity. I use traditional she/her pronouns. I do not have to switch my pronouns to he/him or they/them in order to respect that someone else uses those.

“[Inclusion] is asking for a willingness to be exposed to difference and grant it the same safety you want for yourself.”

Being inclusive is about being yourself while making space for differences in the identities of others, even if you do not understand them. It is displaying a willingness to be open to ideas or ways of being that you may not have ever thought to consider. Just as you know who you are and how you feel and identify, inclusion asks that there is respect for who other folks say they are, how they feel, and how they identify.

4. Speaking up teaches people how to treat you.

Folks can’t change their perspectives or behavior if no one tells them they are doing something wrong or unhelpful. A person can’t be held accountable for treating you poorly if you do not speak up. Not speaking up affects more than just your own experience. Using your voice isn’t just about speaking up for yourself, but also for others who are a part of the future. It teaches people to make space for others in the way that they make space for you.

Some situations make it hard to speak up. Being the only one in a situation can make self-assertion intimidating, as it is easier to blend in and be seen as a team player. Being an underrepresented identity in a room can encourage silence, so consider the experience of folks who are underrepresented all the time in everyday life.

For minority folks, shrinking and not speaking up can become a part of survival because they do not want to call attention to themselves as different. This feeling can be exacerbated when some aspect of their identity is subject to stereotypes. It is going to feel hard, but when you are the only one, in some ways it is even more important to speak up. Otherwise, your unique perspective (and those of countless other voices) might go unnoticed, and instead, you could suffer the wear and grind of unfair treatment over time, setting a precedent for others to face the same. Speaking up allows for others to course correct their behavior, and gives you a say in what that course correction looks like.

5. Always center your own well-being.

No one will look out for you like you because you live in your own head and know what you need best. You can only be your best when you have what you need. This doesn’t mean being selfish, but it does mean not allowing yourself to be taken advantage of or taking action when you are too upset to make wise decisions. Here are examples of how to push back when centering your well-being is at risk:

• If you feel your time is being taken advantage of, say, “Pardon me if I misled you about my flexibility, but this opportunity sounds like more than I’m able to support. What I’m able to do is . . .” Then proceed to reset the person’s expectations.
• If you are upset and need to speak up, wait until you are not too angry to talk. Walk. Find a relaxing activity. Chat with a friend or a therapist. If someone is trying to press a conversation with you when you are angry, say, “I can appreciate that you want to talk about this, but I need to get my emotions together first.”

These are just a few of the many scripts, tactics, and ideas that can navigate situations where your voice matters.

To listen to the audio version read by author Amber Cabral, download the Next Big Idea App today: