See, Solve, Scale: How Anyone Can Turn an Unsolved Problem into a Breakthrough Success 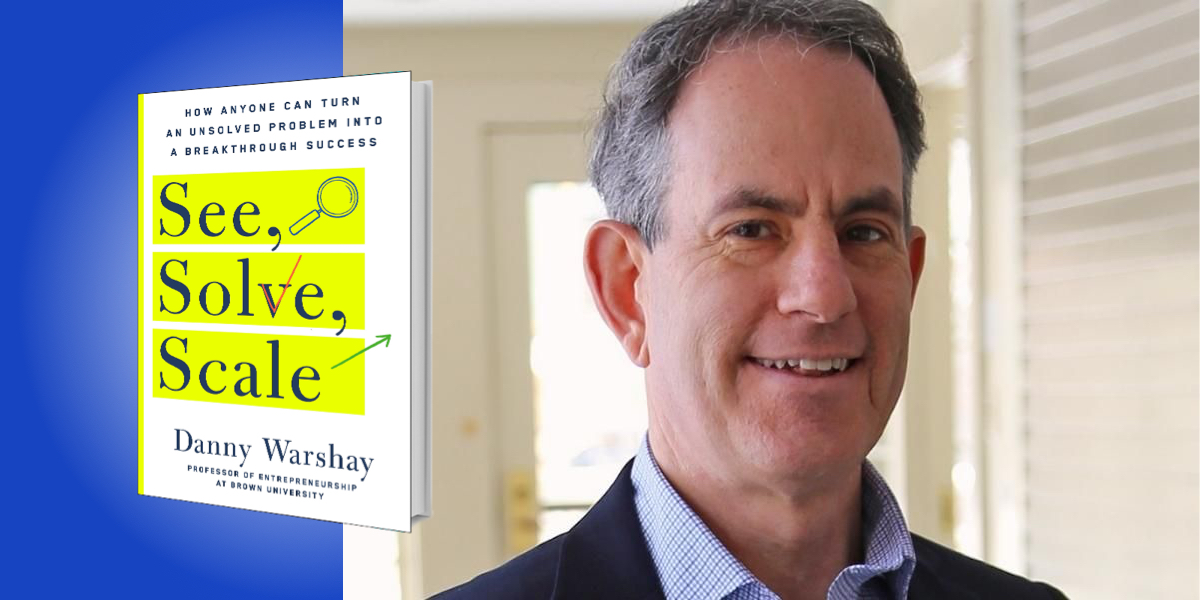 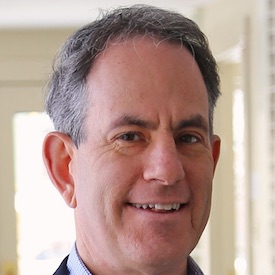 Danny Warshay is a professor of entrepreneurship, having taught thousands of people over the past 15 years. He is the executive director of the Nelson Center for Entrepreneurship at Brown University.

Below, Danny shares 5 key insights from his new book, See, Solve, Scale: How Anyone Can Turn an Unsolved Problem into a Breakthrough Success. Listen to the audio version—read by Danny himself—in the Next Big Idea App.

1. Entrepreneurship is a process that anyone can learn—not a spirit.

Have you ever heard the phrase “entrepreneurial spirit”? I hear it all the time, and I have no clue what it means. Imagine if we taught the engineers in charge of building our bridges to rely on a “bridge-building spirit.” That would be insane. In bridge building, there are fundamental principles that follow a step-by-step process that can be taught and learned. While each bridge is different—functionally, operationally, and aesthetically—there is a structured building process with a beginning, middle, and an end that you can master and apply.

Based on my own startup experiences, I suspected that the same was true in entrepreneurship. When asked to teach at Brown, I studied the relevant research and identified fundamental principles that all startup ventures follow. I developed a process that anyone can learn, master, and apply, while leaving room for variation. I define entrepreneurship expansively so that it appeals to every type of student.

I teach entrepreneurship as a structured process for solving problems, “without regard to the resources currently controlled,” which is another way of saying you shouldn’t let either scarcity or abundance get in your way. Over the course of an entire semester, I unpack that approach in ways that are easy to digest and empowers anyone to turn an unsolved problem into a breakthrough success—especially those whom mainstream entrepreneurship has ignored, neglected, or discriminated against.

If entrepreneurship is a structured process for solving problems, we’d better start with the problem. In the See step, you’ll use an anthropological approach to figure out what problem to solve. This prevents the expensive, and often fatal, mistake many entrepreneurs make of developing a solution in search of a problem. A former student, Dan Aziz, started his venture, Premama, in my Brown course. Using this anthropological Bottom-Up Research approach, he and his team spent time in the wellness aisle of Whole Foods, observing and listening. They discovered that pregnant women hate taking prenatal vitamins. So, they created a powdered formula that could be mixed in a liquid—and soon raised over $10 million in venture capital, while outselling many of the older, well-established vitamin companies.

In the Solve step, you’ll develop a Value Proposition—a small-scale solution to the problem—through an iterative process. This is a really fun step in that it incorporates surprising creativity and innovation techniques. You’ll learn to diverge before you converge, in the spirit of two-time Nobel Laureate Linus Pauling who said, “the best way to have a good idea is to have lots of ideas.” One of the most effective and surprising of these techniques is called Systematic Inventive Thinking (SIT) which offers five creativity templates that the research of SIT’s founders concluded are the most successful ways of solving problems. And another approach, called Nominal Group Technique, will help you to structure creativity sessions to make sure that you capitalize on the ideas of everyone in the group—especially introverts who are often left out.

“The best way to have a good idea is to have lots of ideas.”

In the Scale step, you’ll expand your solution to have big, long-term impact. Here is where you’ll learn something that many entrepreneurs have a hard time with: think big. The Landscape Exercise (adapted from a brilliant innovation mentor of mine, Bob Johnston) will help stretch your mind beyond near-term limitations to envision your problem many years into the future, and then invent backwards to make your long-term solution more expansive. My student Ben Chesler’s startup used these methods to build Imperfect Foods, a phenomenal example of a venture with enormous impact on the problem of food waste. 40 percent of all produce is thrown out because it looks different. Imperfect buys this “ugly produce” directly from farmers and ships it directly to consumers for 30 percent less than grocery store prices. It operates in over 43 states, employs over 1,500 people, has raised over $200 million in venture capital, has annual revenue of over $250 million, and—what Ben is most proud of—has saved over 150 million pounds of food waste.

3. The benefits of scarce resources and burdens of abundant resources.

Particularly in the early stages of this process, successful entrepreneurs benefit from having scarce resources. Scarce resources provide discipline to fail fast and fail cheap. Scarce resources motivate collaboration with people who bring complementary skills and experience. In exchange, they often require you to share the risks and rewards of your venture.

On the other hand, paradoxically, abundant resources can hinder you. They can force you to be too conservative. Because you are so focused on preserving them, they prevent you from seeing new opportunities, and you become too fixed on a particular outcome. Conversely, they can also make you overconfident. By removing the incentive to share risk, abundant resources can push you to make bets that you would not make if you had scarce resources. And without the incentive to share risk, you miss out on collaborations which could have added value to your venture.

Many entrepreneurial ventures never get started because their potential founders are paralyzed by their perceived lack of resources. So, I tell them the story of the Casper Mattress Company. In 2014, two of my former students zeroed in on problems with buying a mattress: you had to go to an uncomfortable showroom, put up with a frustrating delivery service, and commit to a product you would live with for years. So, Luke Sherwin and Neil Parikh set out to reinvent every step of the buying process. The challenge was that they knew next to nothing about mattresses. It turns out that their lack of experience helped them see what traditional mattress companies missed. Fast forward, and Casper Mattress Company has indeed reinvented the way we buy mattresses. At the time I wrote the book, it was doing $400 million in annual revenue as a public company.

“Freedom is found in the context of limitation.”

Jayna Zweiman is another wonderful example of the benefits of scarce resources. Jayna would have liked to go to Washington to join the hundreds of thousands of others at the Women’s March in 2017, but she was recovering from an injury that made it difficult to travel. Undaunted, she and a partner conceived the idea of engaging people in knitting circles across the country to create a sea of pink hats at Women’s Marches everywhere. These came to be known as Pussyhats, which would make a bold and powerful visual statement of solidarity. Jayna acknowledges that her own health limitations inspired her to co-launch the Pussyhat Project.

As the monastic proverb says, “Freedom is found in the context of limitation.”

As humans, our judgment is influenced by things outside of our awareness, even when we think we are being rational and logical. At critical junctures throughout this process, I caution that sometimes relying exclusively on your intuition will be a mistake, as doing so will cause common errors in judgment.

Several of these errors relate to one of the most important factors influencing entrepreneurship success: the strength of your team. Team strength is so important that 65 percent of startups fail because of people tensions and team problems. A common adage among venture investors is “I’d rather invest in an ‘A’ team with a ‘B’ idea, than a ‘B’ team with an ‘A’ idea.” But what makes an A team? In short, diversity in every way possible.

Teams with members from different backgrounds contribute different skills, embrace different points of view, comprise different personality types, races, and genders, and draw on these differences, producing the kind of creative abrasion that leads to breakthrough solutions. Unfortunately, more than half of venture teams are formed with solely friends and family, despite research showing that those teams are less likely to succeed.

Another common error is to draw solely from your network of close contacts. You’re better off tapping “weak ties” rather than strong ones. Social networks like Facebook and LinkedIn recommend others who have the same likes, dislikes, and areas of expertise as we do.

“What makes an A team? In short, diversity in every way possible.”

The most effective teams have some team members who have worked together previously, as well as a sprinkling of new members who have less experience and have not worked with the other team members. In the 21st century, this ideal composition will increasingly include a balance of human, AI, and robotic resources.

Finally, benefiting from adding team members requires more than checking a diversity box. In fact, one of the most surprising common errors is that, even in diverse teams, many focus on what members share in common, rather than leveraging the full range of diverse expertise and insight available. And in those cases, diversity without inclusion can backfire.

It is critical that you focus your See, Solve, Scale efforts on a consequential problem for which you feel drive, passion, and purpose. Patrick Moynihan, for example, used the Landscape Exercise to scale and expand the one Catholic school in Haiti he had started building into an entire a network of such schools. Micah Hendler figured that if Israeli and Palestinian teens could sing together, they could live together, so he started the Israeli/ Palestinian Jerusalem Youth Chorus. Using See, Solve, Scale, he envisioned how to think bigger and scale his vision into Raise Your Voice Labs.

Emma Butler is an example of what we might call a reluctant entrepreneur. On the first day of class, she was so nervous that she was shaking; she could not imagine that a visual arts and French studies student belonged anywhere near an entrepreneurship course. After mastering this process, Emma is now the founder and CEO of Intimately—an adaptive clothing company for women with disabilities. She has raised over a million dollars of seed capital, won several international pitch competitions, developed a brand and a supply chain, and has been featured in Forbes, Glamour, and Entrepreneur.

The main thing that all successful entrepreneurs have in common is a Japanese word: ikigai. Ikigai is an approach to living a purposeful life that combines four essential elements: What you are good at (drive), what you love to do (passion), what the world needs (purpose) and what pays you for the value you add. For many, measuring their entrepreneurship opportunities against these four criteria helps guide them to focus on opportunities that they find fulfilling.

Stanford psychology professor Bill Damon puts it well when he says, “The biggest problem growing up today is not actually stress; it’s meaninglessness.”

To listen to the audio version read by author Danny Warshay, download the Next Big Idea App today: