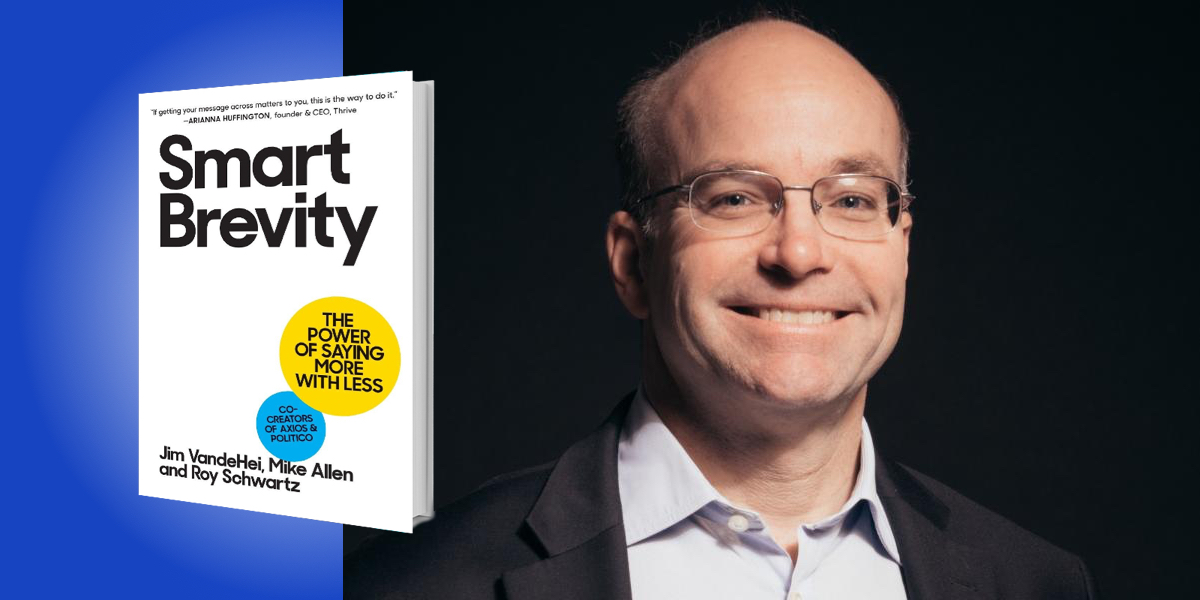 Jim VandeHei, Mike Allen, and Roy Schwartz are co-founders of Axios, which is a news website with the mission of making people smarter on the topics changing the world. Formerly, the three of them were founding journalists of Politico.

Below, Mike shares 5 key insights from their new book, Smart Brevity: The Power of Saying More with Less. Listen to the audio version—read by Mike—in the Next Big Idea App. 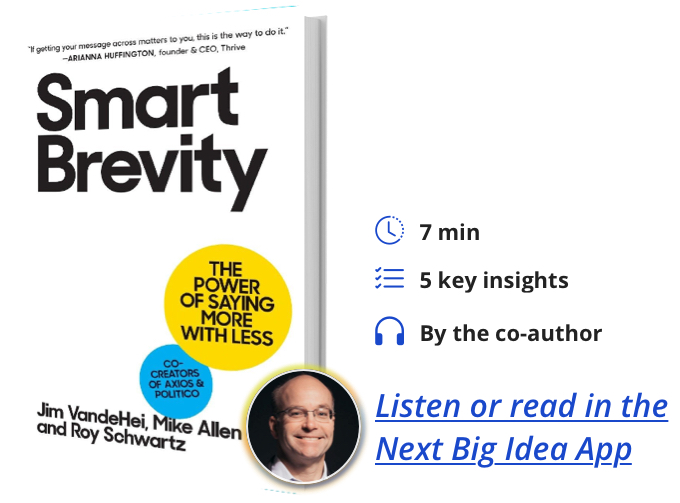 1. No one’s reading most of what you write.

I started in newspapers, where I was paid by the word. The more you wrote, the better chances of getting on the front page. Those who wrote even more had a shot at the Sunday front page. If you wrote even more than that, you might be nominated for a prize or win an award. But when we moved into the digital world and started Politico, we started to see data revealing that even our moms weren’t reading that. The Washington Post, which has some of the best journalism in the world, only had people viewing content for an average of 20 seconds per piece.

So, it makes sense that people will remember one thing you say, at best. This also applies to podcasts, Zoom sessions, or any industry meeting. Figure out what that one thing is that you want to get across and just say it. Put it up top.

If I’m having chips and salsa with you, there are social cues that keep me from being boring, right? I don’t use SAT words, or what my grandma called ten-dollar words. I don’t tell you things you already know. I don’t repeat myself because I want you to like me and I want you to have chips and salsa with me again. But when we sit behind a keyboard, we often do all those things that we refrain from in person. Journalists in particular tend to button up their collars.

“I don’t use SAT words, or what my grandma called ten-dollar words.”

One of the things we tell our journalists to do is read their passage out loud they can immediately catch if they’re using those fancy words, or the sentences are too long, or if there’s a word no human would use in real-time conversation.

The other day, one of our reporters wrote something that said, “Here, two-four in it.” I’m like, if you and I are having an Irish coffee, we are not going to say that.

3. Do the work for the audience.

Think about who you want to reach and don’t make them fish for your big ideas. In journalism, we were literally taught to hide our best stuff. We were told about the concept of putting “gold coins” in our writing, and if you had six good stats or anecdotes then those should be sprinkled throughout the narrative to keep people going. But people don’t have time for that anymore, and most people will not indulge that.

4. Spell out your takeaways.

I talked to a teacher in Falls Church, Virginia whose parents never seemed to pick up on what he was saying in his emails. They would write back and ask him things that he’d already answered. He read my morning newsletter, Axios AM, and he saw that I identified the key points and separated them with bold and bullets. He started doing that with his emails to parents and voila, he stopped getting stupid questions. The parents knew what he wanted them to focus on.

He took the time to think about what those three or four things were that he wanted them to know and spelled them out. It wasn’t just that he had isolated them with bold and bullets (which helps because every eye tracking study we looked at showed that when we see a block of text, people skip it) but he had taken the time to distill his message.

“He put in the thought on the front end.”

There was also a minister, David Glade, in Alexandria, Virginia. In a sermon, he boiled down the advice that he gave his kids to five words: Do the next right thing. It’s good advice, but the takeaway reveals the thought he put into that. Think of all the studies and commentaries that he could have added onto it. The succinct way he presented it made the message stick—the kind of thing that can be remembered years later. He put in the thought on the front end. Don’t let typing be the first thing you do.

When asking for a raise, we dig ourselves deeper than we should. If I was asking for a raise, I would say, “Here’s what I’ve done. Here’s what I’m going to do, and you should give me a raise.” Instead, most people preface with or tack on statements like, “Well, I know these are hard times. I know you have a lot on your desk.” Just say what you want and stop there—you’ll be better off.

The same thing applies to sales. I have watched sales people who have a good product approach a prospect and just keep talking. They raise so many issues that finally the prospect says, “Okay, I’ll think about it,” when if they would have stopped earlier, they would have secured an order.

To listen to the audio version read by co-author Mike Allen, download the Next Big Idea App today: