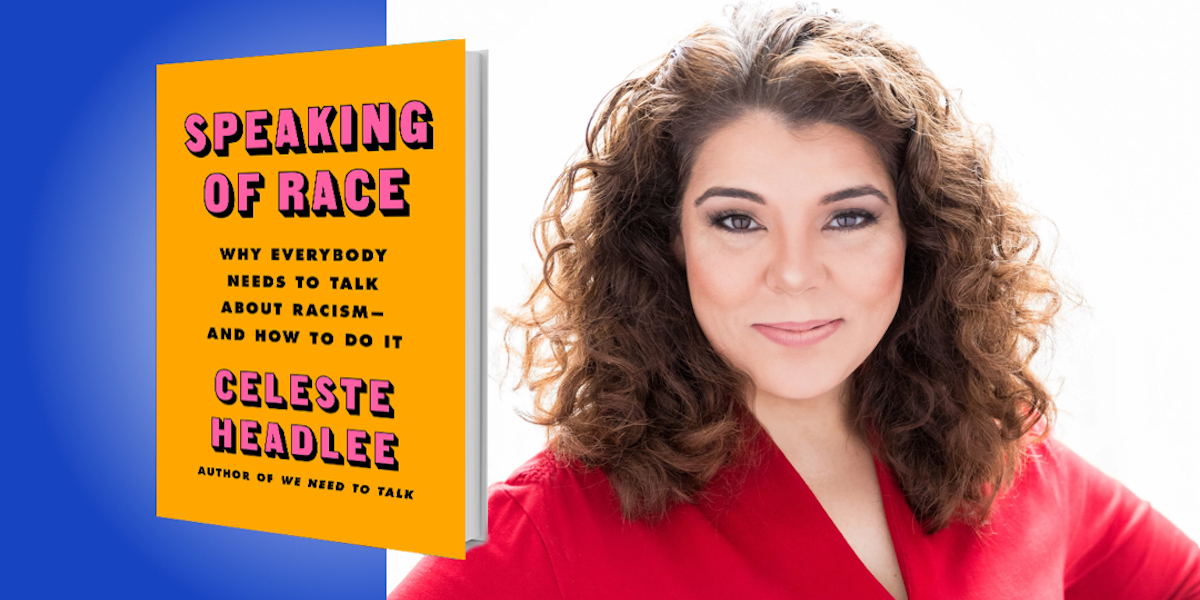 Celeste Headlee is a bestselling author with a 20-year career in public radio. Her award-winning work as a journalist has been featured by NPR, Time, and Elle, and she has presented to over 100 companies, including Google, Apple, and ESPN. Her specialty is insights on having better conversations. Her new book intends to make us more comfortable with one of the most intimidating of conversation topics: race.

Below, Celeste shares 5 key insights from Speaking of Race: Why Everybody Needs to Talk About Racism—and How to Do It. Listen to the audio version—read by Celeste herself—in the Next Big Idea App.

1. We have to talk about race more, not less.

One of the most common complaints from everyone—whatever their demographic—is that they would rather avoid a conversation about race. There’s a lot of reasons for why we avoid these conversations, and why they tend to make people defensive or angry. It mostly has to do with identity issues. Whenever you’re talking about identity, you’re talking about someone’s core values—what they think makes them, them. Race can be quite difficult to talk about if you’re challenging those things.

So why should we be talking about this more? The only way we’re going to move the needle on this is by learning from each other’s perspectives and experiences. And because the more you talk about it, the better you will get at talking about it, and the more likely it will be that future conversations will be productive and healthy, so you won’t have to dread them.

“Good conversation is a skill that can be learned, practiced, and improved.”

2. Nobody is an absolute expert in race.

One of the things we have to contend with in any discussion of race is that race doesn’t exist. Biologically speaking, there is no such thing as race. You can’t send in a blood sample and figure out if you had African Americans or any other race in your history. All we know, scientifically speaking, is a general area that your ancestors came from on the map, but race is a fiction. The only reason that race is real is because racism is real, and racism is experienced by individuals every single day, in minor ways, not-so-minor ways, and some life-threatening ways.

Our racial identities are particular to ourselves. I am Black and Jewish and white and a bunch of other stuff thrown in. So, if I were expected to be an expert on race, really the only race I could know the most about is my own. We have over seven billion people on this planet, and that means we have seven billion people who are an expert on their own racial identity. That’s actually a good thing, because it means that there’s always something for you to learn from that other person. They have something to tell you about their own experience: how they grew up seeing race, what they were taught, how their opinions differ—and don’t differ—from their parents and grandparents.

That means conversations should be relatively easy, because if race is particular to an individual, all you need to do is ask them to tell their story. And people are very willing to tell their story to others; we enjoy it quite a bit. In fact, there’s evidence that talking about yourself activates your dopamine center—the exact same neurotransmitter that’s activated by drugs and pulling the arm on a slot machine. So when you’re going into conversations about race, it doesn’t have to be from the perspective of, “I’m an expert, and I’m educating you.” It can be from the perspective of, “I’m an expert on my own experience, and you’re an expert on yours. Let’s share our stories.”

“The only reason that race is real is because racism is real, and racism is experienced by individuals every single day.”

3. Don’t take it personally, because we’re all biased.

Very often, these conversations are avoided because people are terrified of being called racist. It’s as though some believe the word “racist” is the worst thing that you can call another person. It has become so political and volatile that the word is almost devoid of meaning. No one will agree that they’re racist; even David Duke, former leader of the KKK, says he’s not racist. No one can really agree on which actions make someone racist and which don’t. There are even people who have yelled the N word at Black people and still say, “But I’m not a racist person.”

The word “racist” just doesn’t mean a lot, which also means that if someone says, “Hey, what you just said was racist,” that’s not the absolute worst thing they can say. What it comes down to is that we’re all biased, and you’re going to say things that are inappropriate. We are human beings. If science tells us anything, it’s that every single one of us is prone to biases based on people’s perceived race, gender, and sexual identity—as well as the kind of car they drive, the book that they’re reading, how clean their house is, and what kind of pet they own. Human beings are inherently biased in a huge number of ways, and we are constantly making assumptions about people.

Part of this is motivated by evolution. There was a time in which identifying someone as either a member of our tribe or not was a life-or-death situation. It used to be extremely important to make very quick decisions about someone that you were meeting for the first time. But usually, that’s not true anymore. The tendency to stereotype others has become outdated. What this all boils down to is that if we’re all biased, then it doesn’t mean that much to tell someone, “Oh, you’re biased,” because of course they are. But it also means that if someone points out that something you’ve done or said is biased, then one of the best ways you can respond to that is, “Uh-oh, I didn’t realize.” And apologize: “What did I say? Do you mind explaining to me which part of it was offensive so I can understand?”

“We are human beings. If science tells us anything, it’s that every single one of us is prone to biases based on people’s perceived race, gender, and sexual identity.”

4. What to do when you’re making a mistake.

If you walk by and somebody says to you, “Hey, you stepped on my toe. Ouch,” it would be very odd if your response was, “No I didn’t,” or “That didn’t hurt that much. You shouldn’t be upset about it.” Yet this is the mistake that we make all the time in issues of race and identity. Somebody says “That was racist,” and what they’re really saying is that you hurt their feelings. It’s an odd response to turn around and either say, “No, I didn’t upset you,” or “You shouldn’t be upset by that.” It’s not our place to tell people what they should be hurt by. Instead, if you step on somebody’s toe, you just say, “Oh, I’m sorry.”

You need to say, “I’m sorry that I hurt your feelings,” and then you can move forward. When someone says that you’ve said something racist or inappropriate, they’re giving you critical feedback. If you’ve ever had a performance review, you know that getting negative feedback is tough. It’s tough to give it, and it’s very tough to sit there while someone is criticizing you, and find the truth and value in it. But this is exactly what I’m asking of you when you make a mistake in talking about race.

It takes practice and discipline to see feedback from the perspective of, “This person is trying to make me better. What is true in what they are saying?” The reason some people stagnate is because they stop accepting critical feedback. Essentially, they start saying to the world, “I am allowed to say whatever I want, and the only response I will accept is one that says I’m right.” That’s not realistic. So when you’re talking about race and identity, there will be times when someone notices that something you said felt as though you were not including them or considering their feelings.

You have most likely experienced this from your own side a number of times. Maybe somebody used a word or a phrase that really rubbed you the wrong way. Maybe when people use the word “woke,” it upsets you. Maybe when people start talking about snowflakes or safe spaces, you don’t like that either. When someone says to you, “Hey, that phrase bothers me, please don’t use it,” then you just don’t use it anymore. That’s the civil and friendly thing to do. It doesn’t matter if you don’t like the person. You’re approaching them like a human being who deserves respect during your conversation—the exact same kind of respect that you expect from them.

5. Self-persuasion is how minds are changed.

Oftentimes when we go into these conversations, we intend to change someone’s mind, educate them, or explain why they are wrong and we are right. But this approach doesn’t work. I’m not telling you to stop trying to change people’s minds because there’s an ethical problem with it; I’m telling you not to do it because it does not work. We just don’t have a lot of evidence that people can be changed over the course of a conversation because of debates, tactics, statistics, facts, and the strength of your argument.

Which means that if someone’s mind is going be changed (and I truly believe minds can change) it’s going to happen over time. It’s going to happen incrementally. They will self-persuade after they have had a number of conversations that lead them to think differently—to see things from a different perspective. So that is not your burden; you don’t have to put that on yourself, to change their mind. And hopefully, that lightens your load a little bit.

To listen to the audio version read by author Celeste Headlee, download the Next Big Idea App today: