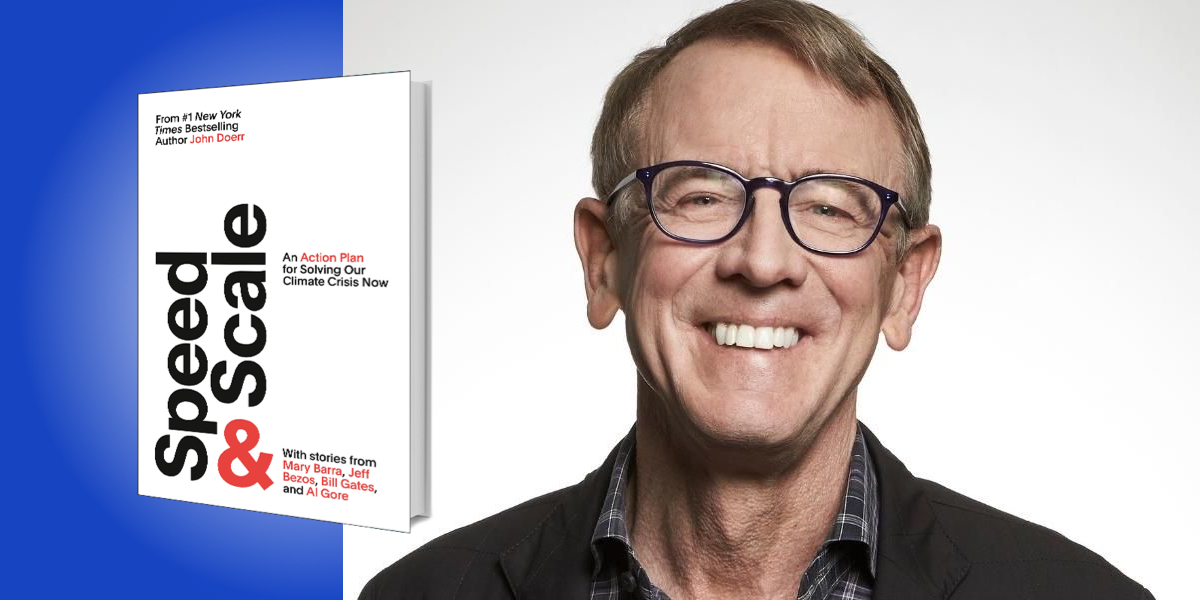 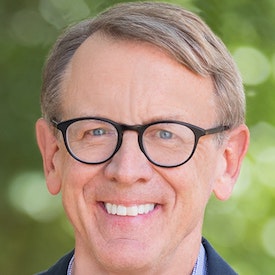 John Doerr is an engineer, venture capitalist, and climate activist. He is the chairman of venture capitalist firm Kleiner Perkins, where he has helped entrepreneurs build disruptive companies and bold teams for over 37 years. He was an original investor and board member at Google and Amazon, and serves on the board of the Obama Foundation.

Below, John shares 5 key insights from his new book, Speed & Scale: An Action Plan for Solving Our Climate Crisis Now. Listen to the audio version—read by John himself—in the Next Big Idea App.

1. Saving the planet won’t be easy, but it’s simpler than you might think.

Early in 1942, President Franklin D. Roosevelt shared with his commanding general a strategy to win World War II. FDR grabbed a pencil and a cocktail napkin and scrawled out a three-point action plan: hold four key territories, attack Japan, and defeat the Nazis in occupied France. It was a plan stripped to the bare bones, but it gave the U.S. military leadership something they desperately needed: focus and clarity.

Inspired by FDR, the Speed & Scale Plan is built around just six solutions. They define what the world must do by 2050 to contain global warming. We’ve got to get to net zero—the point where we’re emitting no more carbon than we can remove. We need to electrify transportation, decarbonize the grid, fix our food system, protect our forests and oceans, clean up high-emissions industries (especially steel and cement), and then remove any carbon that’s left over. That’s the whole enchilada, right there.

“We’ve got to get to net zero—the point where we’re emitting no more carbon than we can remove.”

Our plan also features four accelerants, the levers for achieving those six solutions: to win politics and policy, turn movements into action, innovate, and invest. All ten of these objectives come with a handful of “key results” that measure how we can achieve them. Even so, you could lay out the essence of our plan on a napkin.

2. To solve the climate crisis, we’ve got to go for the gigatons.

When someone asked Willie Sutton why he robbed banks, he replied, “Because that’s where the money is.” In the climate action business, we need to go where the emissions are. We need to address the very largest sources of the 59 billion tons of carbon that choke the Earth’s atmosphere every year.

How do we go for the gigatons? For starters, it means homing in on the top-emitting sectors—beginning with the electrical power grid, which accounts for more than 40 percent of the world’s total greenhouse gas emissions.

Internationally, it means focusing efforts in the 20 top-emitting countries, and in particular the top five, which account for two-thirds of the problem: China, the United States, the European Union, India, and Russia. At the moment, only the U.S. and EU are even theoretically on board with net zero by 2050.

On the business front, going for the gigatons means pressuring the 100 companies that account for 71 percent of the carbon emissions problem. Walmart and Amazon are two worthy corporate role models. Both have committed to net zero by 2040 (a full decade ahead of the Paris Agreement) and they’ve also committed to bringing their supply chains along with them. We need other companies to follow suit, and quickly.

“On the business front, going for the gigatons means pressuring the 100 companies that account for 71 percent of the carbon emissions problem.”

For any one organization, going for the gigatons means taking a hard look at where they can get the biggest bang for their buck in emissions cuts. Recycling drives at the office cafeteria are not going to cut it. Here are three stronger bets:

3. We must turn the green premium into a green discount.

The green premium (a term I first heard from Bill Gates) is the additional cost of a clean product versus one that spews more carbon. One of the highest hurdles between the world and net zero is that most people either won’t pay for or can’t afford the cleaner alternative, whether it’s plant-based burgers or renewable power.

For EVs (electric vehicles) to swing the auto market, they’ll need to offer better performance at comparable prices. They’re getting close, but they’re not quite there yet; the last time I checked, a Chevy Bolt cost about 12 percent more in per-mile ownership than a Chevy Malibu.

But here’s the good news: as clean technologies scale, prices come down. The premium shrinks.

“Solar and wind—along with hydroelectric, geothermal, and biomass—now power well over half of the nation’s grid.”

About 15 years ago in Germany, skyrocketing demand for solar energy set off a manufacturing boom. A federal clean power subsidy for producers and installers helped it along. Then Chinese manufacturers saw an opportunity and moved to seize it. In the price war that followed, the price of solar panels plunged by 90 percent, from two dollars per watt of output to twenty cents. Fossil fuel plants found themselves hopelessly undercut. By the summer of 2020, Germany attained the first renewable “power majority” in a leading industrial country. Solar and wind—along with hydroelectric, geothermal, and biomass—now power well over half of the nation’s grid. And so, over the last 20 years, Germany has reduced its grid emissions by nearly half.

4. In order of impact, we need to cut emissions, conserve energy, and remove carbon—simultaneously.

If we’re going to limit global warming to one and a half degrees Celsius and avoid a runaway climate disaster, we’ll need to pursue three strategies at the same time. The most powerful thing we can do is to avoid greenhouse gas emissions in the first place—by halting deforestation, say, or limiting the consumption of beef and dairy, or stopping methane leaks from coal or gas sites.

The second most important thing that countries or companies can do is to increase their energy efficiency. The more output per energy input, the less demand there will be for fossil fuels.

Finally, after we’ve cut and conserved as best as we can, our third task is to clean up the stubborn carbon that remains. We still need to engineer the removal of five billion tons of heat-trapping gases per year. That’s the most colossal challenge of all. While direct air capture technology is promising, it has so far sequestered just a few thousand tons of carbon worldwide. For five gigatons, we’d need an expanse of solar panels as large as the state of Florida. At the going rate, it would cost $3 trillion a year.

“How much more devastation must we endure before we realize that it’s cheaper to save the planet than to ruin it?”

In short, we need a land rush of innovation to make this process affordable at scale.

5. Solving the climate crisis is the greatest opportunity of the 21st century—for the economy, for our health, and for the future of humanity.

Left unchecked, global warming is projected to create 1.2 billion climate refugees by 2050. Even now, the costs to humanity are staggering. Climate change is destroying whole economies. In 2021 alone, flooding cost $27 billion in China and $30 billion in Europe. Hurricane Ida cost up to $95 billion. How much more devastation must we endure before we realize that it’s cheaper to save the planet than to ruin it?

Here’s what we and others are discovering: the clean energy revolution is the greatest opportunity of this century. There is enormous untapped potential in going green. This monumental transition will generate a net gain of 25 million jobs this decade.

In the 1990s, as Kleiner Perkins invested early in Google and Amazon, I set off a small firestorm by arguing that the internet was underhyped. I now feel the same way about the transition to clean energy. It’s being underhyped–or at least, its potential is being underestimated and underappreciated. As Laurene Powell Jobs told me, “The climate crisis should be looked at as one of the greatest opportunities ever presented to humankind.”

To listen to the audio version read by author John Doerr, download the Next Big Idea App today: