Why Da Vinci Would Want a Selfie Stick 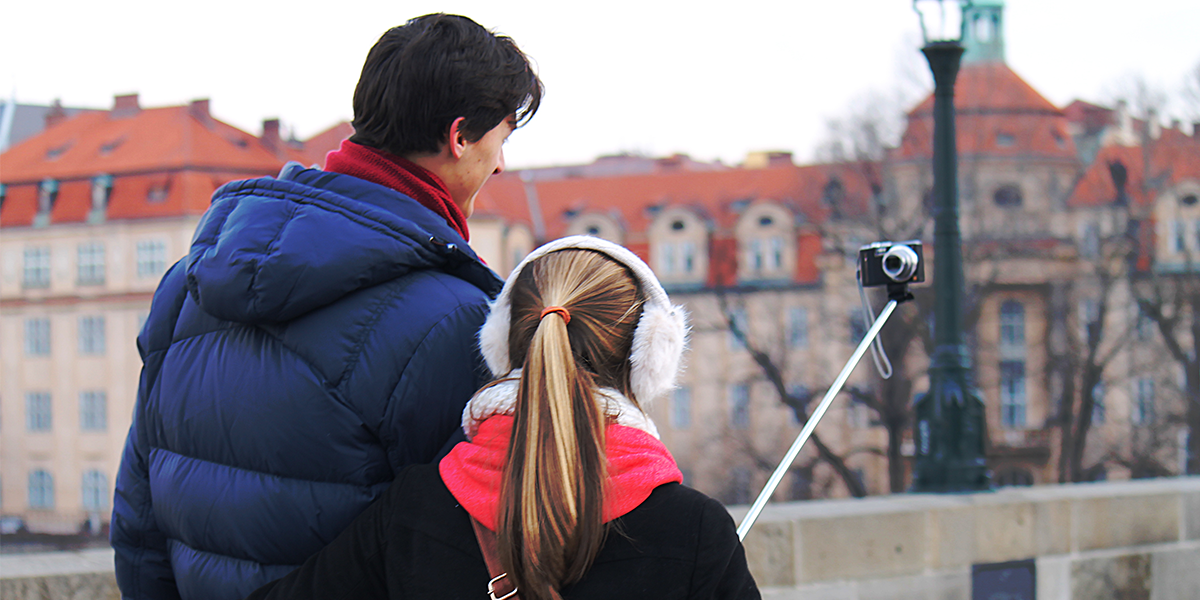 The selfie stick trend is as ridiculed as it is irresistible. My roommate rolled his eyes when his sister gave him one two years ago, I rolled my eyes when my dad gave me one last Christmas, and my three best friends rolled their eyes when I gave each of them one, in three different glittery colors and with a flashlight on the bottom, last week. Despite the vitriol leveled at selfies — they’ve been called relationship-ruiners, narcissistic, “harbingers of cultural decay,” and simply “the worst” — are we, the people of the early 2000’s, really so unusual (or terrible) for wanting to take some pictures of our glorious mugs?

As science writer Steven Johnson points out in How We Got to Now, the tradition of selfie-taking dates back to the dawn of self-portraiture. In the Early Renaissance, the invention of mirrors enabled artists to see clear images of themselves for the first time. (In case you’re a little rusty on your art history, that’s over 000 years ago.) The lauded self-portraits of Da Vinci, Dürer, and Rembrandt, among others, arose from the desire for a two-dimensional reproduction of their faces, so that others could gaze upon them for all eternity. And no one would argue that the artists lived in times of “cultural decay.”

Of course, the OED defines a selfie as “a photograph that one has taken of oneself, typically one taken with a smartphone or webcam and uploaded to a social media website.” If we adhere strictly to this definition, we can’t say Leonardo and his friends were taking “selfies” exactly – even if what they were doing was essentially the same thing.

So, ignoring everything after “typically,” let’s look at the first dictionary-approved selfie of all time. It was taken in October or November of 1839, by the Philadelphia-born Robert Cornelius, who used the daguerreotype process. In January of 1839, the daguerreotype process – the earliest photography process – had been made public in France. Which means that once the technology was available to take a selfie, it took only a few months for someone to do it.

If you think Cornelius was the only one with the idea, think again. From there, a small constellation of selfies would follow: the photographer Joseph Byron in 1909, the Grand Duchess Anastasia of Russia in 1914, the forward-looking Stanley Kubrick in 1949, and even Buzz Aldrin, floating in space on the Gemini 12 mission in 1966, snapped a selfie.

And as cameras became more ubiquitous, selfies did too. In 1975, Steven Sasson, working for Kodak, invented digital photography; three years later he got the patent for the “electronic still camera.” This meant that photography was cheaper and easier. As a consequence, more people bought cameras than ever before.

It was the invention of the front-facing camera, however, that would soon take selfies to a new level. In 2003, the Sony Ericsson Z1010 was the first cell phone to feature a front-facing camera. By 2010, once Apple incorporated the technology into the iPhone 4, the ability to take a selfie on your phone became widespread. It made snapping your social media profile picture quick and easy.

Which brings us to perhaps the most vital, yet often overlooked advent in the rise of selfies: MySpace. Launched in 2004, within two years it became the most-visited site in the world. MySpace not only proved the widespread existence of selfies — by providing an easy way for users to make their private photos public — it was instrumental in popularizing selfies.

Think about it as a market. Before MySpace, demand consisted almost exclusively of people’s natural desire to replicate their own image. Then the website added the demand of friends and followers. (As soon as you made your profile, your instant friend, Tom, requested a picture of you.) With the introduction of an easily accessible audience, production skyrocketed.

Vanity helped ignite this explosion, too. You probably weren’t too keen on letting the picture that summarized you for the world be the one taken with your grandma for her birthday last weekend. And since you were alone, and riding on the excitement of setting up your profile, you switched on your webcam — or else grabbed a digital camera and flipped it around — made a duck face, and clicked the button.

Soon Facebook came along, with ever-multiplying social sites to follow, and the rest, as they say, is history.

It was voted Word of the Year.