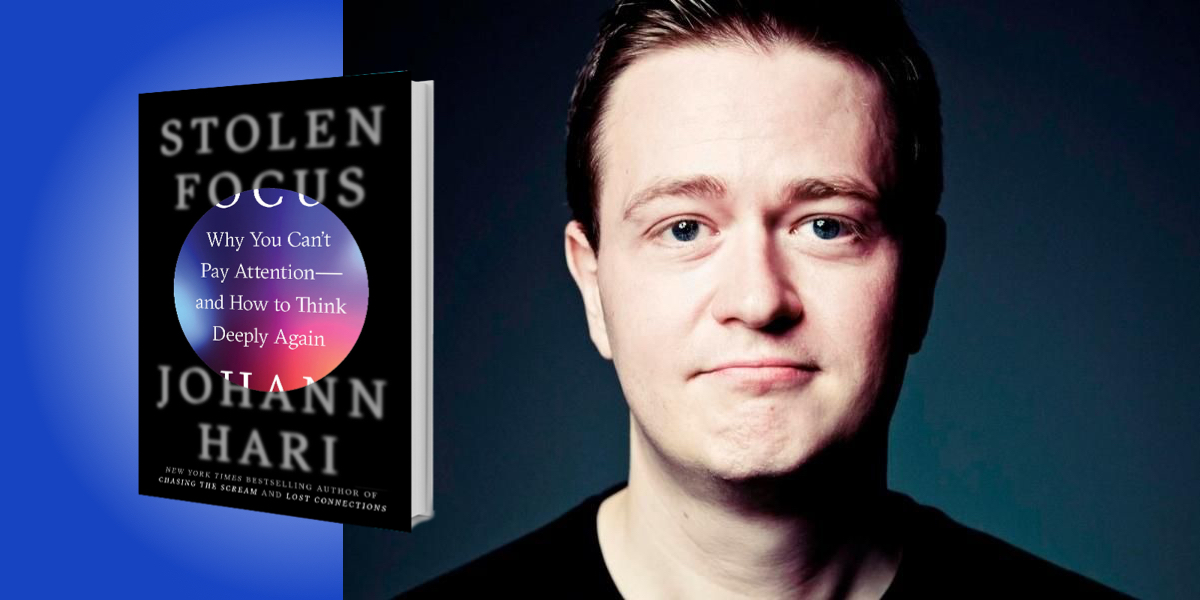 Johann Hari is a writer and journalist. He has written for the New York Times, Le Monde, The Guardian, and other newspapers. His TED Talks have been viewed over 70 million times, and his work has been praised by a broad range of people, from Oprah Winfrey to Noam Chomsky to Joe Rogan.

Below, Johann shares 5 key insights from his new book, Stolen Focus: Why You Can’t Pay Attention—and How to Think Deeply Again. Listen to the audio version—read by Johann himself—in the Next Big Idea App.

1. Your attention didn’t collapse—it was stolen.

We are now living in a serious crisis of attention—one that is analogous to the obesity crisis, or the climate crisis. The average college student now spends just 65 seconds on each task. The average office worker spends just three minutes. Even the average Fortune 500 CEO only gets 28 minutes of uninterrupted focus a day.

Most of us are responding to this crisis by blaming ourselves. When I felt my own attention fraying, I’d say, “You’re weak, you’re lazy, your willpower isn’t strong enough.” But then I spent three years traveling all over the world, interviewing over 200 leading experts on this subject. I learned from them that this is, in fact, a systemic crisis—one that is happening to all of us—and it requires systemic solutions. Professor Joel Nigg, one of the leading experts on children’s attention problems, told me that we need to ask if we are living in an “attentional pathogenic environment,” one in which tasks that require deep focus—like reading a book—are becoming more and more like running up a down escalator. Professor Barbara Demeneix, a French scientist, told me, “There is no way we can have a normal brain today.”

I learned that there is scientific evidence for 12 factors that can degrade our attention—and many of those factors have been rising dramatically in the past few years. In other words, your attention didn’t collapse; it was stolen by these big and powerful forces. You haven’t become weak. You’ve been hacked. Interestingly, tech—which is normally the first cause we think of—is playing a significant role, but it isn’t the biggest of the causes. To get out of this crisis—to get our brains back—we need to first understand these 12 causes, and then deal with them one by one.

“Your attention didn’t collapse; it was stolen by these big and powerful forces. You haven’t become weak. You’ve been hacked.”

2. If your screen time shows that you spend three hours a day on your phone, you are losing far more than that in stolen focus.

Professor Earl Miller, one of the leading neuroscientists at the Massachusetts Institute of Technology (MIT), told me bluntly: “Your brain can only produce one or two thoughts” in your conscious mind at once. That’s it. “We’re very, very single-minded.” Yet the average young person now believes they can follow six or seven forms of media at the same time. When neuroscientists studied this, they found that when people believe they are doing several things at once, they are actually—as Miller explained—“juggling. They’re switching back and forth. They don’t notice the switching because their brain sort of papers it over, to give a seamless experience of consciousness. But what they’re actually doing is switching and reconfiguring their brain moment-to-moment, task-to-task—[and] that comes with a cost.”

He explained that “your performance drops, you’re slower—all as a result of the switching.” It feels like a small effect, but it degrades your attention and thinking by a startling amount. One study at Carnegie Mellon University’s Human Computer Interaction Lab took 136 students and got them to take a test. Some of them had to have their phones switched off, and others had their phones on and received intermittent text messages. The students who received messages performed, on average, 20 percent worse. Other studies in similar scenarios have found even worse outcomes of 30 percent.

But it gets worse still. Professor Michael Posner at the University of Oregon found that if you are interrupted, it takes you an average of 23 minutes to get back to the same level of focus you had before you were disturbed. So if your screen time shows that you spend three hours a day on your phone, you are losing much more. Yet we are surrounded by apps like Facebook that are designed to interrupt you and get you to pick up your device and start scrolling.

“If you are interrupted, it takes you an average of 23 minutes to get back to the same level of focus you had before you were disturbed.”

3. The COVID crisis has flipped many of us into a state called “hypervigilance,” which is ruining our focus.

At the start of the COVID crisis, many of us thought that with more free time, we would read more. Lots of people cracked open their neglected copies of War and Peace—yet in reality, we struggled to focus more than ever. Why? Dr. Nadine Harris, the Surgeon General of California, was the first to tell me about the psychological phenomenon that helps to explain this.

Imagine that, one day, you are attacked by a bear, and you survive. In the weeks and months that follow, your attention will shift, involuntarily. It will move from focusing on the things in front of you—say, your emails, or what you’re going to cook tonight—to scanning for dangers all around you. You will find it harder to focus on more everyday concerns because you are primed to spot unexpected threats. Now imagine that, just as you start to feel safe, you are attacked by a bear again. You will then flip into a state called “hypervigilance,” where you are constantly scanning for risks, and find it impossible to focus on reading Tolstoy.

But this phenomenon isn’t limited to bear attacks; any stressful situation will trigger greater vigilance. This is why stress—at work or at home—so often causes a huge increase in attention problems. As Dr. Jon Jureidini, a leading child psychiatrist in Adelaide, Australia, told me, narrowing your focus is “a really good strategy in a safe environment, because it means you can learn things and flourish and develop. But if you are in a dangerous environment, selective attention [where you focus on just one thing] is a really dumb strategy. What you need instead is to evenly spread vigilance around your environment, looking for cues for danger.” In short, deep focus is something you can only really do when you have achieved safety. So nobody should blame themselves for struggling to focus during a pandemic.

“Deep focus is something you can only really do when you have achieved safety. So nobody should blame themselves for struggling to focus during a pandemic.”

4. The way we eat in the Western world is severely damaging our attention and focus.

A new field of science has emerged in the past few years called “nutritional psychiatry”—the study of how what we eat affects how our brain works. By interviewing some of the leading figures in this field, I learned that the unprecedented shift in the Western world toward eating mostly processed foods has seriously affected our ability to focus, in three ways. The first, as one of Britain’s leading nutritionists, Dr. Dale Pinnock, explained to me, is that our diet causes huge energy spikes, and then energy crashes—which leave us with brain fog. Imagine, for instance, that you eat white bread or Frosties for breakfast; that releases glucose really fast, giving you a rush of energy. But then your blood sugar crashes, and you slump at your desk, feeling drained and unable to think clearly. It is, Pinnock said, “like putting rocket fuel into a Mini. It would just burn out and bust very quickly—because it can’t handle that. But put in the petrol it’s designed to take, and it’ll go along nicely.”

Secondly, our current diet deprives us of key nutrients that are necessary for our brains to fully develop and grow. A Dutch study assigned children to a diet where they had to cut out most of the synthetic, processed foods we normally eat. 70 percent of them experienced an increase in attention—and the average improvement was of 50 percent. Thirdly, our current diet contains dyes and chemicals that act on our brains like drugs, amping us up. A study in Southampton in Britain took a group of kids and divided them in two. One was given a plain drink, and the other was given a cocktail of dyes and other chemicals that are found in the candies kids eat every day. The kids given the cocktail were significantly more likely to become wild. We already knew the Western diet was making us obese, but it is also ruining our focus.

“The unprecedented shift in the Western world toward eating mostly processed foods has seriously affected our ability to focus.”

5. We can only get out of this crisis if we respond at two different levels.

There are two levels at which we need to respond to this crisis. The first is as isolated individuals, by making changes in our own lives and our children’s lives, to protect ourselves from the 12 forces invading our attention. I learned many different techniques, which I go through in the book. To name just one that really helped me: I bought a K-Safe, a small plastic safe that will lock away your smartphone for however long you tell it to. So now I imprison my phone and get four hours of undisturbed time every day.

Individual changes will help, but they will only get us so far. At the moment, it is as though we are all being covered with itching powder, and the person pouring the itching powder on us is saying, “You know, you might want to learn to meditate. Then you wouldn’t scratch so much.” Meditation does have value, but we need to band together and collectively take on the forces pouring this powder on us, and stop them. Just as women needed (and need) a feminist movement to gain control of their bodies and their lives, I believe we now need an attention movement to reclaim our brains. We can tackle the deep causes of this crisis. To name just one: as long as social media companies profit from interrupting and distracting us, they will find ever-more sophisticated techniques to do it. We need to force them to adopt a different business model.

There’s a precedent, as the technologist Jaron Lanier has pointed out. In the 1970s, we learned that the lead that was found in our paint and our gasoline was damaging our children’s brains. So, we banned the lead. We still paint our homes and drive our cars—but without lead. We now need to do the same with the factors that are ruining our attention today. This requires a shift in perspective. We need to stop asking for tiny tweaks—we are not medieval peasants, begging at the court of King Zuckerberg for crumbs of attention from his table. We are the free citizens of democracies, and we own our own minds—and we can take them back from the forces that have stolen them.

To listen to the audio version read by author Johann Hari, download the Next Big Idea App today: