Taxi from Another Planet: Conversations with Drivers about Life in the Universe 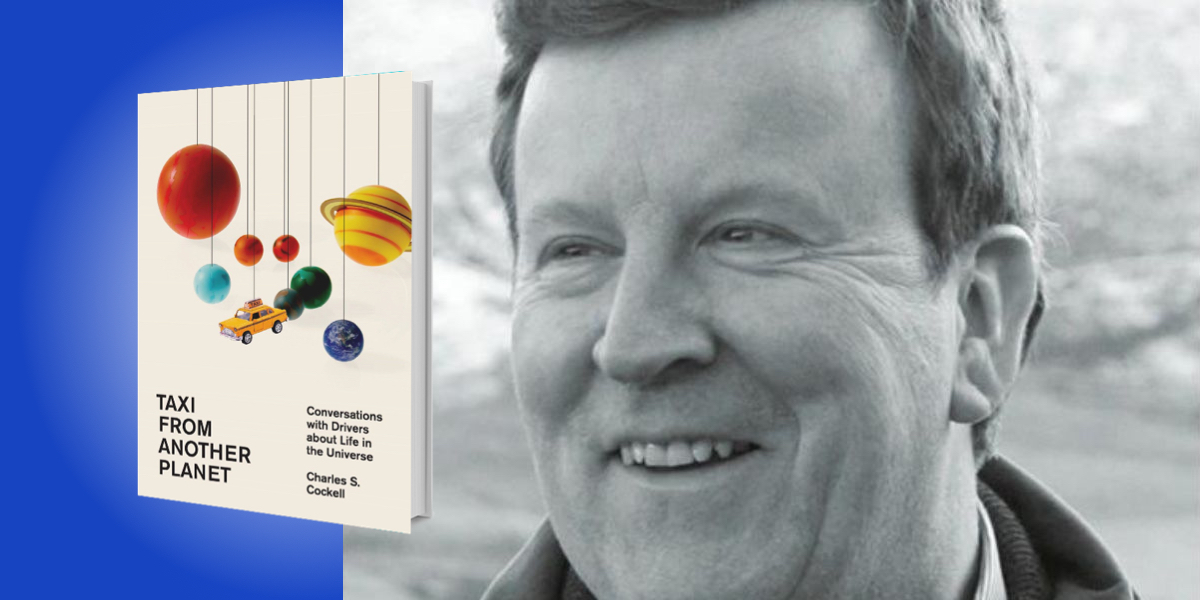 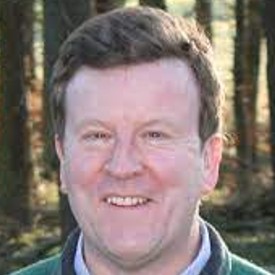 Charles Cockell is Professor of Astrobiology at the University of Edinburgh.

Below, Charles shares 5 key insights from his new book, Taxi from Another Planet: Conversations with Drivers about Life in the Universe. Listen to the audio version—read by Charles himself—in the Next Big Idea App. 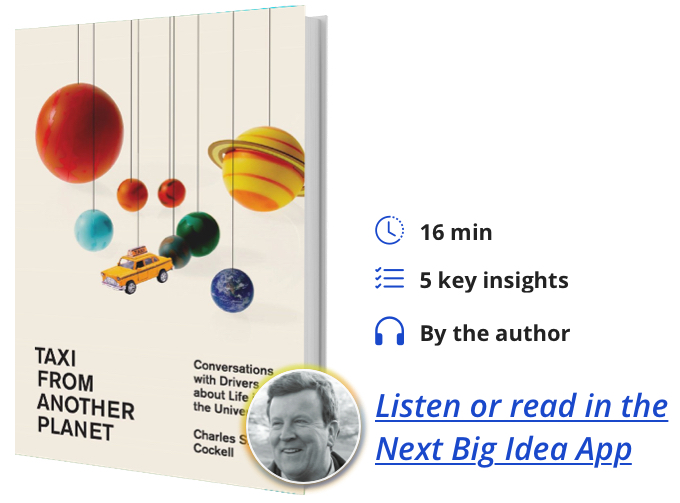 1. Taxi drivers have incredible insights into our significance in the universe.

A few years ago, I was in a taxi in London. After telling the driver that I am an astrobiologist, he turned around and asked me, “Are there alien taxi drivers on other planets?” That may sound crazy, but it’s really quite profound because to get a taxi driver on any planet, first you need life to emerge from the super chemical compounds.

A tiny little microbe has to appear on that planet. That microbe must evolve into complex life, and that complex life has to develop intelligence. Once it has intelligence, it has to come up with the idea of accepting payment to take a passenger from point A to point B. In other words, they have to invent economics. To have an alien taxi driver, all of those steps are required, from the origin of life through to the emergence of complex civilizations. This was a very profound question. Taxi drivers are connected to the hive mind of humanity. They talk to people every day from all walks of life. Hence, they have amazing insight into important questions regarding life in the universe.

2. The universe is much more than aliens.

There is a lot more to discuss about life in the universe than the possibility of extraterrestrials. Whether we will eventually talk to aliens is interesting, but the subject is much wider than that. For example, should we really be solving Earth’s problems like our environmental issues, before exploring space? Thinking about our place and life in the universe entails what we do with ourselves here on this planet and whether we should explore space at all. Buried in that are questions like, Will I go on a trip to Mars? Will I be able to go into space? This is about the extension of human life into the universe.

But even when we talk about aliens, there are fascinating and diverse questions. Such as, if we did make contact with an extraterrestrial intelligence, would it completely change our behavior? We know that several centuries ago people assumed that there were living creatures on the moon and civilizations on Mars. Astronomer Percival Lowell famously wrote whole books about the canals built by Martians trying to save their desiccated cities.

“In the past, thoughts about alien life don’t seem to have modified attitudes among humans all that much.”

Yet, as far as we know, those speculations never changed human civilization. People didn’t have fewer wars because Percival Lowell thought that there were Martians. In the past, thoughts about alien life don’t seem to have modified attitudes among humans all that much. But what would happen if we did make contact? Or, what would happen if there were no aliens at all? Most would rather assume that there are intelligent civilizations out there that we will eventually contact. But it could be that there are no other intelligences in the universe, or if they are out there, they’re so far away that we are essentially alone.

We might also think about the meaning of life. What is the significance of existing in the universe as a lone consciousness on a planet? Are we exceptional? I spoke about these matters with taxi drivers. We can see that life in the universe is really about us. It’s about aliens. It’s about our future. It’s about the potential of our civilization on this special planet Earth and our potential to go beyond this planet to settle places far beyond.

3. Could it be that there are no alien civilizations?

Many of us are so used to movies like Star Wars and episodes of Star Trek, that we’re absolutely convinced that one day we will visit strange new worlds. Yet, it is possible that there are no civilizations out there, or none we can hope to contact. Physicist Enrico Fermi famously asked, If there are civilizations older than us, why haven’t they visited us? Over the last 100 years, we’ve gone from horse and cart to spaceship. Imagine a civilization living on a planet that’s a million years older than us. Surely, they would have developed interstellar or intergalactic travel, and they would regularly land in the middle of places like Edinburgh, chat with people, taste Scottish haggis, get back in their spaceship and travel home. Why don’t we see the aliens?

There are a number of solutions to Fermi’s so-called paradox. One simple solution could be that the nearest civilization is so far away that it’s impossible for them to reach us. If the speed of light is an ultimate limit in physics (which we currently think it is), then maybe interstellar distances are too great for aliens to traverse. That’s a rather depressing thought, but it has profound implications because it suggests that we Earthlings are special. We should take care of ourselves a little bit more because it could be that this planet is a rare outpost of sentience in a senseless universe. Universe lacking aliens may not be as exciting as the Star Trek future that we originally envisaged, but it could mean a great deal for our significance in the universe, and the unusualness of intelligence.

“We should take care of ourselves a little bit more because it could be that this planet is a rare outpost of sentience in a senseless universe.”

Of course, a lack of intelligence in the universe does not mean that there aren’t planets with simple microbial life. That would be profoundly interesting because it would reveal that the origin of life is common in the universe, but the evolution of advanced societies is extremely rare. We might also find a universe full of lifeless planets, where not even humble microbes exist, and that would suggest that the origin of life itself is extremely unusual.

Whether we find life or not, it doesn’t matter. We’re going to learn an enormous amount about ourselves even if we don’t find intelligent civilizations in the greater universe.

4. We should solve Earth’s problems before going into space.

We have challenges on this planet that should take priority over hunting for aliens on other planets. When we look around at the problems with our climate, pollution, and habitat destruction, it’s quite reasonable for people to think, let’s get our house in order before spending all this energy on getting into space. But what if going into space helps us look after Earth?

For example, if you want to live on the moon or Mars, you need to worry about recycling. When you look into the night sky, space seems to be a limitless, infinite environment. It’s a vast realm compared to Earth. But when you live on the moon, it’s difficult to get water. You can dig up ice at the bottom of some crater, but that’s a difficult operation. Eventually, you need to recycle your water. Space might look limitless, but to live on the moon and Mars we need efficient recycling technologies—technologies that can be used on Earth to reduce our environmental footprint. Living in space can drive technologies to help us live on Earth.

Another interesting aspect of going into space is what we learn about Earth. A bit like going to a foreign country, you might eat different food or learn a different way of being polite to others. All sorts of different things surround you which offer new perspectives on your home country. In returning home, you may have a completely different outlook on your own country. So too, when we go to other planets, we go on an astronomical holiday. For example, if we go to Mars, we learn about the history of water on that planet. In turn, we learn about deserts on the earth and how life can sustain itself in the most extreme conditions on our planet. In fact, many people travel to places like Antarctica and deserts like the Atacama Desert to learn about Mars. In other words, the earth is part of space. It’s not an isolated planet disconnected from the rest of the universe. Inevitably, as we move out into space, we learn about our own planet’s history.

“Living in space can drive technologies to help us live on Earth.”

Let’s not think about going into space or looking after Earth. Let’s think about environmentalism and space exploration as utterly connected. By going into space, we look after the Earth and by looking after the Earth, we can better learn how to make the best use of space. Environmentalism and space exploration are connected to one and the same objective to live sustainably in the cosmos.

5. We live in very exciting times.

It may seem like we have many daunting problems, such as solving the climate crisis. But this is also an astonishing opportunity. In the next few decades, we get to figure out how to live sustainably on our special blue orb. We also have the technology to establish ourselves permanently in other places in the cosmos. For the first time in the four-and-a-half billion-year history of Earth, one species is capable of establishing itself in the far reaches of the universe.

All of that can happen, but above and beyond all that, we will address a profound question in these next few decades, one that people have wondered about for over 2,000 years: Is there life out there in the universe? Is the Earth the only inhabited planet? New rovers and spacecraft are traveling to places like the icy moons of the outer solar system, Europa and Enceladus, that contain oceans beneath their surfaces. Telescopes are looking at Earth-like planets orbiting distant stars, and this will finally answer whether we can see other life in the universe. We live in incredibly exciting times and, despite our challenges, in a very privileged period of human history.

If you want to know what our place is in the universe, may I suggest that instead of listening to some old crusty academic like me, you get in your nearest taxi and ask a cab driver? These are the people who talk to the whole of human civilization day in and day out. They have some of the best ideas for some of the most profound questions. Ask a taxi driver.

To listen to the audio version read by author Charles Cockell, download the Next Big Idea App today: