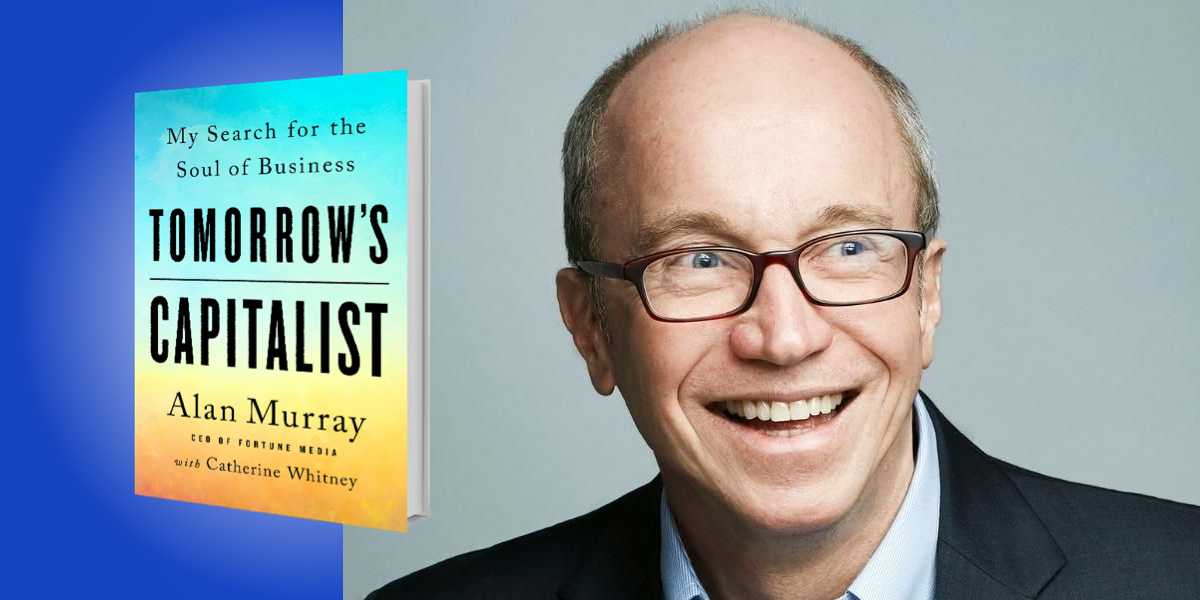 Alan Murray is CEO of Fortune Media. He oversees the business and editorial operations of the independent media company, and is known for expanding its digital and conference franchises. Prior to joining Fortune in 2015, Murray led the rapid expansion of the Pew Research Center’s digital footprint as president of the organization. Before that, Murray was at the Wall Street Journal for many years, and he served for several years as Washington bureau chief for CNBC.

Below, Alan shares 5 key insights from his new book, Tomorrow’s Capitalist: My Search for the Soul of Business. Listen to the audio version—read by Alan himself—in the Next Big Idea App.

1. The fundamental drivers of business value have changed.

If you go back 50 years and look at the balance sheet of Fortune 500 corporations in the 1970s, what you find is that more than 80 percent of the value came from physical stuff. It was equipment, oil in the ground, or inventories on the shelves—all things that required financial capital to support. So it makes sense that businesses focused on returns to capital, on financial returns to shareholders.

But if you do that same exercise today, what you find is that more than 85 percent of the value of the Fortune 500 today is intangibles. It’s things like intellectual property, software, brand value, the emotional connection that a brand has with consumers. Those are all things that are much less physical, but are also much less dependent on financial capital and much more dependent on people—on human ingenuity, on human emotion. So I think it’s natural that businesses had to shift their focus away from the physical and the financial and more toward people and the planet.

2. There’s a new generation in the workforce that expects much more from its employers.

“It’s this generational shift that is putting more pressure on employers to think about their social footprint, their social impact.”

Now I look at my daughters who are 29 and 31, and they want to make money, but they go to work to find meaning. They want to work for a company that is doing good things in the world. And it’s this generational shift that is putting more pressure on employers to think about their social footprint, their social impact, to make sure that they are providing purpose and meaning to their employees.

3. Social media has made it impossible for CEOs and corporate leaders to hide from many of these big issues.

Fifteen years ago, I was hosting a nightly news show for CNBC. And if we tried to get a CEO to come on to talk about a controversial issue, like transgender access to public bathrooms, or the religious liberties’ law in Indiana, or even the Russian invasion of Ukraine, they wouldn’t do it. They said, “Look, that doesn’t directly affect my bottom line. I’m sticking to my business. I don’t want to talk about it.”

But social media has changed that in some pretty dramatic ways—you can’t get away from these issues. Shortly after the invasion of Ukraine happened, I noticed on LinkedIn that many companies that hadn’t yet withdrawn their Russian businesses were being held accountable by employees, former employees, associates, and outsiders. You see this happen all the time. Social media has empowered people to force action on the part of companies.

“Social media has empowered people to force action on the part of companies.”

4. These changes in the ways that companies operate have fundamentally changed the nature of leadership.

If you go back about 50 years, companies were kind of leadership hierarchies. You had people in the field who would gather information, and they would hand it up the line. It would eventually get to the CEO and his top executive team, who would sit around, look at the data, make a strategy, and then pass orders back down the line.

But nobody runs their business that way today. You can’t, because things are moving too fast, and you have to empower the people in the field to make decisions about the business on their own, and not wait to hand it up the ladder. So for the people at the top in the C-suite, their job today is much less about telling people what to do, and much more about inspiring people—setting a North Star, setting moral boundaries to make sure people don’t go off the path. It’s much more of an inspiration and communication job than it was in the past.

“You have to empower the people in the field to make decisions about the business on their own, and not wait to hand it up the ladder.”

5. These changes may not affect every company—yet.

They probably start with the big, publicly held companies, but over time they are changing the norms and forcing action down on smaller companies. Let’s take climate as an example: it’s mostly big companies that have made net-zero commitments that they will get rid of carbon emissions from their operations and supply chains over the next 10, 20, 30 years. But when a company like Microsoft or Walmart says, “We’re going to get rid of corporate emissions from our supply chain,” that has big downstream effects on all the smaller companies that service them.

I had a fascinating conversation late last year with the CEO of Møller–Maersk, the big shipping company. He was talking about a huge investment he’s making in wind farms in the North Sea to power factories that will create hydrogen fuel for his ships. It’s a very expensive undertaking, and I said, “Why are you doing it?” He said, “I’m doing it because I have to. My customers have called me up and said, ‘Hey, I just made this commitment to get all carbon emissions out of my shipping by 10 or 20 years from now. You will have to do that for me, or I will have to find some other way to transport my products and supplies.’”

To listen to the audio version read by author Alan Murray, download the Next Big Idea App today: