The Tragic Science: How Economists Cause Harm (Even as They Aspire to Do Good) 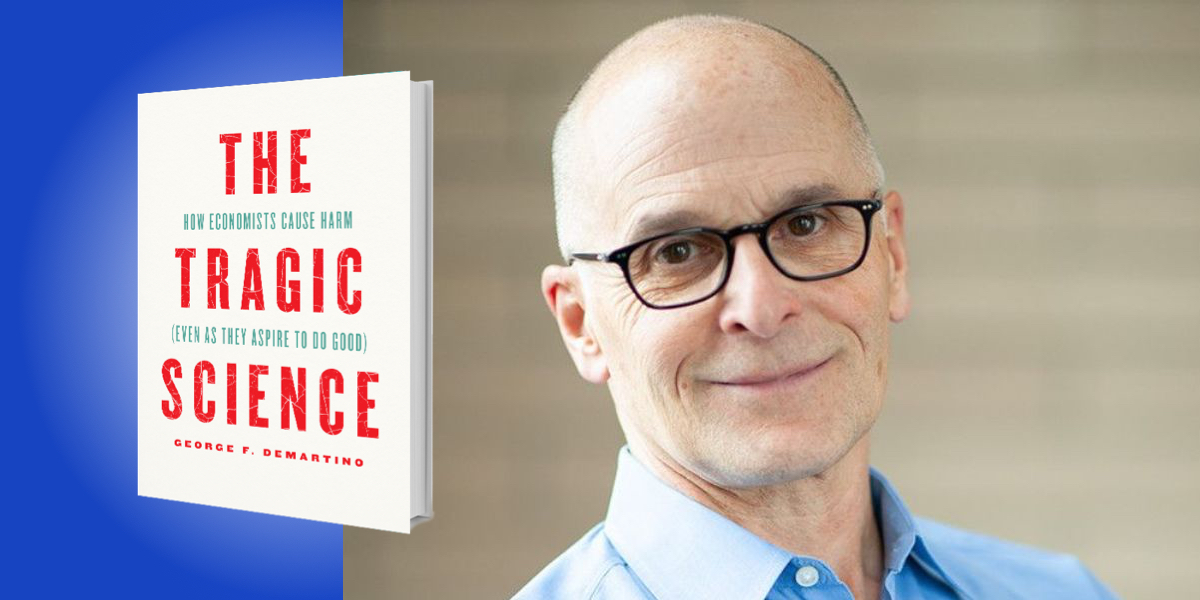 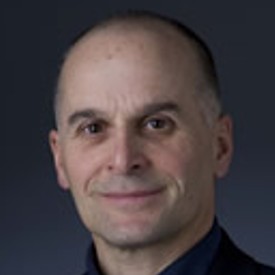 George DeMartino is an economist and professor of international economics at the Josef Korbel School of International Studies at the University of Denver.

Below, George shares 5 key insights from his new book, The Tragic Science: How Economists Cause Harm (Even as They Aspire to Do Good). Listen to the audio version—read by George himself—in the Next Big Idea App. 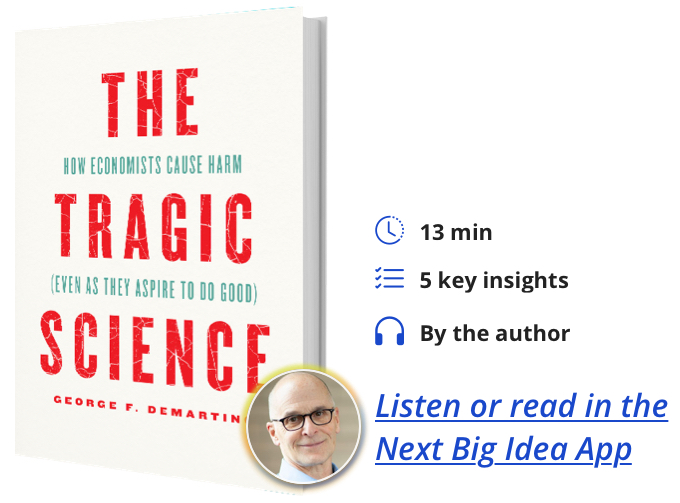 1. There’s a tragedy at the heart of economics.

Virtuous, well-trained economists contribute to serious or even devastating harm as they promote social betterment. The problem is inherent in the practice of economics, and that is the tragedy.

Think about the standard economist view of trade policy. Economists love free trade. Give them a little trade, they always want more. They obsess over free trade because when two countries begin trading, economists believe that both countries are made better off. They think that now each country can specialize in producing what it makes best, and then import the goods that it’s not so well-suited to make. Thus, trade promotes economic efficiency.

That sounds great. But economists have known for a century that when countries open up to trade, many people will be harmed. Think of all the low-waged workers in the United States who have lost their jobs owing to trade with China. The case of trade policy provides a window into a more general problem. Only very rarely does public policy benefit everyone. Instead, public policy that benefits some members of society almost always harms others. In communities facing rising unemployment because of trade, people suffer increased morbidity, mortality, violent crime, domestic abuse, alcohol and drug abuse, and social isolation. Yet, the vast majority of economists continue to press for free trade.

This is very dangerous. The work of economists to promote social betterment changes the world. Economists are often thought to know best about the economy and policy, so other professionals and political leaders defer to them. But economists enjoy zero control over the world. When you have a lot of influence but no control, you can cause a lot of harm. Think of a ten-year old boy behind the wheel of a Humvee, careening down Main Street. Does the child influence what will happen next? You bet! But does the child control what will happen? Don’t bet your life, or that of others, on it. But in economics we do bet the lives of others when we influence policy. From now on, when you hear central bankers talking about monetary policy, think of that little boy driving the Humvee. Central bankers can influence but not control what happens next.

“When you have a lot of influence but no control, you can cause a lot of harm.”

Economists can’t exert control because they face what I call irreparable ignorance. We can’t ever know enough to reliably forecast the inflation rate one year out, or the long-term effects of policy. This is because, as the great economist John Maynard Keynes said a century ago, about the future: “we simple do not know.” We don’t know and we can’t ever know all the causal processes that operate in the social world. We won’t ever know all of the relevant background conditions against which those causal processes operate. Even if we knew them today, that knowledge would be obsolete by tomorrow because the world is always changing in unpredictable ways. Policymaking is just one experiment after another.

3. Economists are trained to trivialize harm.

Economists are taught that all harms that people suffer from policy decisions, no matter how severe, can be fixed through monetary compensation. Now, I’ve never met an economist who actually believes that, but the methods we’re trained to use in evaluating policy require that way of thinking.

For example, economists are taught to use a compensation test to judge policy. It is a simple test which says that a policy is good if those who gain from it gain more than the losers lose. Are the gains greater than the losses—that’s the test. Economists do cost-benefit analysis to make the comparison of gains and losses. But is that the right way to decide if it’s ok to harm one group of people to benefit another group of people? Would you go to a doctor who looked at you and thought that snatching some of your organs would help someone else more than it would hurt you?

Economists get away with making that calculation every day. In that calculation, it doesn’t matter if those being harmed are already the worst off in society. In fact, the compensation test doesn’t pay any attention at all to inequality.

Over 50 years ago, the famous Chicago economist Milton Friedman made a distinction between two kinds of harm. What he called “positive” harm occurs when someone uses force to coerce choices that you otherwise would not make. Think of someone putting a gun to your head. In Friedman’s view, that kind of harm was illicit and government should intervene to stop it.

“The economics profession should hold up a mirror to society and highlight the irreparable harms of deprivation.”

He called a second kind of harm “negative” harm. Today this kind of harm is often referred to as “structural” or “social” harm. Friedman gives the example of an employer hiring white workers over Black workers, owing to racial prejudice. According to Friedman, the harm to the Black worker, though regrettable, should not be rectified through public policy because no one has a gun to the head; there is therefore, in his view, no coercion.

One problem with this way of thinking is that the social harm that Friedman ignored does extraordinary damage. We read in the local papers about individual murders, but not of the loss of life each day owing to deprivation. In my city of Denver, Colorado, 95 people were murdered in 2020, and this was rightly treated as horrific. But in that same year, it is estimated that over 120 people experiencing homelessness died prematurely from deprivation. That figure didn’t attract attention. Most political leaders ignored it if they were aware of it at all. At the world level, the UN estimates that 25,000 people die each day from starvation. The economics profession needs to do better—it should hold up a mirror to society and highlight the irreparable harms of deprivation. Too many economists continue to follow Friedman in dismissing social harm, and that represents a profound moral failure.

5. Economists can do better at confronting harm.

This isn’t speculation. Some economists today are joining non-economists in revising their thinking and practice around harm. For instance, those working in the new tradition called Decision Making Under Deep Uncertainty (DMDU) are managing the harms that come from public policy far more responsibly than has been the norm in economics. Practitioners who pursue DMDU presume that the future is unknowable—that we often can’t predict the effects of policy. So, rather than trying to predict, the approach looks to discover policies that are apt to be robust—meaning policies that will do well enough, regardless how the future unfolds.

“Some economists today are joining non-economists in revising their thinking and practice around harm.”

A second feature of the DMDU is that it empowers stakeholders rather than economists to evaluate policies. The stakeholders—those with skin in the game—are the ones who will wrestle with the question of which risks to take to promote their visions of the future. Instead of a compensation test there’s an effort to find common ground among those with different interests and values. Here, those who might be harmed by policy have a direct voice in decision making.

This approach does not always work, but neither does the current norm in which economists have unwarranted influence over policy that will cause substantial harm. DMDU represents one path forward for an economics profession that has done poorly facing up to its ethical duties.

To listen to the audio version read by author George DeMartino, download the Next Big Idea App today: