Two Beats Ahead: What Musical Minds Teach Us About Innovation 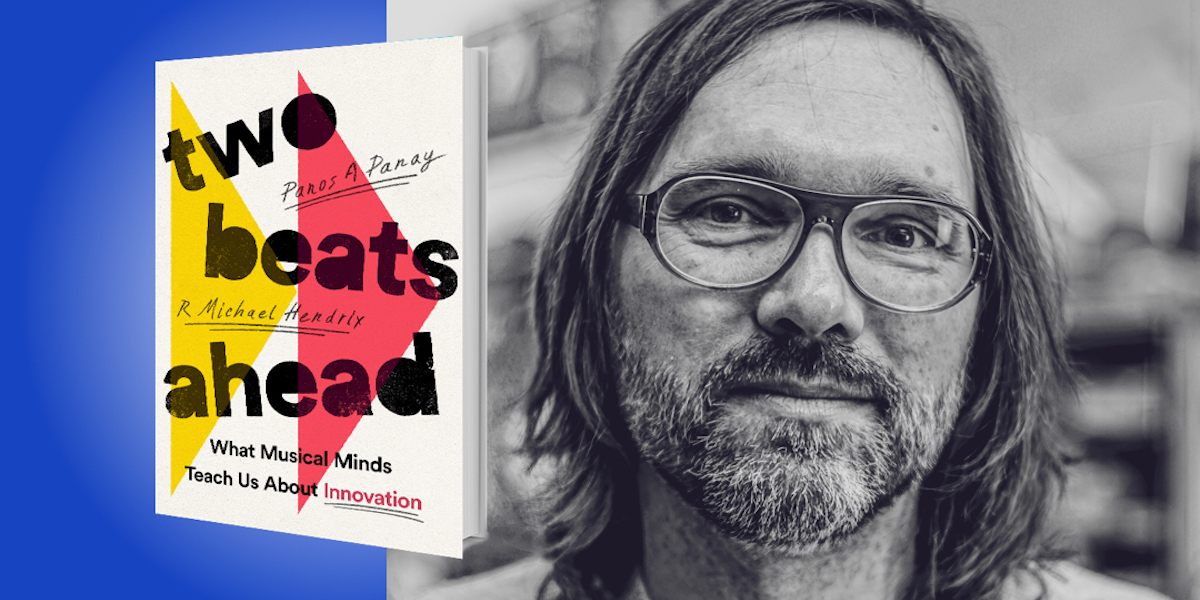 Below, Hendrix shares 5 key insights from their new book, Two Beats Ahead: What Musical Minds Teach Us About Innovation (available now from Amazon). Listen to the audio version—read by Hendrix himself—in the Next Big Idea App.

1. Listen for the space between the notes.

It wasn’t long after the iPhone launched that white earbuds were everywhere. The cheap accessories were “starter earbuds” in the words of Apple, but unlikely status symbols on the street. Dr. Dre complained to Jimmy Iovine that his kids were listening to his music with the cheap earbuds. He had spent hundreds of hours in the studio, perfecting the sounds of his records, only for it never to be heard due to the low-quality headphones. He and Iovine had been talking about new businesses they could get into. This is when Iovine said to Dre, “Don’t do sneakers, do speakers!”

“The thing to remember,” Iovine told us, “is that I didn’t know Beats was going to work. We had a great idea and understood the basis for its potential. Kids were listening to music on headphones that sounded terrible and that looked like medical equipment. We were interested in the power of music, the power of culture. Marry these two things together, then make it sexy, and we can jump over gatekeepers to build demand.”

Six years after the initial idea, Apple bought the design-driven brand, Beats by Dre, for nearly $3 billion. The true value of their brand came from their insistence upon the importance of the musical experience—rooted in listening to what both musicians and fans want. It’s important to note that they didn’t conduct surveys or polls; instead, they paid attention to what was missing—a fashionable, high-fidelity headphone. They listened to the gaps of the marketplace, just like they listened to mixes for hours in the studio.

“Listening is about discovering, getting inspired, and finding opportunity.”

The listening mindset is a musical mindset for everyone, not just musicians or producers. Listening is about discovering, getting inspired, and finding opportunity. It’s a perspective that learns to recognize the silence in our lived experience. Miles Davis nailed it when told his collaborator, “Don’t play what’s there. Play what’s not there.”

2. Experimentation is a discipline.

Daphne Oram began her career in the 1940s at the BBC. One of her jobs was creating sound effects for radio shows and mixing broadcast levels. Another responsibility was “shadowing” live concerts with a pre-recorded version so the broadcast would go on if interrupted by the Nazis bombing London. In off hours, Daphne experimented with the same technologies she was using during her shifts, but used them creatively: playing records at different speeds, recording them to tape and manipulating them further. In 1950 she wrote a composition called “Still Point” that combined these turntable and tape experiments with live orchestra. Instead of using the technologies to shadow the musicians, she turned the technologies into instruments themselves. She went on to found the BBC Radiophonic Workshop and today, Daphne is recognized as a pioneer of electronic music. The tape experiments of the Beatles owe her a hand, and bands like Portishead and Massive Attack built careers upon her combination of live and recorded sounds.

Experimenting is a mindset that is rooted in curiosity and discovery. Whether it leads to new insights or entirely new creations, experimentation is inherently optimistic, believing something interesting will come from exploration and play. The trick is to be committed to it regularly, and to be patient with the results. What doesn’t make sense today may make sense tomorrow.

3. Collaboration is a pursuit of others.

One of the best collaborators in the music business is Beyoncé. You know her by a singular name, but behind that name is a multitude of creators that she admires and pursues. Rolling Stone magazine called her album Lemonade “the ultimate collage, a potpourri of competing sounds, images, and ideas, plucked from a dizzying variety of far-flung sources.” Most songs on the album have at least three songwriters, and her hit song “Hold Up” has fifteen! Its creation story is like a volley of Olympic-level ping pong, bouncing back and forth between collaborators.

“Experimentation is inherently optimistic, believing something interesting will come from exploration and play.”

One of those collaborators, British songwriter MNEK, said he was given little instruction. Instead, he was told, “We asked you to be part of this because we like what you do. So just do your thing.” That’s an amazing request coming from a pop icon. But it wasn’t unusual—it’s the same approach Beyoncé took with guitarist Jack White when she told him, “I wanna be in a band with you.” She could have asked a session player to play like Jack White. But it wasn’t about her trying to solve a problem. She had a vision for the unexpected—the queen of pop R&B with the king of indie guitar rock. What came of that, a song called “Don’t Hurt Yourself,” charted in the Billboard Top 40.

Collaboration is a pursuit. It’s about discovery, a desire to learn and grow with someone else. It’s different from teamwork, which is about performing in your role with a shared objective to win. Collaboration acknowledges roles, but also sees them fluidly. It’s about making space for each other to lead or follow, and making something bigger than the sum of its parts.

4. Leading is about making space for others.

In the music world, a producer is akin to a film director, the person that oversees all the aspects of the work of art. There are notorious ones like Phil Spector, who was so abusive that he would hold artists at gunpoint to make them do what he wanted. While extreme, this “my way or the highway” style of leadership may be familiar to anyone who has ever worked a dysfunctional job.

Good producers, on the other hand, understand the importance of empowering and building upon the motivations of people who work with them. T Bone Burnett, an Oscar-winning and Grammy-winning producer whose artist roster includes Alison Krauss, Robert Plant, Elvis Costello, and Bob Dylan, shared a story with us about the moment he realized what his real role was in the studio.

He was working with the great gospel drummer Billy Maxwell, explaining to him what he wanted played in detail. Billy stopped him and said, “If you know exactly what you want, why don’t you just play it yourself?!” T Bone continued, “Here I was telling him what to do, and Billy was about ten thousand times the musician that I was. That was fifty years ago, and I’ve never forgotten it. It changed how I think. I came to realize that producing a record is, in a sense, like taking a photograph. You want to see the person’s best angle. You want to get the light the best for them, or you want to catch them in a moment of absolute honesty.”

“Creating the conditions for the success of others—that’s great leadership.”

T Bone’s observation reminded us of similar wisdom from Jimmy Iovine about working with Patti Smith and John Lennon. “I would just listen, get to know them, get in their heads, and find out what they wanted to do. My job was to help them do it.” Creating the conditions for the success of others—that’s great leadership.

5. Stay the same to reinvent yourself.

Nokia probably isn’t a company you think about much today, but they are an amazing example of resilience through reinvention. The company began as a wood pulp mill in the late 1860s, but over the next hundred years they grew into forestry, cables, and electronics. They even developed the first digital phone. Though they took a while to get their footing, once they began laying cables for telephones, their core ability was clear: creating the ingredients for communication. Embracing this core has helped them evolve their business decade after decade. Today they are a 5G network provider, and tomorrow, who knows?

Nokia’s story is the story of David Bowie. Which of his characters do you remember? Ziggy Stardust? Aladdin Sane? The Thin White Duke? Halloween Jack? Lazarus? And even with all of these personas, Bowie was unmistakably Bowie. How did he keep reinventing himself decade after decade, yet remain the same?

Bowie told 60 Minutes, “Taking away the theatrics and the costuming and the outer layer, I’m a writer. I started examining the subject matter I write about, and it really only boils down to a few songs based around loneliness to an extent, coupled with isolation, some kind of spiritual search, and looking for a way into communicating with other people. And that’s about it. That’s all I’ve written about for forty years. It hasn’t really changed. I’ve dressed it different ways throughout my life.”

If there’s anything we’ve learned from Bowie—or Nokia for that matter—it’s that self-awareness makes change easier. Know your truth—and know that you have the freedom to change because of it.

To listen to the audio version read by R. Michael Hendrix, download the Next Big Idea App today: