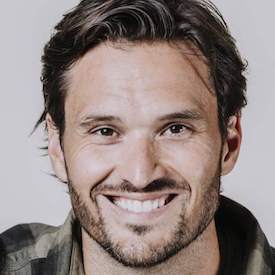 Jake Wood is the co-founder and CEO of Team Rubicon, a non-profit that deploys military veterans on disaster relief missions in the U.S. and abroad. Prior to launching Team Rubicon, he spent four years in the Marine Corps, serving in Iraq and Afghanistan as a scout-sniper. He was awarded the Navy-Marine Corps Commendation Medal, and in 2018 received the Pat Tillman Award for Service at the ESPYs.

Below, Jake shares 5 key insights from his new book, Once a Warrior: How One Veteran Found a New Mission Closer to Home. Download the Next Big Idea App to enjoy more audio “Book Bites,” plus Ideas of the Day, ad-free podcast episodes, and more.

Next Big Idea Club · Once a Warrior: How One Veteran Found a New Mission Closer to Home

1. Leaders are nothing if they are not virtuous.

While serving as a Marine in Afghanistan, my team leader pulled us aside and said his only measure of success for our team was that we go home with our honor and integrity intact. Nothing—not the success of the mission nor our own safety—would ever be placed ahead of our honor and integrity. He had taken a morally ambiguous situation and made it starkly black and white.

I’ve since learned that this type of leadership is hard to come by in today’s society. It’s often easy for leaders to take what should be simple, black-and-white choices and make them gray. The ease with which they can find that gray is often disturbing—but those they lead deserve better. They deserve to know that their leaders will never compromise the organization’s values for things like profit or market share. The stakes are bigger than leaders often imagine. At a minimum, members of a team will mimic and reflect the leader’s decisions and behaviors, and they may even internalize and aspire to them. Leaders, no matter how competent, are nothing without virtue.

My organization, Team Rubicon, was born amid chaos. Formed in the aftermath of the devastating 2010 Haiti earthquake, our small team navigated a post-apocalyptic disaster zone to quickly deliver aid to Port-au-Prince’s hardest-hit areas. In the decades since that mission, we have deployed teams large and small to the world’s most chaotic humanitarian crises. Our aim isn’t to survive those moments, but to thrive in them.

“The best leaders view chaos as an opportunity, not an obstacle.”

Too often, chaos paralyzes organizations and their leaders. Occasionally you will find leaders who can effectively manage their teams through those moments, but every once in a while, you will observe a leader or organization who seemed to be built for that moment. The best leaders view chaos as an opportunity, not an obstacle. They know that bold action, decisive leadership, and empowered teams will unlock the agility, ingenuity, and resilience that is needed to surge forward rather than retreat in the face of chaos. That’s why the military’s most elite units frequently espouse the phrase, “Get comfortable being uncomfortable.” Conquering chaos is not some innate talent that some are born with while others are not—it’s a muscle memory that can be formed by making yourself familiar with hardship.

When building teams, most leaders focus on finding great talent. They incorporate their companies in talent hotbeds like Silicon Valley or New York City, and they recruit only on the top college campuses or from companies like McKinsey, hoping a strong pedigree will be a good indicator of talent. But talent is overrated. Passion, marked by relentless initiative, tenacity, and enthusiasm, will overcome nearly any talent deficit a person might have.

Ultimately, though, an organization’s culture is more important than both the talent and passion of the team members. Why is culture so important? A strong culture consistently leads every member of a team to the right decision, action, or behavior, regardless of whether they’ve been directed to or not.

4. Storytelling is the most underutilized tool in most leaders’ toolkits.

5. Military veterans are assets to be leveraged, not liabilities to be discounted.

The prevailing narrative is that America’s men and women returned from our wars in the Middle East broken and in need of charity. Some certainly did, and as a nation, we must take care of them. But most returned stronger and more capable. They’re not in desperate need of help—they’re in desperate need of a challenge, and they have a lot offer. The U.S. government has already invested tens of billions of dollars into their training. They’ve learned sophisticated skills on the most advanced equipment, and they’ve been asked to execute complex missions in resource- and information-constrained environments where failure is not an option. Compared to their peers, they have an inordinate amount of leadership experience. These aren’t hollow shells of their former selves; they are mission-oriented team players, and we should ask them to help solve our most complex societal and organizational problems.