Wasted: How We Squander Time, Money, and Natural Resources and What We Can Do About It 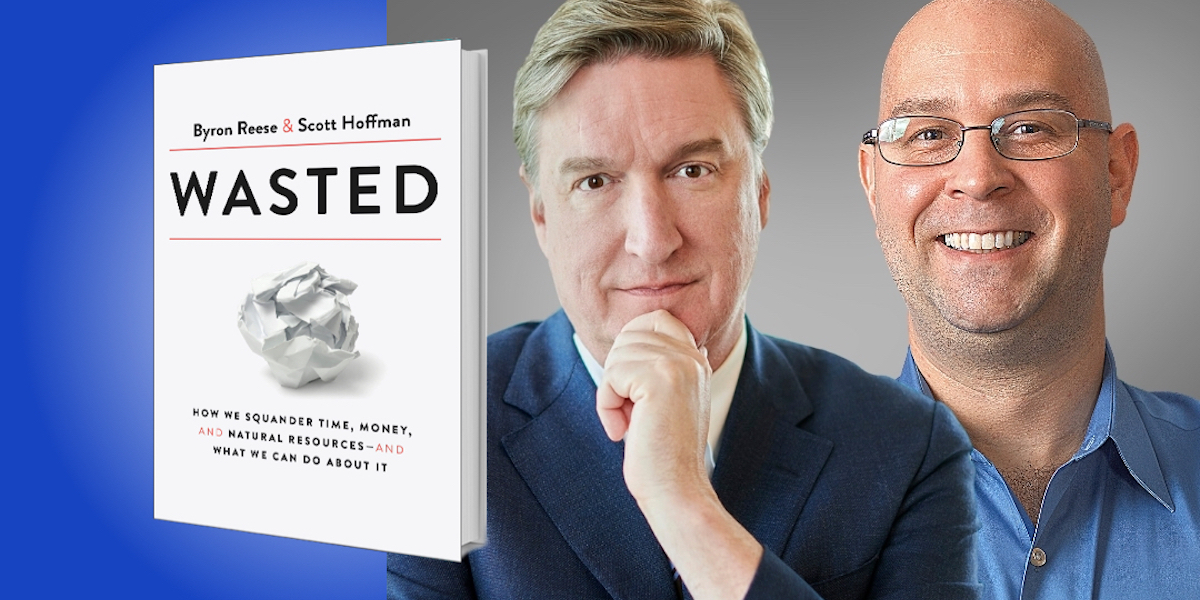 Byron Reese is an entrepreneur who has written three books on future technology and artificial intelligence. Scott Hoffman is the CEO of International Literary Properties and one of the founding partners of Folio Literary Management.

Below, Byron and Scott share 5 key insights from their new book, Wasted: How We Squander Time, Money, and Natural Resources—and What We Can Do About It (available now from Amazon). Listen to the audio version—read by Scott himself—in the Next Big Idea App.

1. That blue bin is messing with your mind.

Two Boston University professors published a paper called “The Effect of Recycling Versus Trashing on Consumption.” They presented student test subjects with four pitchers of fruit juice alongside a large stack of disposable cups. To the right of the table was a trash can. They asked students to taste each of the four juices and rate them from favorite to least favorite.

But what they were really interested in was counting how many cups each student used. Some students used just one cup and refilled it. Others used four cups trying a different juice in each one. On average, 2.7 cups per student were used.

But then the experimenters did something rather interesting. They got rid of the trash can and replaced it with a blue recycling bin. The number of cups people used went up dramatically—from 2.7 cups to 3.5. So what’s going on? One obvious interpretation is that the blue bin gives people permission to waste. When you see a trashcan next to the table, you think, “Oh, that’s going into the landfill. I don’t want to waste.” But when you see the blue bin you say, “Oh, they’re recycling that, so it’s okay for me to use additional cups.” An unintended consequence of recycling bins is that they seem to promote more consumption.

“Overall, the broken window is a waste; it’s just tough for people to see things beyond what’s immediately in front of them.”

When it comes to waste, humans are pretty terrible at understanding the impacts of events beyond first-order effects—that is, things that can be seen immediately. One way to illustrate this principle is with what economists call the “broken windows” fallacy.

Basically, it goes like this: A child throws a baseball through a window and breaks it. Upon reflection, the townspeople decide the kid has actually done a good thing. A glazier all of a sudden has work where there was none before. She, in turn, hires a laborer to install the window. The laborer needs transportation to get to the job, which provides income to an Uber driver. Overall, a tremendous amount of economic activity has been generated by one errant pitch.

But as Frédéric Bastiat pointed out in his essay “That Which Is Seen, and That Which Is Unseen,” the money used to replace the glass would have almost certainly been used for something else—perhaps window shades, which would provide a net benefit to the homeowner, while still benefiting those she trades with. In the broken window case, though, the homeowner is simply restored to the status quo.

Overall, the broken window is a waste; it’s just tough for people to see things beyond what’s immediately in front of them.

3. I have always loved you in that outfit.

The world economy is about $80 trillion a year, and of that, 3% is spent on clothing. It seems like a low number, especially when you consider the outsized influence that the fashion industry has on popular culture. When you work the math out, it means that the average person spends about $300 a year on clothing. Now, as far as averages go, that one’s particularly misleading because the vast majority of people spend way under $300 a year on clothing, and a few people spend dramatically more.

“Very few of the pieces of clothing that are donated to thrift stores are ever worn again.”

In the prosperous West, where people are constantly posting on social media, the fear of being seen in the same outfit repeatedly is very real. Perhaps the most biting thing you can leave on somebody’s social media feed is, “I have always loved you in that outfit.”

Now, a lot of people can justify spending the money that they do on fast fashion, knowing they won’t wear it very often because they’re going to donate it to charity, and it will be worn by a second and third and perhaps a fourth person. But in reality, this isn’t what happens. Very few of the pieces of clothing that are donated to thrift stores are ever worn again. To be sure, some are, but the majority are either shredded for stuffing for chairs, turned into shop rags, burned for fuel, or most likely of all, put into a landfill never to be seen again.

So why aren’t more clothes worn a second and third and fourth time? In a sense, the fashion industry is a victim of its own successes. The modern supply chain is so efficient at getting clothing produced at such low prices that a secondary market cannot be price-competitive with new clothing.

Money, in and of itself, can make it harder for people to quantify waste. To illustrate this principle, let’s look at what seems like a textbook example of gratuitous waste—a cartoon fatcat lighting a cigar with a hundred-dollar bill. At first blush, this clearly would appear to be a waste of $100.

But not so fast. Destroying a hundred-dollar bill isn’t like intentionally pouring a hundred dollars’ worth of, say, perfectly good milk down the drain. Sure, Uncle Moneybags can’t spend that cash on anything else. It’s gone—to him. But there are unseen effects. As George Mason University economist Alex Tabarrok points out, the only true waste here is the value of the paper itself, which in this case is a little over 14 cents.

Why is that? Well, the $100 that the currency represents causes deflation all across the economy when it goes up in smoke, slightly lowering prices on goods and services. In effect, torching a $100 bill makes all the other currency in the economy worth $100 more, resulting in net waste that’s pretty close to zero.

The Earth has a natural carbon cycle where its systems give off carbon dioxide and absorb or sequester carbon dioxide. Nobody is entirely sure how the balancing act occurs, but before we started burning fossil fuels around the Industrial Revolution, the amount of carbon in the atmosphere was pretty steady, varying in a relatively tight range around 750 gigatons of carbon dioxide emitted and absorbed, keeping it all in balance.

Then along came humans, and we eventually began emitting an additional 40 gigatons on top of the 750. Now this would be well and good if the Earth’s systems were dynamic enough that they just absorbed the 40, but they don’t. They’re able to absorb about 20 of the 40, leaving about 20 gigatons every year accumulating in the atmosphere. One part per million in the atmosphere is about eight gigatons. And that means in a given year, we’re growing the amount of carbon dioxide in the air by 2.5 parts per million, which doesn’t seem like that much.

It’s reasonable to say that the Earth will eventually get back into stasis—it just may take a few thousand years. But in the meantime, we shouldn’t take too much comfort in the fact that there’s so little carbon dioxide in the air, in the grand scheme of things. After all, a human being with a body temperature of 100 degrees has a slight fever, a human being with a body temperature of 110—that’s fatal. And just that tiny difference between what would naturally be up there and that additional bit we’re adding looks like it’s highly problematic.

To listen to the audio version read by Scott Hoffman, download the Next Big Idea App today: