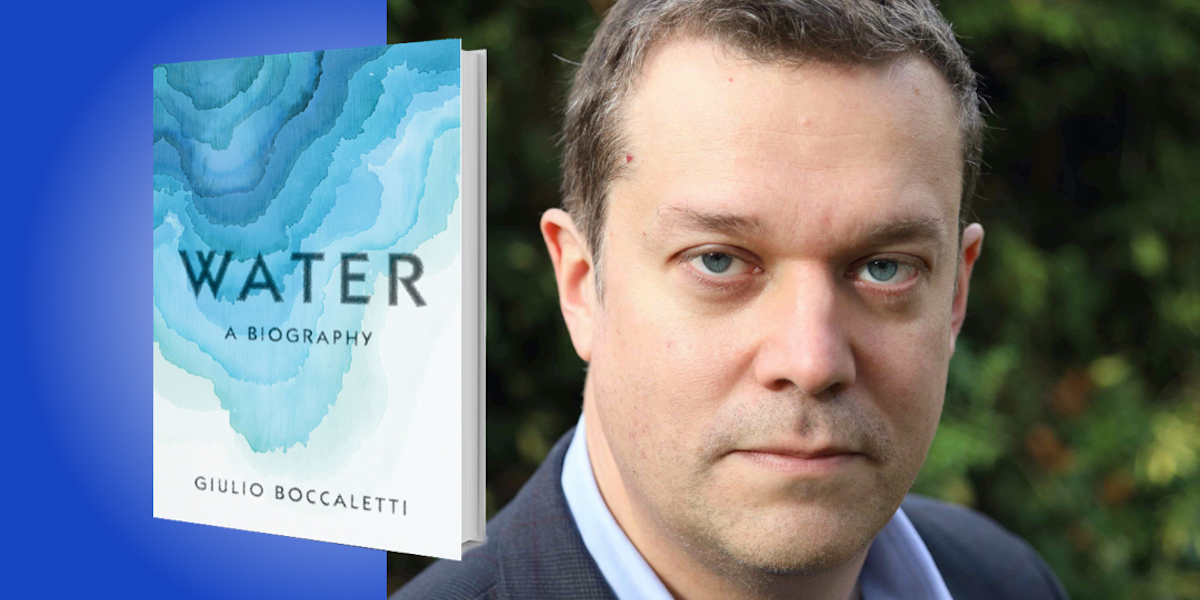 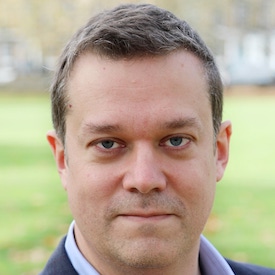 Giulio Boccaletti is a globally recognized expert on natural resource security and environmental sustainability. He is an honorary research associate at the Smith School of Enterprise and the Environment, University of Oxford. Trained as a physicist and climate scientist, he holds a doctorate from Princeton University, where he was a NASA Earth Systems Science Fellow. He has also been a research scientist at MIT and the chief strategy officer and global ambassador for water at The Nature Conservancy, one of the world’s largest environmental organizations.

Below, Giulio shares 5 key insights from his new book, Water: A Biography. Listen to the audio version—read by Giulio himself—in the Next Big Idea App.

1. Water flows through our deepest memories.

A man saves himself from a catastrophic flood, and he is told by a god to save all animals. He floats endlessly in a boat he built, until he finally sends out a dove in search of land. He finds it, and he lands on top of a mountain. The flood ends, and life begins again. Sounds familiar, right? But actually, this is not Noah’s story from the Old Testament. It is a story that is at least a thousand years older than the Bible. It’s the story of Utnapishtim, a patriarch from ancient Mesopotamia, whose adventure is told in the Epic of Gilgamesh.

In researching my book, what struck me were the dozens of ancient stories I encountered, all of them arguing that the origin of society is firmly planted in water. There is the Chinese myth of the Jade Emperor, Lord of Heaven, who locked up four dragons in mountains only to see them turn into the rivers, Yangtze, Yellow, Pearl, and North, the sources of the wealth of the Chinese empire. The Lenape, the original inhabitants of today’s Manhattan, believed they were the descendants of the survivors of a great deluge. The Navajos thought they descended from insect people, who survived a great flood sent by the gods to cover the land. There’s also the great Unu Pachakuti flood of the Inca tradition, and the old Norse frost giant, Aurgelmir, the only one to survive a destructive flood by building himself a boat.

“While water did not cause the rise of sedentary civilization, it did shape its journey—our journey.”

All of these stories reflect a common, ancient human experience. The millennia between the last glacial maximum, when most high latitudes were covered in ice, and the rise of complex sedentary societies some 7,000 years ago were years during which the great glaciers of the world melted, cutting through mountains and shaping planes and growing coastlines. The landscape was transformed by water flowing over it, so it’s not surprising that fragments and memories of that period made their way into our origin stories. While water did not cause the rise of sedentary civilization, it did shape its journey—our journey.

The Greek reforms that defined the constitution, and that gave the world ideas of democracy, were a political solution to the demands of a group of soldiers called the hoplites. They were politically powerful because they were militarily indispensable, and they were militarily indispensable because they could afford the equipment and the training needed to be an effective fighting unit. They could afford all that because they were also farmers whose fields were productive, and their fields were almost entirely rain-fed. In other words, it was the availability of water that led to the birth of certain democratic ideals.

The political experience of Greece and Rome then made its way through Arab scholars, humanists, and the Enlightenment into the very heart of the modern state. The politicians of the modern age were imbued with humanist and classical principles; James Madison and Alexander Hamilton used the pseudonym “Publius” to sign their Federalist papers after Publius Valerius Poplicola, one of the first consuls of the Roman Republic. Even Sun Yat-sen, father of the Chinese nation, when lecturing on liberty and democracy, made ample references to those classical experiences.

These stories support a consequential insight: The foundations of modern constitutionalism are the result of a relationship with water that developed over two and a half thousand years ago.

“It was the availability of water that led to the birth of certain democratic ideals.”

3. A social contract written on water.

I am originally from Bologna, a town in Northern Italy. Bologna is home to the oldest university in the world, which was founded in 1088. And it is at that university that modern law intersected with the story of water. In the 12th century, the Corpus Juris Civilis, the Justinian law code, resurfaced at the university from the darkness of history. At that time, its high priest was Irnerius, a legendary scholar and professor whose teachings restored the integrity and lucidity of Roman law to Europe. And because water played a fundamental role in the medieval economy, jurisprudence focused on it. Ideas of territorial sovereignty emerged from litigation over who got to decide who owned what in a mobile world of water. Even the Magna Carta had its roots in this legal tradition; Article 33, for example, dealt with the impediments to navigation on the Thames. Many jurists that lived in England had trained in Roman and canon law in Bologna, and eventually this legal tradition evolved into modern constitutionalism and jurisprudence.

In the book, I also tell the story of George Washington’s involvement in the Potomac Company, a river company that was supposed to connect the Ohio Valley to the Eastern seaboard. The problem was a legal one; the Articles of Confederation did not contemplate mechanisms to settle commercial disputes between states. So Washington convened a meeting of the riparian states of the Potomac at his Mount Vernon estate, and the resulting compact became the inspiration for James Madison’s Annapolis convention—and for the Philadelphia convention that produced the US constitution.

There is a key insight here: Sharing water when there isn’t enough, or figuring out how to manage a flooding river to protect communities and deciding who can live where, requires balancing the needs and rights of individuals with collective security. Over the centuries, that balancing act has made a significant contribution to the legal and constitutional architecture of society.

“Ideas of territorial sovereignty emerged from litigation over who got to decide who owned what in a mobile world of water.”

4. Water: For drinking or fighting?

In early 2011, I found myself in Addis Ababa, Ethiopia. 1,500 miles downstream in Egypt, the Hosni Mubarak regime was facing its demise in the Arab Spring. The very same day the Egyptian president was being deposed, Meles Zenawi, then the Prime Minister of Ethiopia, announced that construction on the Blue Nile had begun of what is now known as the Grand Ethiopian Renaissance Dam. For years, Egypt had threatened retaliation had Ethiopia attempted to dam the flow of the Nile, but now with Egypt’s government in difficulty, it was time to act. Ten years later, the dam is about to start operations, and tensions with Egypt are still unresolved—but so far, the two countries have managed to restrict themselves to a conflict of words.

The concern that water could be a potential source of conflict is a common one. People often talk about water wars, but more often than not, water is cause for cooperation rather than conflict. When partition happened between Pakistan and India in 1947, the two countries found themselves adversaries, tied by a single river, the Indus. Their relationship was and is fraught, but through several conflicts, they have continued to manage a kind of tense cooperation, one regulated by the Indus Waters Treaty.

Indeed, conflict almost never travels via the rivers and floodplains of the world, but it will travel through the institutions of human society. A key insight from my book is that collapse often does not arise from a flow of water, but one of people. When a state fails to deliver on its promise of water security, the most vulnerable suffer disproportionately—and their response can be consequential. From the invasion of the Sea Peoples at the end of the Bronze Age to the Huns appearing on the shores of the Black Sea, the sharp end of the problem of water is the forced migration of the vulnerable.

“People often talk about water wars, but more often than not, water is cause for cooperation rather than conflict.”

Some years ago, I visited the Three Gorges Dam. It is an enormous piece of infrastructure, one of the largest in the world. 28 million tons of concrete hold back a 600-kilometer-long reservoir in the main stem of the Yangtze river in China. I remember looking at this massive object over two kilometers wide and wondering what went through the minds of those who decided to build it—especially given that it involved relocating 1.5 million people, submerging countless historical artifacts, and pushing to extinction several species that depended on the river.

There was a time when the United States was the global hegemon when it came to hydraulic infrastructure. The Hoover Dam, Fort Peck, and Bonneville were the temples of modernism that inspired the world to transform its landscape. The Tennessee Valley Authority was such a flagship project that replicas popped up everywhere—from the Jordan Valley Authority to the Helmand Valley Authority in Afghanistan, to the Awash Valley Authority in Ethiopia. Today, everyone operates under the illusion that water on the landscape is, or should be, nothing more than an inert backdrop on the stage of human events. Such was the reach of the American hydraulic republic.

But the Three Gorges Dam represents a passing of the torch. Today, China, not the United States, is the hydraulic engineer of the world. Across Africa, Asia, and Latin America, Chinese finance, expertise, and companies are building infrastructure for the 21st century. Over the next 20 years, they are poised to deliver as much as the West built in a full century.

Indeed, the rise of China has restarted the process of landscape and water development, one that may well dwarf what has happened so far. When it comes to water, it may be that if the 20th was the American century, the 21st will be the Chinese one.

To listen to the audio version read by author Giulio Boccaletti, download the Next Big Idea App today: