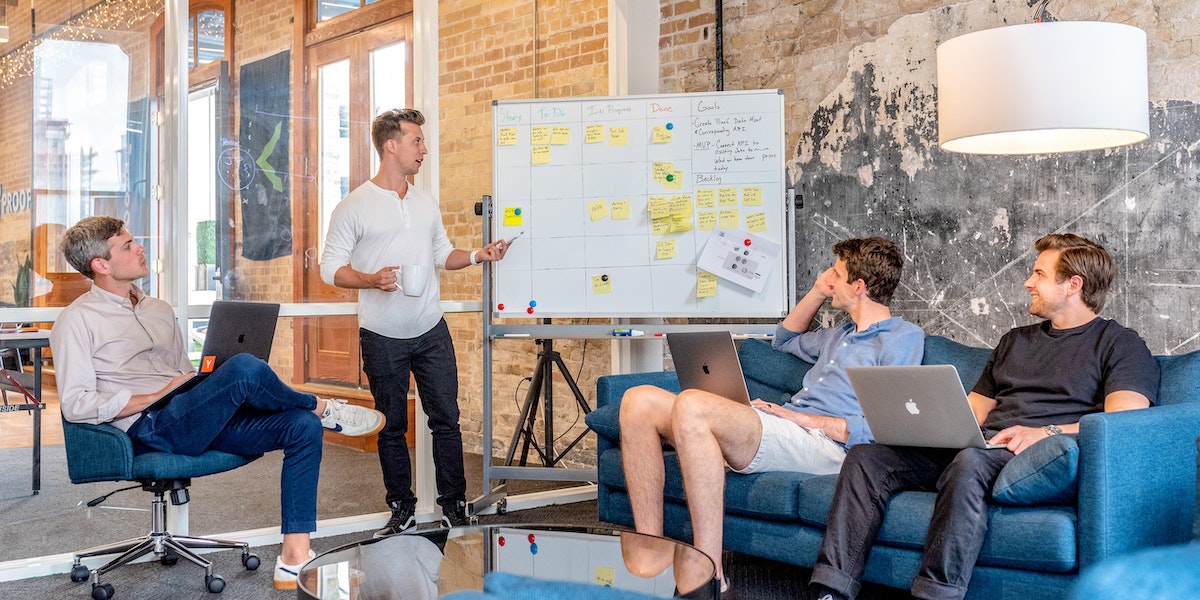 Adam Neumann—handsome, clever, and rich, with a comfortable home (eight of them, actually) and a happy (if slightly hyperactive) disposition—seemed to unite some of the best blessings of existence. And he had lived forty years in the world with very little to distress or vex him.

In the summer of 2019, he was presiding over the most valuable startup in America: WeWork. To the cynical, it was a glorified desk rental company. To Adam, it was the company that would “elevate the world’s consciousness,” broker Middle East peace, build offices on Mars (presumably with the staple WeWork perks: ping-pong, cold brew, free beer), and turn Adam into history’s first trillionaire. But then the searing sun of reality melted the wax that held his wings together, and he plummeted to Earth, the value of his company going up in smoke behind him like a contrail.

The story of Adam’s spectacular rise and calamitous fall is the subject of a new book called The Cult of We: WeWork, Adam Neumann, and the Great Startup Delusion. It was written by two Wall Street Journal reporters, Eliot Brown and Maureen Farrell. Their real-time coverage of Adam’s erratic behavior and flagrant self-dealing helped to hasten his professional demise.

In today’s episode of the Next Big Idea podcast, Eliot and Maureen speak with Mike Isaac, author of Super Pumped: The Battle for Uber, about hubris, greed, tech culture, and bad judgment. Listen to the full episode below, or read a few key highlights.

How Adam Neumann went from making onesies with kneepads to running the most valuable startup in the country.

Mike Isaac: I want you to tell us a little bit about Adam [Neumann]’s earlier days before he became the dude on the cover of Forbes. How did he come into this? Was he a serial entrepreneur? Was this his first big thing?

Maureen Farrell: So he was a serial entrepreneur, but his first companies were kind of ridiculous. He immigrated from Israel and came to New York, and his first business was called “Krawlers.” He’d had this epiphany that babies crawl, but their knees must really hurt. So he created onesies with built-in kneepads, and he was telling everyone he knew that this was going to be the biggest business they’d ever seen. So from the very beginning, he did not lack ambition.

Mike: Did he have a kid at that point?

Mike: He just decided to dive into baby-land?

Maureen: He dove into baby-land. He dropped out of Baruch College in New York, where he was studying entrepreneurship, to pursue this grand idea. But eventually, he wound it down. He met his co-founder, Miguel McKelvey, who was an architect, and they came up with this idea of subdividing real estate. They started it in Brooklyn first—an earlier iteration of it called Greendesk—and from the very beginning, his ambitions were grandiose. But it worked right away. It was right around the financial crisis. There was tons of real estate that landlords needed to get someone to use because the economy was in trouble. But the landlords in Brooklyn didn’t want to scale in a big way, so Adam and Miguel started again. They sold Greendesk back to the landlords, and WeWork was launched in 2010.

If you want to raise venture capital, tell the world you’re a tech company—even if you’re not.

Mike: As reporters, we talk a lot about “tech multiples.” Every company wants to look like a tech company because they want to be valued like a tech company. That’s the whole point of saying, “we’re not a real estate company.” Did Adam get that early on?

Maureen: It seems like he just figured that out quickly. When WeWork secured its first big investment, Adam was already glomming onto that concept. It was around the time The Social Network came out, and Facebook was about to go public. Adam became friendly with Sean Parker, one of the early Facebook backers. And Adam would go to these crazy parties at Sean’s house and meet all these tech entrepreneurs and say to himself, “Wow, look at their lives. They’re amazing!” And he would tell all of them, “I have the physical Facebook. That’s what I’m building right now.”

Mike: What does that mean?

Maureen: Exactly. They sort of laughed him off, but it still moved Adam from the world of real estate to realizing that tech was where the money was, and where he was going to grow this company.

“Innovative, killing it, scale. You say those words in a row, and money drops out of a bag.”

Eliot Brown: Adam had raised money from New York real estate guys and a few random investors. But then he realized that venture capital is where this money is. His emotional intelligence is so extraordinary that he very quickly learns what people want to hear. I imagine it did not take him many conversations with these VCs, who often speak in clichés and are caricatures themselves, to figure out the right words to say: Innovative, killing it, scale. You say those words in a row, and money drops out of a bag.

Mike: It’s weird, I keep repeating those things to myself on the street, and it doesn’t happen to me…

The startup world has a gender-bias problem.

Mike: It’s hard not to read your book and wonder about how gendered the startup world is. It feels like doors fly open for attractive, charismatic, bro-y dudes—even if their ideas are totally flimsy. Do you think a female founder could have flown as high as Adam?

Eliot: Yeah, no. Intentionally or not, the startup funding world looks at these signals for what makes a good founder. I asked an early investor in Robinhood, “What’s all the hype about this company? Why is it so great?” And he said, “The team. They’re just amazing.” And I was like, “What’s amazing about them?” And his answer was that they both went to Stanford.

“A huge amount of this is not based on merit or business metrics. It’s based on selling—and the salesmen are men.”

Eliot: So I think they just look for these things that they think are going to make a company successful. It’s the same reason why these founders get control. The investors are like, “Well, this founder does a lot of things like Steve Jobs, and Steve Jobs was a man.” Also, the people who give the money are men. And the people in leadership roles at these companies, WeWork included, are men. So a huge amount of this is not based on merit or business metrics. It’s based on selling—and the salesmen are men.

Mike: This is kind of what venture capital does to every idea. They’re like, “This might be a great idea. Let’s supercharge it by dumping a whole basket of money on it.” Is there a version of WeWork where maybe they didn’t take VC—or took it more responsibly—and made it work out in the right way?

Maureen: I think Eliot and I might have different answers to this. I just keep on wondering: What if people just stood up to Adam along the way? What if the board of directors really held him responsible for some of the things he was doing? They basically abdicated their duties and said, “Oh, he’s a visionary. He’s one of the few people who can scale this business.” But what if people had pushed back? Could this have actually been a good company and worked down the road?

Eliot: From the beginning, I was confused about why WeWork took venture capital at all. The point of venture capital is to help you build something that you need to invest in. You need a few years of runway, and then you make huge profits later on. WeWork just doesn’t fit that profile at all.

It used to be that you had normal businesses that didn’t take venture capital. They could use things like debt. And in fact, if you look at WeWork today, it is a real business. They need to fill up their offices because of the pandemic, but they are now following the exact same business model that others have shown can be profitable. But when you’re growing at 200% a year and buying surf pool companies and jets, that’s a good way to not be profitable.