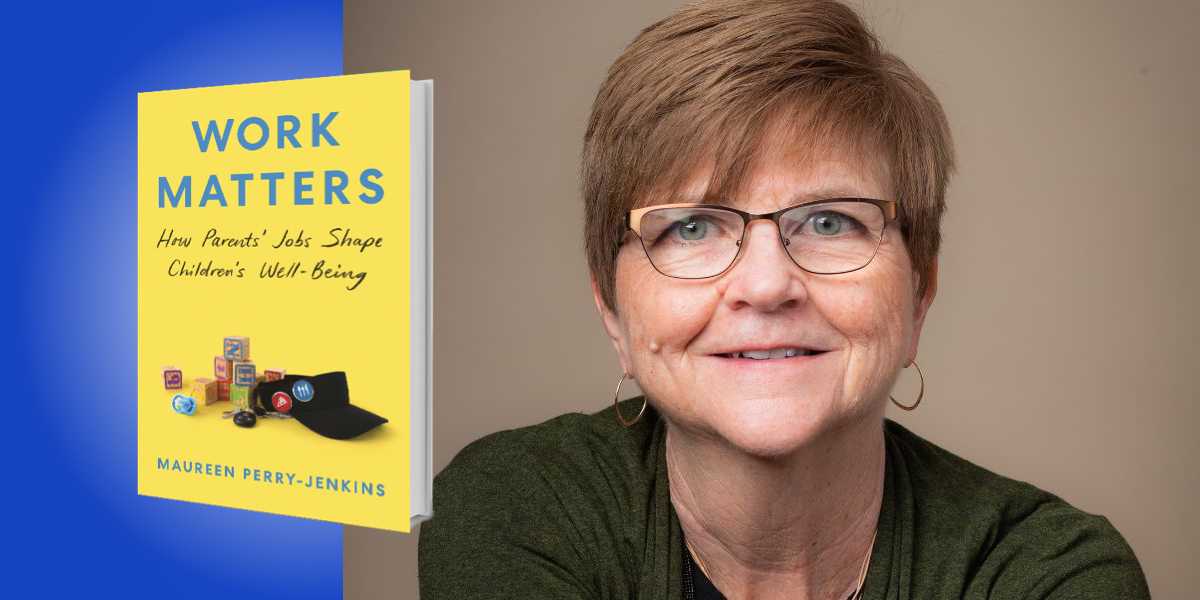 Maureen Perry-Jenkins is a professor of psychology at the University of Massachusetts, Amherst. She has spent twenty years researching questions about the effects of new parents returning to work soon after childbirth, and more than 350 families (primarily low-wage) allowed her team to follow them from pregnancy to a child’s first year of elementary school.

Below, Maureen shares 5 key insights from her new book, Work Matters: How Parents’ Jobs Shape Children’s Well-Being. Listen to the audio version—read by Maureen herself—in the Next Big Idea App. 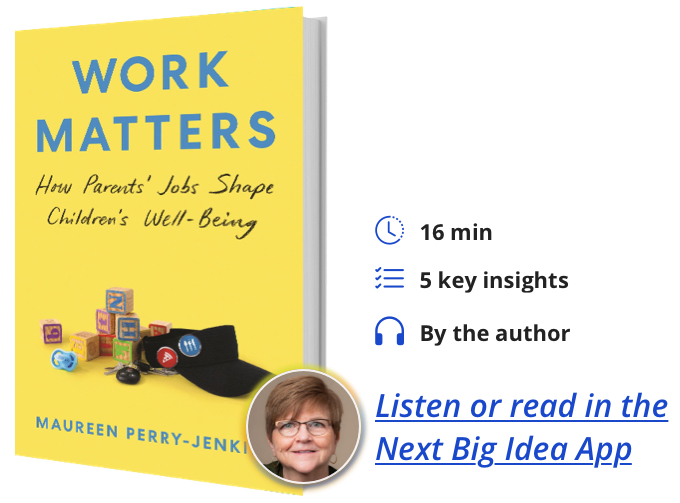 1. What happens at work, shows up at home.

The hours a parent spends at work outside the home has little (if any) effect on a child’s attachment to their parents, or on the child’s overall well-being. Far more important is what the parent experiences on the job—that has a profound impact on the well-being of children. Think of the job as a member of the family. It has a place at the dinner table, becomes involved in mom and dad’s relationship, and shows up in the way parents relate to their kids.

For instance, workplace practices that give workers autonomy (control over how they do their jobs or manage their time) are a predictor of positive physical and mental health for parents, and in turn, their young children. Also, young working moms with a supportive supervisor at work had fewer symptoms of depression. This is a critical finding because maternal depression can impede the healthy development of a child. And of particular importance: working moms and dads who felt supported at work had children who were more advanced on measures of social skills and had fewer behavioral problems in their first year of school.

Work matters: what happens to a parent on the job can directly affect the physical and mental health of children and families.

There is a widely shared perception that low-wage work is tedious and demeaning—bad work. But this popular narrative is misleading. Many of the working parents in our study found satisfaction in their work, and took pride in doing their jobs well. To be sure, for many low-wage employees the workplace is an unhappy place, or even degrading and harmful. But it’s not usually the actual work that makes a bad job. More often it’s the workplace that makes a job miserable.

“Workers who have the trust and support of a supervisor show up differently on the job.”

In a bad workplace, employees are bound by inflexible rules and procedures. They feel alone, disrespected by supervisors, and unsupported by co-workers. Take the story of Emma, for instance, which is an all-too-common circumstance: Emma was a driver for a package delivery company. After eight weeks of unpaid leave following the birth of her daughter, she returned to work. She asked permission from her boss to use the main office to pump breast milk, offering to start her deliveries early or work late. His response was a flat-out no. So, Emma pumped breast milk in the back of her unheated truck throughout a frigid New England winter.

Workers need someone in their corner. Workers who have the trust and support of a supervisor show up differently on the job. They express greater commitment and they take initiative. They show up differently at home, too—as more attentive and caring parents.

As opposed to Emma’s story, here’s an example of what happens in a good, low-wage job: A young mother in our study worked as a cashier. She was in the last months of pregnancy so standing through an eight-hour shift was becoming increasingly difficult. Her boss, on his own initiative, gave her a stool to sit on and let her take breaks as needed. “There were strict rules at checkout,” she told us, “you cannot sit down, but he broke the rules for me, and that mattered.”

The difference between a bad job and good job in large part depends on the culture of the workplace—how the employee experiences being at work. The good news is that what appear to be simple, common-sense business practices (providing autonomy, flexible schedules, supportive supervision) can have a powerful, positive impact on workplace culture and the well-being of workers’ families.

Here’s an example of a good workplace culture: A hair stylist told us about receiving a phone call with news that her baby was sick and needed to be picked up right away. She still had three clients on her schedule for the day, but her boss said: “Go, of course. Family comes first. We’ll figure this out.” That’s what respect, support, and flexibility look like.

The simple act of a humane, empathic business decision can lower an employee’s stress and promote physical and mental well-being. Small act; big effect. Employers, take notice: If you create a workplace that honors work, that respects and supports the people doing it, then your employees are likely to be more productive.

“The simple act of a humane, empathic business decision can lower an employee’s stress and promote physical and mental well-being.”

Consider Linda’s story: Linda was a shipment packer at a plant that manufactures candles. One day her boss asked, “I’m getting requests from customers who want you to pack their orders. What’s going on?” Linda explained that she had been inserting notes and sample candle scents in her clients’ packages. Her boss was pleasantly surprised and asked her to train her co-workers in her unique approach to customer service. She was given an award for innovation and a promotion. Linda reported that she felt respected and supported—she said work was fun.

When researchers and policy makers talk about working parents, they usually mean working mothers. The social science literature gives much more attention to how mothers’ work affects children. Many of us share a cultural bias on this issue: We believe that the care of children is largely mom’s work, so mom’s care is more important than dad’s. That is incorrect.

Dad’s work has just as great an impact as mom’s work on a family’s well-being. The working fathers in our study who had a greater degree of control over how they did their work were more eager to engage with their infant children upon arriving home from work. Those children enter the first grade with more advanced social skills and fewer behavior problems, as compared with children whose parents felt unsupported at work.

Dads’ relationships at work play an important role too. Fathers with strong, positive co-worker relationships were likely to be more engaged as parents. They also reported having warmer interactions with their kids. Peter, a working dad who participated in our study, explained how bonds of friendship at work directly supported him as a new dad. When his son was born, Pete’s co-workers each donated a day of their vacation time so that he could be at home for the first week of his baby’s life. “They always have my back; they’re like family,” he said. “I couldn’t ask for a better group of guys.”

It’s long past time that all of us correct for the bias that causes us to diminish, or ignore, the role of fathers in early parenting. Fathers are spending more time caring for children than in past generations. This is a positive development. It follows that what fathers experience at work will have increasing significance for their kids’ cognitive and social development.

A working parent – a mother or a father – who feels respected and valued at work is a more caring and responsive parent. And the emotional and psychological benefits of working in a supportive workplace are passed on to the next generation—to the young children of those working parents.

5. A good job for parents gives children a head start.

Research demonstrates that providing support for children in their early years—healthcare, day-care, pre-school—has a long-term positive impact on their physical and emotional development. Our research confirms this finding, but also identifies another early intervention that promotes healthy outcomes for children: a workplace that supports the well-being of their parents.

“The return on the adoption of worker-friendly business practices can be calculated in dollars and cents.”

Much attention and debate regarding workplace practices have focused on paid leave and flexible scheduling. These are essential policy initiatives. They focus on giving workers time away from the job. But I argue that addressing the quality of work life, on the job, is as important as providing time away from it. Simply put: When an employer respects the basic human needs of working parents, those workers respond more effectively to the needs of their children, and those children are more likely to thrive. The inverse is also true.

Investment in workers and their families must begin early, during pregnancy and the first year of life. For example, it is well established that high levels of prenatal stress impair fetal development. A hostile workplace creates a risk of grave harm to a pregnant worker.

When I present my findings to CEOs and senior managers in the corporate sector, the conversation tends to follow a predictable script. CEOs wonder foremost about the cost of adopting these practices and what their return on investment would be. These are fair inquiries. Most of my recommendations require modest expenditures related to organizational development: teaching and empowering supervisors to support parents, developing creative ways to give workers some autonomy, and improving communication. The return on the adoption of worker-friendly business practices can be calculated in dollars and cents: increased productivity, creative problem-solving, greater employee loyalty and retention.

To listen to the audio version read by author Maureen Perry-Jenkins, download the Next Big Idea App today: