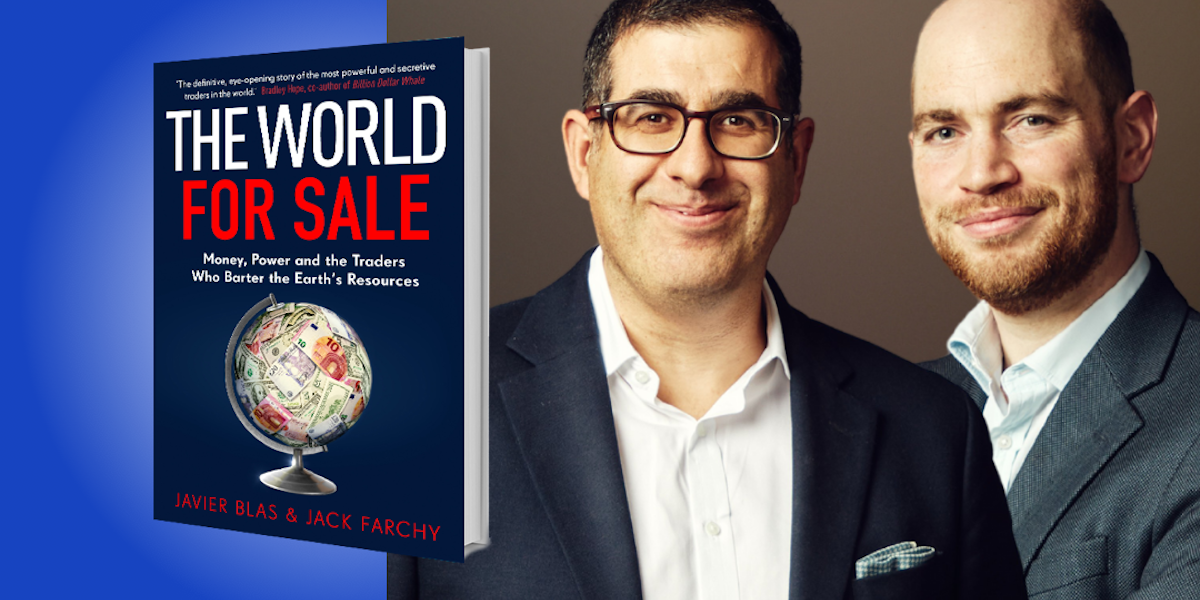 Jack Farchy is a senior reporter covering natural resources for Bloomberg News. Javier Blas also reports for Bloomberg, as chief energy correspondent. Previously, both Jack and Javier were on staff at the Financial Times, where they co-founded the FT Global Commodities Summit, an annual industry conference.

Below, Jack and Javier share 5 key insights from their new book, The World for Sale: Money, Power, and the Traders Who Barter the Earth’s Resources (available now from Amazon). Listen to the audio version—read by Jack and Javier themselves—in the Next Big Idea App.

Extraordinary political power is concentrated in the hands of a few commodity traders. The companies that buy and sell oil, metals, and food have shaped the course of history, particularly over the last 50 years. That’s because commodities are, for many countries, a hugely important source of cash. And they’re also strategically important—a government that can’t ensure supplies of energy, or of food, will fall very quickly.

During the Libyan civil war of 2011, a group of rebel forces rose up against the dictatorship of Colonel Muammar Gaddafi. But the rebels had a problem—despite Libya’s oil wealth, they were running out of fuel, because Libya’s refineries were in the part of the country still controlled by Gaddafi.

And then one day a man flew into the country who would change the course of the war. Usually turned out in an elegant suit, he was the kind of man you’d expect to see on the refined pavements of Mayfair rather than in the bombed-out streets of Benghazi. He was Ian Taylor, boss of the world’s largest oil trading company, Vitol.

“For all the talk of an energy transition away from fossil fuels, the old economy can still be a very profitable place to operate.”

With a handshake, Taylor agreed to supply Libya’s rebels with $1 billion of fuel—to be paid back after they had won the war. It was an astonishingly risky bet, but a shrewd one: Within a few months, the rebels had routed Gaddafi and taken control of the country. Without the gasoline and diesel supplied by Vitol, the war would almost certainly have ended very differently.

2. The rise of the free-market economy has made some people extremely rich and powerful—and they’re not all people you’d expect.

Over the last 50 years, three big economic revolutions have led to increasing power for commodity traders:

Thanks to those waves, commodity trading became a very profitable business. In the decade leading up to 2011, during the China-led commodities boom, the combined profits of the three largest commodities traders—Glencore, Cargill, and Vitol—were bigger than those of better-known giants of global commerce, such as Apple and Coca-Cola. And it’s not just that the profits were big; in most cases, the traders were owned by just a few key employees, or one family.

“There’s a lot of skeletons and many of them, most of them, will never be surfaced.”

Commodity traders straddle the old economy and the new. They are busy investing in metals like cobalt and nickel that are used in electric vehicles, and they trade electricity to profit from the green revolution that’s beginning in many countries. But they still make the vast majority of their profits from trading fossil fuels—in particular, oil.

Surprisingly, the COVID-19 pandemic provided an enormous profit-making opportunity for oil traders. In the early days of the pandemic-related lockdowns, oil demand was collapsing at the fastest rate in modern history. Within a few weeks, the price of oil would do the unthinkable and briefly drop below zero. Glencore, the world’s largest commodity trading firm, stepped in, buying oil that nobody else wanted and storing it on a flotilla of enormous tankers, some of them larger than the Eiffel Tower.

A few months later, with oil demand recovering, Glencore unwound the trade, delivering oil to buyers in China, South Korea, and India. In some cases, it had doubled its money. By the end of the year, it had registered trading profits of more than $3 billion—the best year ever for its oil traders. And Glencore was far from alone: Vitol, which is owned by just a couple hundred employees, made about $3 billion in 2020. Several other oil traders had their best years ever. It was a reminder that for all the talk of an energy transition away from fossil fuels, the old economy can still be a very profitable place to operate.

4. In the parts of the global economy where there is no regulation, bad behavior flourishes.

For a long time, commodity traders have escaped regulation by operating in the most opaque corners of the international financial system. The commodities they transport are often found on the high seas, beyond the scope of any national regulator; they typically trade through shell companies in offshore jurisdictions, and the traders have based themselves in places like Switzerland and Singapore, which are famed for their light regulations. As a result, many traders have been able to put aside morality and the law to turn a profit.

“It’s time for the commodity traders’ existence in the shadows to come to an end.”

One such notorious trader was Marc Rich, who was indicted on charges of tax evasion and trading with Iran, before fleeing the U.S. for Switzerland. Rich was ultimately pardoned by Bill Clinton on his last day in the White House.

More recently, commodity traders have come under investigation or pleaded guilty to market manipulation, bribery, and corruption. And many in the industry believe there’s more bad behavior that will never be uncovered. The chief executive of a big oil trader told us, “There’s a lot of skeletons and many of them, most of them, will never be surfaced.”

5. You ought to understand where your morning coffee comes from.

The business of commodity traders touches all of us. The coffee I drank this morning was shipped by a commodity trader; so was the cobalt in my smartphone’s battery; so was the cotton in my T-shirt. And yet most people know remarkably little about them and how they operate. And it’s not just the general public that doesn’t know much about commodity traders—neither do governments and regulators.

One reason is because commodity traders are mobile—they just need a desk and phone to do their work—and so they have gravitated to locations where there’s little scrutiny. In Switzerland, where many commodity traders are based, it was legal until 2016 to pay bribes to foreign businesspeople, and the bribes were even tax deductible as business expenses.

It’s time for the commodity traders’ existence in the shadows to come to an end. Governments should be better informed about what commodity traders are doing, and regulators should be empowered to go after them when they behave badly. And that starts with all of us paying more attention to them.

To listen to the audio version read by Jack Farchy and Javier Blas, download the Next Big Idea App today: