Remember That Everyone Is an Idiot, and Other Tips for a Creative Life 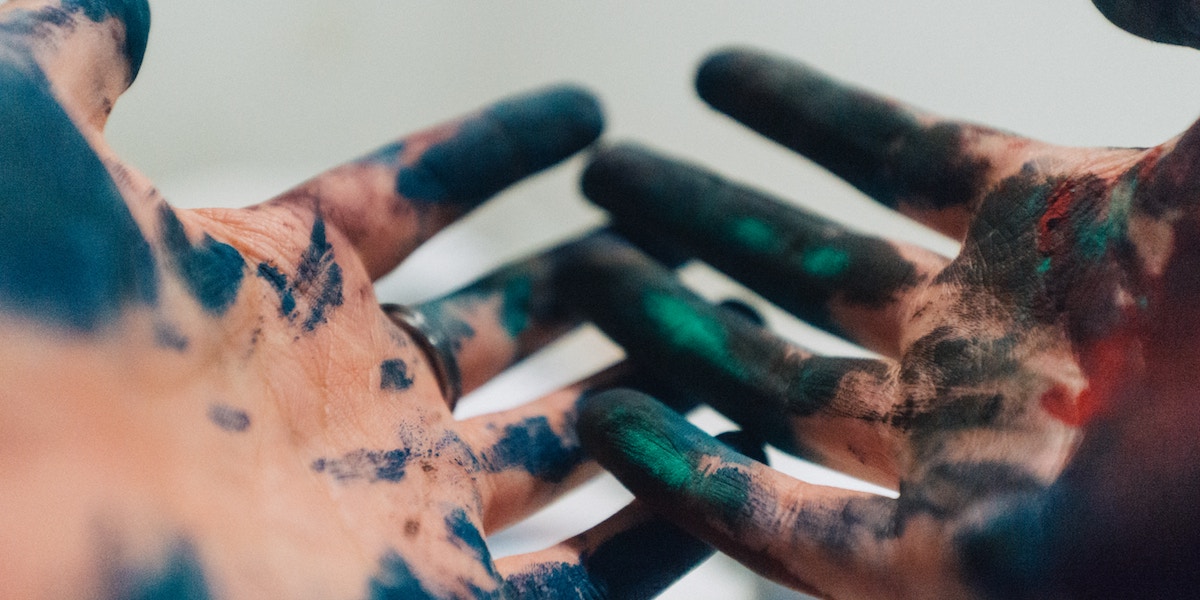 Adam J. Kurtz is a designer, artist, and author whose work has been featured in NYLON, PRINT, VICE, BuzzFeed, and more. His first two books were published in over a dozen languages each, and his latest is titled Things Are What You Make of Them: Life Advice for Creatives. He recently joined Heleo’s Editorial Director, Panio Gianopoulos, to discuss why you can’t be brilliant at everything, and how to survive life as a creative.

Panio: How do you define a “creative”?

Adam: To me, a creative is anyone who makes anything. Creatives are painters or sculptors. Then you have graphic designers, art directors, everyone in advertising and marketing. Then you have writers and literary creatives.

I also think “creative” encompasses anyone who uses creative problem-solving in their day-to-day [lives], which can be a chef, a stylist, a photographer, a tech entrepreneur. Really anyone who makes anything at all is using that part of their brain.

This is not a how-to book for Photoshop. It’s really about getting over yourself. Sometimes it’s a little bit more abstract, and sometimes it’s as blunt as Chapter Five, “How to Get Over Comparing Yourself to Other Creatives,” which we all do.

Panio: Let’s get into that, because that’s something that everybody deals with, even really successful people.

Adam: Especially really successful people. I feel like as soon as the stakes are higher, you’re like, “Well Selena Gomez has more followers than I have, so…”

Panio: I just said that this morning.

Adam: No matter how successful you are, you’re always going to see someone else’s book deal, endorsements, sponsorship. Who has the best blurb from the most prestigious person? Who’s doing TV appearances versus radio? You’re constantly comparing yourself to other people.

I have these common-sense reminders of how to get over that. Count your blessings, celebrate with others, and find inspiration in other people’s success.

“Count your blessings, celebrate with others, and find inspiration in other people’s success.”

Panio: I like that the advice is common sense, but it also smacks people around a little. Like, “You are kind of an idiot.” What do you mean by that?

Adam: Everyone is kind of an idiot. One, you can’t be good at everything, that’s impossible. Even being a brilliant scientist or very successful author on a specific topic, you may still be completely out of touch on something else.

And three, really successful people live in a sort of bubble world. We all watched Hillary Clinton try to use a metrocard. Bernie Sanders thought the MTA still uses tokens. These are objectively brilliant people who are amazing at some things and kind of an idiot in other things. I think it’s important to remember that everyone is an idiot—that is comforting to me.

Panio: You also say that you will hate your work.

Adam: Oh yeah. I guarantee that there is something you’ve made that you just hate, but at one point you thought it was your beautiful baby. I always imagine myself in The Lion King, lifting Simba like, “My baby! Look at this new thing I’ve made!” Then one week later, it’s “I hate this baby, throw it over the cliff. I got a new baby, it’s way better.” Because you’re always growing and getting better at what you do, and the better you get, the more you realize that you knew nothing before.

“You’re always growing and getting better at what you do, and the better you get, the more you realize that you knew nothing before.”

That’s just the nature of being any type of creative person, anyone who makes anything. If this sounds at all relatable, then now you know what I mean by “creative.” It’s that personality type where you see beauty in the world. You don’t always know how to replicate it yet, but as you get better, you get closer. And as you get closer, you realize that everything you’ve done in the past is a little bit bad.

Panio: And that strain of dissatisfaction is something that runs through all of human history. That’s why some of the most famous thinkers seemed so miserable, because they carom from idea to idea. “This new one, this is the great idea, the one that’s going to save me.” Actually, you just adapt, and then you want the next thing.

You’ve got a design background, right?

Panio: There’s this thing where the idea is always so good in your head, and then when you execute, it’s [never] quite right.

Adam: I don’t think that our technical skills can ever really catch up to where our brains are. Our brains are amazing, and inspiration is everywhere. As far as I know in the history of humanity, we have never replicated a blue sky. No one’s built an ocean before. These are objectively beautiful things that we admire and have been inspired by.

Panio: I thought it was interesting when you talked about being honest, and where your inspiration comes from.

Adam: This was in response to a lot of what we’ve seen in the last year, where there’s a lot happening in the world, and as creative people, we want to use our power to do something. As soon as something happens in the world, 15 people are like, “Click here to buy my t-shirt, 10 percent of the profits go to (whatever).” That’s bullshit. 10 percent of the proceeds is nothing, and people who are buying your t-shirt should just be donating money directly.

When I talk about being honest, it’s, “Are you actively trying to help, or is your intention to self-promote and profit from tragedy?” There are people who profit from tragedy either directly or indirectly. A creative person who has not yet acted, but really wants to act in light of something that’s happening, needs to sit down and decide, “Why am I doing this?” If the intention isn’t pure, maybe don’t do it.

“As far as I know in the history of humanity, we have never replicated a blue sky. No one’s built an ocean before.”

Especially when you’re the type of person who has this compulsion to constantly be creating, and you’re jumping from idea to idea, project to project. You don’t spend enough time thinking. You’re thinking about ideas, you’re thinking about execution. You’re not thinking in a broad sense about who you are as a human person. We just forget.

Panio: This creative compulsion though, is it possible to analyze it out of existence?

Adam: If I could analyze my compulsion out of existence, I would be a happier person. I don’t think that’s possible, but being aware of what you’re doing can slow you down enough to steer you in the right direction.

I didn’t start making things to turn a profit or to be an entrepreneur or to have a career. I make things because that’s just who I am. And I will keep doing that until the day I die, whether it’s selling it or not.

Panio: Does the profit motive trouble you?

Adam: No, I have no problem with people generating profit. Creative people need to live. When I speak to students, I always talk about getting over the idea of selling out.

Panio: I spoke with Jeff Goins about this as well, and he says the same thing: “You’ve got to get over thinking you’re selling out.”

Adam: There’s no such thing. “Selling out” is such a misnomer. I’ve worked with brands like Pepsi and Adobe and Microsoft, and I have remained myself through those processes, and usually, that’s what people want from you. They want you to do what you do.

I have never felt like, “Oh God, I’m selling out now.” Instead I have felt like, “Wow, I’m gaining a platform. I’m subverting corporate funds to my own personal gain.” That’s the punk, DIY way of re-contextualizing that scenario. I think creative people should make money. I want to pay creative people to do what they do.