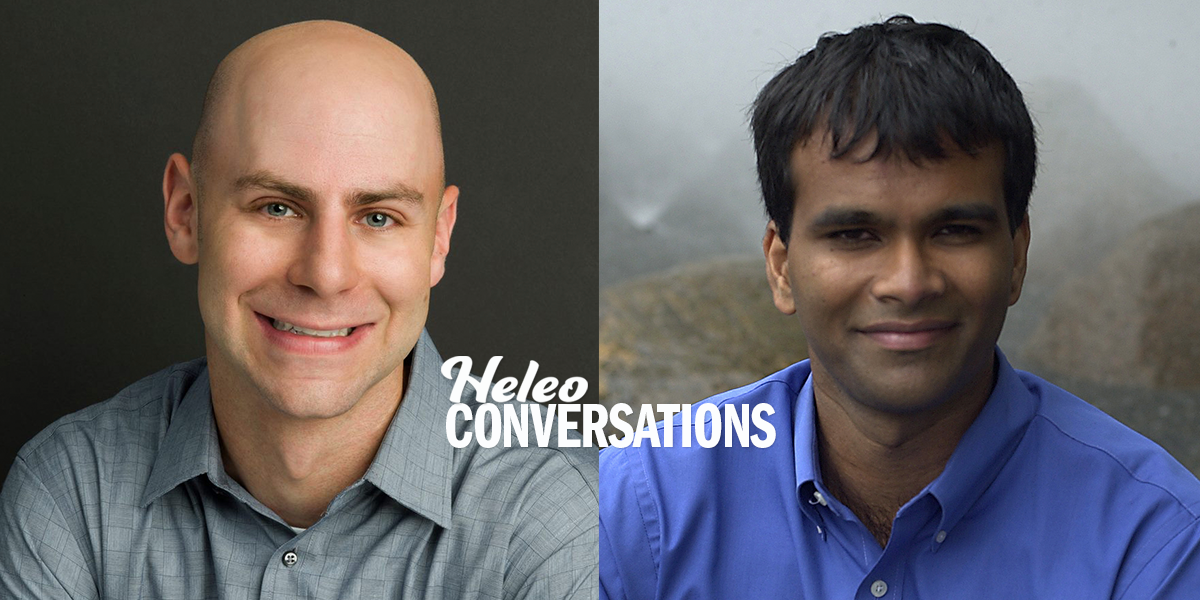 Adam Grant, professor at the Wharton School of Business and author of Originals and Give and Take, recently sat down with Sendhil Mullainathan at the prestigious Aspen Ideas Festival. Mullainathan is a Harvard professor, well-known for co-authoring Scarcity: Why Having So Little Means So Much. He also experiments with machine learning in a startup called ideas42.

Adam Grant: Since you live in the world of ideas, I thought it would be fun to talk about where you get your ideas.

Sendhil Mullainathan: Oh, yeah, that’ll be a lot of fun. After I finished Scarcity, it’s one of the things I spent a lot of time trying to figure out, because as an academic, you finish one project and what you really have finished is one out of ten things that you’re working on, so you get to change course just a little. You’re like this big ship that can only move a little bit. But with the book, it was the only thing I was doing, so when I finished it, I had nothing to do.

I woke up one day and I literally had nothing to do and so I asked myself  “What do I want to do?'” I think the best thing I did was, instead of diving into working on anything, I literally took six months to just read. I judiciously didn’t choose to work on anything. And that made all the difference. I realized how little time I’d spent renourishing the basis of things that you get ideas from. You’re tapping the pool but you’re never filling it..

Adam: So were you deliberately reading about certain topics that you wanted to pursue or did you just follow the things that you were curious about?

Sendhil: I went out of my way to be contrarian in my reading. Normally, you read the things that are easy to read, which then means you read the things that you already know pretty well and so you’re climbing the same mountain again and again. For me, it was helpful to start reading totally new stuff. And since I was a computer science undergrad, I wondered, what happened in this field? Why don’t I go back and start reading it?

It’s hard to be a technical person if you haven’t been in it for 20 years and you don’t remember any of it. That’s the moment when I realized, if I was an intellectual contrarian, I would have just said, “Ah, well, whatever,” and moved on because the first weeks were just painful. It was pointless. It was unrewarding. It felt like I was going nowhere. It was like being in school again, yet somehow that was what was needed to get to the other side.

Adam: You clearly missed the point of becoming a professor, which is to never have that experience again.

Sendhil: You know, I spent a lot of time wondering why we have tenure. Do you ever wonder about this? I kept thinking, “This must be the point of having tenure.”

Adam: So you can experience the pain of being a student all over again.

Sendhil: Yeah. If you’re only going to work on things that other people find good or rewarding in the short run, then what’s the point of academic tenure? But if you’re going to work on things that people think, “It’s not obvious that’s interesting, it’s not even obvious that’s good,” and you take two, three years, where everyone’s like, “What’s that guy been doing?” that’s what tenure is for.

Adam: I always thought about tenure as providing intellectual freedom, obviously important if you’re, let’s say, a political scientist. You’re going to argue for something unpopular or maybe even dangerous. You interpret it as intellectual freedom in a different way, where you can say, “I can take now a big risk because no one can fire me.”

“All of this excitement about poverty is improving our knowledge base and I think that as that knowledge improves, then we’ll start seeing creative solutions down the road.”

Sendhil: That’s right. It’s not just political freedom. It’s also job security. If we’re going to do the kind of things that people without job security do, then why give us job security? Then we might as well be evaluated every five years.

I’ve been telling my students when they get tenure, “At least once a decade, you better work on something where people will say, ‘Oh, that was really a pointless thing.'”

Adam: You mentioned that you’re now interested in headwinds and tailwinds. I’m assuming not the weather kind?

Sendhil: A friend of mine was saying, “You want to be at a place where what they value most is what you do,” but then he said something interesting psychologically. He said, “And when you’re at that place, you might not even notice it because being at that place means you face no headwind.”

Adam: Is this something that you’ve experienced?

Sendhil: I’ve experienced an enormous amount of good fortune of this variety just because of how I’ve grown up. I’ve gotten lucky in so many ways. But it’s easy to think, “Oh, I had bumps in the road and I persevered through them and I had challenge.” But you never really faced the constant and persistent headwind of being poor.

Adam: What do we know so far about how to help somebody in poverty either pedal faster against one of these or even reduce the headwind?

Sendhil: If we’re honest, I think a lot of people want the research on poverty to produce big solutions, but the biggest wins we have right now are in understanding it. I think the best solutions are these programs for the very, very poor around the world that have a few features and seem to work pretty well. There are things like I give you a bunch of cash and then I give you a means of earning a livelihood, like a cow or a rickshaw.

Those seem to work pretty well but in terms of, if this were a drug, we are far from having anything like a cure or vaccine. All of this excitement about poverty is improving our knowledge base and I think that as that knowledge improves, then we’ll start seeing creative solutions down the road.

Adam: I would love to know how we can intervene with children early and help them learn to overcome these kinds of major obstacles that you study.

I spent my whole career studying adults and I think the impact we can have with kids is often much greater. I know you said there’s no magic bullet, but if you were going to place your bet on one idea that’s promising, where are you most excited about in that space right now?

Sendhil: We have one set of results but it’s not very young children. It’s fourteen-year-old kids on the South Side of Chicago and it’s evaluating a program first done in schools and a very similar program that’s now being done in jails.

The program is called “a ball in the fist.” This is an example. You take pairs of kids. I give a ball to you and then the other kid and say, “Okay, try to take the ball from Adam’s hands, try to get the ball from him,” and the kids start wailing on each other, they can’t get the ball, or sometimes they do. Then I say, “Okay, did you think about asking for the ball?” The kid’s like, “No, he wouldn’t have given it to me.” Then I say, “Adam, if he had asked, what would you say?” And you’re like, “I’m not a sociopath. I would’ve given him the ball.”

The idea is to get these kids to think a little slower, to question their own assumptions. Now, this seems very philosophical but across these three evaluations, you see enormous effects with these South Side kids on arrest rates, on chances of ending up back in prison over the next year, and these are very large RCTs [Randomized Control Trials], around a thousand people in each, and so I think there is something to this.

What it’s got to be is we don’t actually teach that much thinking. The reality is when you’re middle class, whether you think badly or poorly, you’re going to have all these guardrails that just push you along. But when you’re poor, thinking well really has very high returns. I think this is an example of a program that improves thinking a little bit.

Adam: I love the idea of teaching people of all ages to stop and question their assumptions, and just the simple skill of asking. I feel like if more people were comfortable doing that, we would be able to solve a lot of problems.