The Small Behaviors That Create Excellence at Work 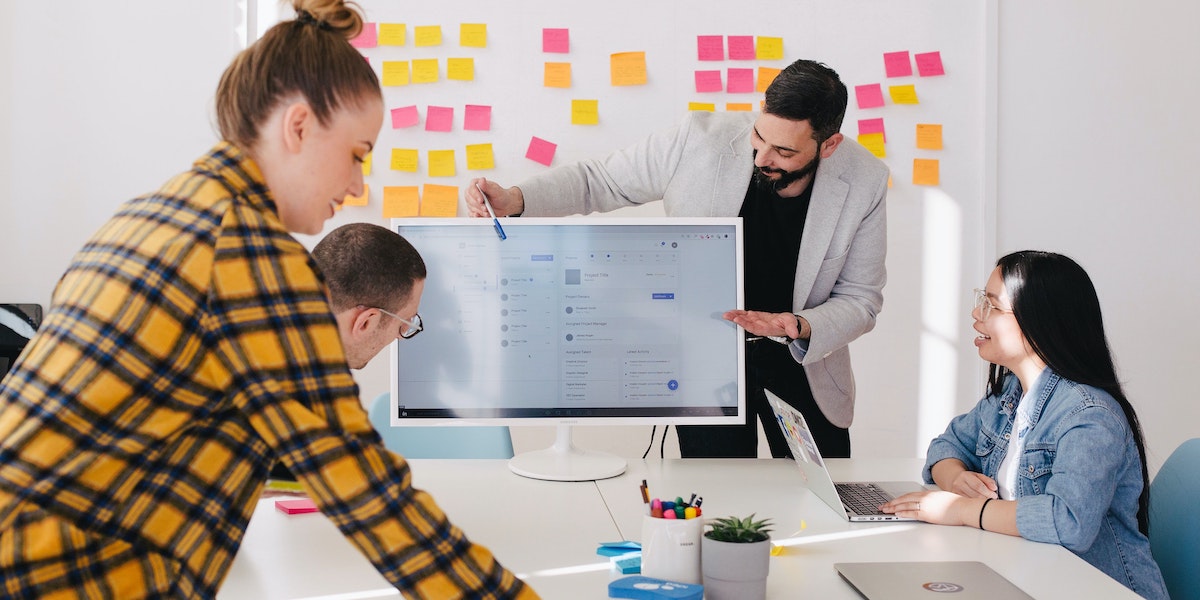 Tom Peters is a leading business mind and the bestselling author of sixteen books, including In Search of Excellence (with Robert H. Waterman, Jr.), which is often cited among the best business books ever written. He recently joined Caroline Webb, CEO of Sevenshift and author of How to Have a Good Day, to discuss the timeless words and gestures that create excellence—and give you a serious edge—while on the job.

Caroline: So what was it that made you write [The Excellence Dividend] now, as opposed to ten years ago?

Tom: The story that I always like to tell is the time that I was flying from Albany, New York, to Baltimore-Washington International on Southwest Airlines. The pilot was running toward the gate from a prior plane that had arrived late. There were six [people in] wheelchairs at the gate, and he turns to the woman in the front wheelchair and says, “Would you mind if I rolled you down the jetway?”

That, Caroline, is unmitigated, pure excellence to me—it makes the hair on the back of my neck stand up. The former president of Southwest, Colleen Barrett, has said, “We hire people based on listening, caring, smiling, saying thank you, and being warm.”

Years ago, I was talking to a Starbucks regional manager, and I had just come back from Dammam in Saudi Arabia. I said to this woman, “What in the hell is going on? The people in Starbucks in Dammam smile just as much as the people on Charles Street in Boston.” And she said, “We hire people that smile. The ones that smile the most, we promote.”

Those differentiators are going to [bring you success] for quite a while. There may be a day when 97th generation artificial intelligence can push the wheelchair down the jetway, but I think we’ve got a little time.

Caroline: A long time ago, you coined the phrase, “People first”—the idea that the job of a leader is to create a culture where people come first. And you are maintaining that even more fiercely as we think about what you call the “tech tsunami.” What turned you on to that so long ago?

“The job of a leader is to create a culture where people come first.”

Tom: When we started working on [our 1982 book, In Search of Excellence], my co-author Bob Waterman and I were in San Francisco. We were looking for good companies, and there was an interesting upstart 30 miles down the road called Hewlett-Packard. Bob said, “Why don’t you see if you can set up an appointment with John Young,” who was the president. So I go to a phone book, look up the number, and call Hewlett-Packard. I say, “Can I speak to John Young?” About 15 seconds later, a gruff voice comes on: “This is John Young, who is this?”

It was a “holy shit” moment. You could have a large institution and not run it as a family business.

Caroline: Yeah, [but everybody treated] each other like humans.

Tom: And that meeting was really the life changer, when he told us about the HP way—managing by wandering around, or MBWA.

I write about a Nordstrom woman a little bit—she said that when she was a store manager and everything would go to hell in a handbasket, she would get up and wander the store for 20 minutes.

Caroline: Yeah, it could be a deep one-on-one conversation, or a huge, extroverted chat, but that sense of reconnecting to what your organization is about [reminds you] of the whole point of your work.

Technology is hugely enabling, but it’s also going to dramatically change the future of work. What advice do you give a manager who is trying to keep his or her workforce excited, motivated, and not terrified that they will lose their jobs?

Tom: I think every leader has a moral responsibility to make [their] people better prepared when they walk away, whether they work for [that leader] for two months or ten years.

Caroline: I agree. If we think about human strengths as opposed to strengths of robots, it’s about empathy. It’s creativity, innovation, and wisdom. We are going to need managers who know enough about the human mind to elicit those human strengths from the people around them. It’s an imperative that has long existed—you wrote about this in 1982.

Tom: Well, the difference is that it [used to be] a lovely option for getting ahead. Now it’s a survival requisite.

Caroline: Leaders [need to] understand what people truly find rewarding and motivating, which is a sense of competence, autonomy, purpose, being treated fairly, being included, and being respected. It’s not that hard—you just need to work out, “Okay, well what can I do on a tiny basis from day to day, from minute to minute, that [makes] people feel rewarded in that profound, intrinsic way?”

You use the phrase “fierce listening.” Why is listening so important?

Tom: “Fierce listening” comes from Susan Scott. I also found a wonderful book from the former U.S. Secretary of State, Dean Rusk, [where he writes,] “The best way to persuade someone is with your ears.” And it makes perfect sense. All this [academic] literature says, “The reason that 9 out of 10 sales calls fail is because the salesperson talks instead of listens.”

“The best way to persuade someone is with your ears.”

I was in the UK, and I picked up Richard Branson’s management book. The entire first section, 150 pages, is called “Listening.” One word. And one of the things I remember him saying is, “We have eight traits associated with effective leadership at Virgin, and seven of those eight traits are based on listening.”

I was having an interview with somebody in Amsterdam. The interviewer did two things: she nodded her head all the time, and she took notes. And I said to somebody, “If she’d gone on for another ten minutes, I would have admitted to mass murders that I haven’t even committed!” Because she’s looking me in the eye and taking notes, and she’s saying, “Everything you say is of critical importance to me.”

Caroline: On the science side, it is inherently, deeply rewarding to be listened to. It sparks all sorts of feelings of pleasure and self-respect that we know make an enormous difference to people’s ability to think clearly. It lowers people’s stress levels, and we think better when we’re not stressed.

Tom: You can say these things that sound soft, but in the age of advanced neuroscience, there’s science behind it. There isn’t anything soft about it in terms of its impact.

Caroline: Absolutely. You make someone smile by really paying attention and listening to them. And asking real questions, not just pausing to reload your answers.

Tom: Well, a guy named Dave Wheeler said, “The four most important words in an organization are, ‘What do you think?’”

Caroline: Oh, I love that. And [with that in mind,] you’re more likely to reach for it in the heat of the moment, when you realize that you’ve been taking 90% of the airtime. You can catch yourself and say, “I realize that I’ve been talking a lot. What do you think?”

Why is “thank you” so important and underused?

Tom: “Thank you” for small things is a hundred times more powerful than “thank you” for big things. In my last book, my epigraph was from the American statesman Henry Clay. It’s something like, “Courtesies of the small sort are the ones we take to the grave.”

I had a friend one time who, because of his background, had problems saying “thank you.” He was in a fundraising event, and I said, “Look, just do this for me: Send out thank you notes. You will get so many wonderful responses, [you will just have to do it more often in the future].”

Caroline: You’ve become so adept at labeling the small, everyday behaviors that we can all embrace, which has shaped my work enormously. The great things that a company might achieve are built on these small, everyday things.

Tom: Absolutely. And I love Rich Karlgaard’s book, The Soft Edge. He’s right in the heart of Silicon Valley, and one of the things he says is, “When it really pays off is at a time of adversity.”

Caroline: Right, it’s like the fact that the pilot gets paid for the ten seconds when things are about to go wrong, not for anything else.

So what advice would you give a leader who’s going through a crisis?

Tom: The cheap answer is the MBWA thing. Go hang out. A lot of things will seem a lot less [awful] when you’re doing that, assuming you’ve put the groundwork in place.

Caroline: How have you handled crises in your life?

“Courtesies of the small sort are the ones we take to the grave.”

Tom: I’m not sure that I’m a good model—I go berserk and overcompensate. Some of the ways that I react to a crisis would drive an organization totally crazy. So I’m going to throw it back to you—[let’s say] you’re the CEO of United Airlines, and things have been going well. You wake up in the morning, and an employee of yours put a dog in the overhead bin and killed it. It’s the seventh time you guys have made a mistake like that. What would you do?

And also being comfortable acknowledging how terrible it makes you feel—naming the emotion and acknowledging your own skin in the game.

Tom: One thing I would add [is] don’t listen to the lawyers. I don’t mean that in some funny lawyer joke way—they’re going to tell you to couch your words, to make sure you’re not in trouble during the lawsuit two years from now. No—own up to it.

Caroline: Actually you talk in the book about the importance of saying, “I’m sorry,” and recognizing that you have blind spots. In a crisis that becomes really, really crucial, because nobody has the whole picture, and unless you acknowledge what you don’t know and what’s gone wrong, it’s very hard to find the solution.

Tom: You know Toro, the lawn mower [company], started apologizing for accidents. Their average settlement rate—this may be wrong, but it’s directionally correct—went from something like $300,000 to $15,000. And they hadn’t even been in court! It’s shamelessly true how well it works.