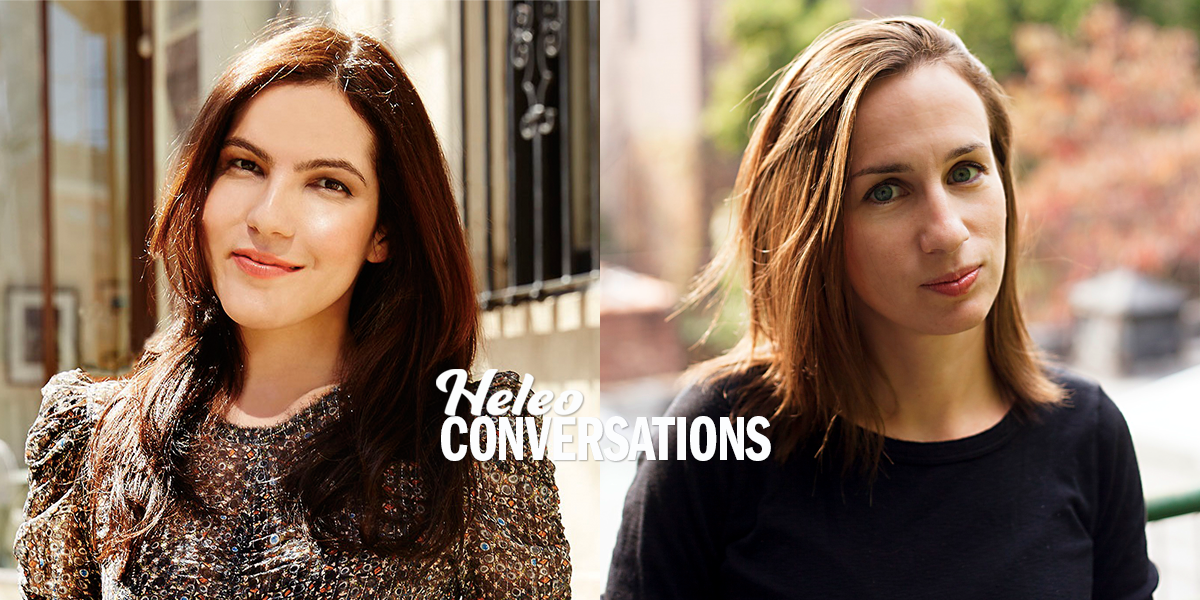 Sloane Crosley’s debut novel The Clasp, a national bestseller, is an entertaining journey that follows three neurotic, 20-something friends on a quest for an elusive necklace. She recently sat down with Adelle Waldman, bestselling author of The Love Affairs of Nathaniel P., to discuss the book and celebrate its paperback release at the Strand Bookstore in New York.

Adelle Waldman: Maybe we could start with a brief overview of your book, The Clasp?

Sloane Crosley: It’s essentially a love triangle — although it’s more of a like triangle. Three friends have become estranged post college. It’s been ten years since graduation and they’re at that stage in their life where you’re like, “Do I keep playing phone tag or do I just let this go? If I don’t go on this weekend or I don’t go to this wedding, is it done?” It’s a strange feeling: I’m either going to be there for the most important day of your life or we’re never going to speak again.

One of the three friends, Victor, is sort of a sad sack. He works for the Internet’s sixth largest search engine — that’s a company that is not going to change the world. Then he gets fired. His apartment gets broken into. Everything bad happens to Victor.  So one night, while depressed and drunk at this wedding they all gather at, he falls asleep on the mother of the groom’s bed. Batty and half crazy, she slaps him awake — and starts telling this very inappropriate and crazy story about a necklace that went missing during the Nazi occupation of France. He becomes obsessed with the idea of finding this missing necklace. And later he also decides that it’s possibly the necklace in which Guy de Maupassant based his famous short story “The Necklace.”

Adelle: Can you give a quick recap of the story?

Sloane: In “The Necklace,” the husband comes home and says to his wife, I’ve procured you an invitation to this fancy event. Instead of being grateful, the wife says what am I supposed to wear to that? He suggests she borrow jewelry from her rich friend. So she asks her friend for the most expensive thing she owns, which is this elaborate necklace. Then she loses it on the banks of the Seine after having the night of her life. They try to find it and they can’t. So she buys her friend a replacement necklace and they fall into terrible debt, spending the next ten years borrowing and stealing and trying to make it up.

One day, she runs into the rich woman in the park and she looks awful — because she’s had to take, like, eight jobs as a maid. The rich woman says what happened to you? Our heroine tells the story and the rich woman — I will ruin the kicker — the rich woman says, oh my dear, it was fake. The necklace was glass. It’s all for nothing. When I read that story, I thought, each of these characters is acting and striving, but they’ve lost sight of what’s important.

Adelle: Before then, you knew you wanted some sort of journey but you didn’t know for what?

Sloane: Yes. There are people who plot the entire thing out before they write a word. But I find that sucks all the fun out of it. That’s true for essays too.

Victor thinks that all rich people are terrible. It turns out to be only partially true.

Adelle: It’s interesting how much class plays into your book — particularly with Victor. Class is such an issue for him.

Sloane: He has a real chip on his shoulder. He talks about having a socialist tapeworm in his gut that snacks on other people’s droppings of “meditation retreat” or “humidor.” Going into the book, Victor thinks that all rich people are terrible. It turns out to be only partially true.

Adelle: Victor’s class background is similar to how you describe the couple in “The Necklace.” He went to college with the other two main characters, Nathaniel and Kezia, but he’s not from their social class.

Sloane: He’s invited to the wedding, but out of obligation.

Adelle: He is more from the lower to middle class than the upper middle class. The differences are subtle but they’re very meaningful when you’re in it. At college he’s surrounded by this strange wealth; there’s this Venezuelan girl who arrives carrying a peeling leather trunk. He arrives carrying a storage bin from Bed, Bath & Beyond. It’s just these weird differences that you notice when you’re younger.

Sloane: So many people do though!

Adelle: I find it’s a shameful thing. It’s a terrible show but I find it soothing. As soon as my husband hears the theme song, he goes running out of the house…  Tell me about the other characters.

Sloane: My sister was the the inspiration for Kezia. She works for Tiffany, in their product development department. When I used to work at Random House, we’d joke that we got paid in the ability to not have to repeat ourselves in a bar. When someone asks, What do you do, everyone’s heard of our companies. But it’s really hard to pay your rent with that. They’re not always such glamorous jobs even though they may sound like they are.

Have you ever tried to forward someone an email who isn’t in your industry about something that went horribly awry at work? The back story you have to provide is so boring!

Adelle: Although I wouldn’t underestimate that, for years I’ve wanted so badly that exact thing in a job.

I love the role that each of their jobs plays because when you’re in your late twenties, you’re concerned a lot about your job, your career, where it’s going. You’re also concerned about your romantic life and your friends. But the job tends to be the one that gets the least coverage in novels because it’s harder to write about.

Sloane: It’s hard to explain. Even in real life. Have you ever tried to forward someone an email who doesn’t work in your industry about something that went horribly awry at work? The back story you have to provide for why this is a problem is so boring!

Victor is a data scientist at a search engine, and he’s not a very good one, which is why he gets fired. There are databases he’s suppose to be logging into every day but he can’t because he doesn’t have the password. But it’s too humiliating to ask for the password because he should definitely know what it is.

Adelle: That is really painful to read — in funny ways. Kezia has a really interesting job.

Sloane: She works for an independent jewelry designer. She oversees production and deals with manufacturing. Her job is almost-but-not-quite-fulfilling. She’s the most senior employee by accident. One day she woke up and realized that everyone she was working with was 23. It’s almost based on some of my interactions with my old boss, who I love dearly, but we have a very sarcastic relationship with each other so on the page it comes off as them being terrible to each other. They do respect each other, but they also want to murder each other.

Adelle: Do you feel like there are parts of yourself in all three of the characters?

Sloane: A lot of people assume that Kezia’s my doppelganger for obvious anatomical reasons but she’s not. Victor really resonates with me. There are scenes at the beginning of the book where he’s just been fired and he only knows it’s raining because his mail is wet. He hasn’t been outside all day and that’s sad… but let’s just say it was not a stretch.