Understanding Monet: The Antisocial, Tempestuous Creator of the World’s Most Soothing Paintings 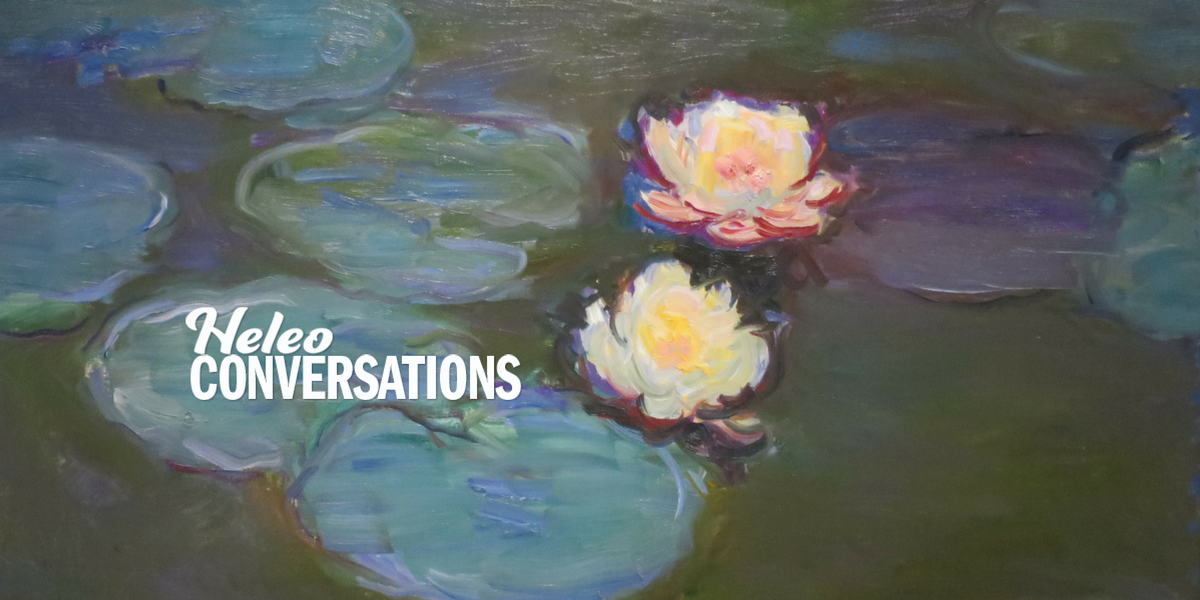 Ross King is the author of multiple critically-acclaimed, bestselling historical works, including, most recently, Mad Enchantment: Claude Monet and the Painting of the Water Lilies. Ross recently joined Heleo’s Editorial Director Panio Gianopoulos for a Conversation that reveals the tortured artist beneath the calm surface of the famously idyllic paintings. Read on for an in-depth look at the process and legacy of the man behind the lilies.

Panio: From Monet’s paintings, I expected him to be a serene, gentle figure. But the way you describe him is nothing like that.

Ross: Yes, you’d think he would be very calm and happy—the Impressionist expert at Sotheby’s from London calls Monet “the great anti-depressant” because when you look at his paintings, they’re very soothing. But, in fact, he was a tortured artist. He committed what one of his stepsons calls “acts of violence against his paintings”—slashing, burning, stomping on them. He was a tempestuous personality.

Panio: And very unsociable, right? When people wanted things from him, he could be horrified and contemptuous—like the American woman who asked for one of his paintbrushes as a souvenir.

Ross: That’s right. He was a celebrity by the time he was in his 40s. For the rest of his life, until he died in 1926, he was one of the most famous people in France.

People would come to Giverny to see the house, to peek into the garden, to catch a glimpse of the great man himself. But he wasn’t a willing celebrity. He would spurn people, particularly Americans. A lot of American painters went to Giverny in the late 19th century, hoping that some of that magic would rub off on them. But Monet rebuffed most of those advances. He didn’t take students. He didn’t like working with people.

He could be sociable with his friends. He kept a great table for lunch but, for the most part, his sociability was reserved for his circle of close friends.

Panio: Can you talk about Monet’s process of painting? It seems very unusual.

Ross: It was a very strange working process. He would go into a field with one of his stepdaughters following behind him, pushing a wheelbarrow with six or seven canvases stacked in it. Then he would set up in front of the motif that he was painting—whether it was a haystack or the River Seine or something like that—and he would begin, switching the canvases on and off his easel every seven minutes. He would shuttle them back and forth because he claimed the light changed every seven minutes.

Once, when he was painting at the Savoy hotel in London, doing his famous London scenes, the painter John Singer Sargent came to see him. Sargent described Monet’s room as filled with canvases. [Monet] would be peering out the window at the River Thames and the Houses of Westminster, and as the light changed he would frantically run around his hotel room searching for the right canvas to put back up on his easel, to continue the light effect that he had seen a day or two days before. Then of course, in seven minutes it would change, and he would start frantically looking for canvas #45…

People often associate his works with very rapid, one-take painting, but these seven minutes of light that we get, this slice of time, actually took him many weeks or, in some cases, months. He painted and repainted and repainted much like an old master. In his “Water Lilies” paintings, there are some 15 layers of paint on some of the canvases.

These shimmering images of very brief instances of time actually took him many days and weeks of work. It’s one of the great paradoxes about the way he worked.

“We have these connotations of Monet as someone who is very calm and who worked quickly and easily and efficiently. That just shows how great an artist he was, that he was able to disguise his torment.”

Panio: I find that in general to be the case with art: what seems effortless and brief takes hours or days or years to create.

Ross: That’s the magic of it. You cover over your steps and you don’t let them see the effort that has gone into it. We have these connotations of Monet as someone who is very calm and who worked quickly and easily and efficiently. That just shows how great an artist he was, that he was able to disguise his torment and that, in fact, some of these canvases took as many as 60 sessions of work.

Panio: What compelled him to start the “Water Lilies” series? Hadn’t he formally retired before then?

Ross: Yes, he retired in about 1911, after his second wife Elise died. He was devastated. He was in his early 70s at this point. He wrote to various friends and said, “I’m annihilated. The painter in me is dead.” He really felt he couldn’t go on.

A year or so later, he did attempt to paint again, but then he was diagnosed with cataracts. So he put down his brushes—and the French media reported that the great Claude Monet, the most famous painter in the world, had stopped painting.

But, a year later, he took up his brushes again. There were really two factors behind this. One was that his eldest son Jean died early in 1914—which though a huge tragedy for Monet, meant that Jean’s wife, Blanche, moved into his house. After three years on his own as a moping depressed widower, he suddenly had his daughter-in-law in the house to really take care of him, comforting and encouraging him.

The second factor was the efforts of Georges Clemenceau, the former prime minister of France, and Monet’s best friend. In the spring of 1914, he came to Giverny with the express purpose of getting Monet to paint again and said, “Why don’t you do some more water lily paintings? Why don’t you find someone who will pay you to decorate a room with them?”

That seems to have been all Monet needed. It had been about three years since his wife’s death. He now had someone living with him and helping him along. Then there was really no stopping him virtually for the rest of his life. He lived another 12 years. In those 12 years, he painted hundreds and hundreds of yards of water lilies, including these gigantic, absolutely massive canvases: six feet high by 14 feet wide, or 20 feet wide, or 42 feet wide.

Panio: When “Water Lilies” was exhibited, what was the public reaction?

Ross: Initially it wasn’t favorable. No one knew what to make of them. A lot of critics said that these huge works were an artistic mistake. There was lots of color but not a lot of solid form—light, shadows, reflections, clouds, all of these impalpable things dissolving and reforming before our eyes.

That was not the way art was going in the 1920s, because of course Cubism was at its height: solid forms and hard edges, things like that. Monet wasn’t putting any of that in these paintings. The reviews were quite harsh. Monet was dead by this point—probably fortunately.

Panio: When did the public consensus change?

Ross: In the late 1940s/early 1950s, there was a 180-degree turn in the critical evaluations of these works. Suddenly, they became very, very hot property.

All of the art museums in the United States and Europe wanted to get their hands on these huge wrap-around paintings which, for the previous 25 years, had been rolled up in storage in Giverny where no one had been looking at them. No one had been looking at them in the Orangerie [museum where they were being shown] either, because the Orangerie wasn’t part of the tourist trail in Paris. The paintings were badly lit. They weren’t really taken care of.

Since the 50s, however, Monet’s reputation for these late paintings has never dipped. They’ve been seen for decades as his greatest achievement.

By the 50s, in America, for example, the abstract Expressionists wanted to get away from Cubism. Jackson Pollock, Rothko, Robert Motherwell, people like that wanted to find a new form of artistic expression which would take them beyond what the Cubists had been doing. They wanted to look at other things.

Jackson Pollock had not seen Monet’s large laid canvases. But with his all-over drip paintings, the action paintings, he came to an aesthetic which was coincidentally very similar to Monet’s. When trying to rid himself of various other influences, he arrived at the same artistic point Monet had reached a number of decades earlier.

Panio: Did Monet worry about his place in history or did he feel secure?

Ross: He did worry about it—rightfully so, because he knew of various artists who’d had very high reputations yet after their deaths, their reputations completely collapsed. In one of my earlier books, Judgement of Paris, I talk about Ernest Meissonier, the great antagonist of the Impressionists in the 1860s and 1870s. Meissonier had a colossal reputation. After his death in 1891, no one looked at his paintings. Very few people have looked at his paintings since then.
Monet knew of Meissonier: there were comparisons made because Monet was this very vigorous painter with a big, white beard who lived in the countryside outside of Paris, just like Meissonier.

Ultimately Monet’s reputation was safe because Impressionism was such an important art movement. Monet was always going to be part of that. It was what he did with the late part of his career, however, what he was doing with the water lilies, that showed he could still push the boundaries and do adventurous, extremely ambitious works. As radical and innovative as he was in his 20s and 30s, he was even more radical and innovative in his 70s and 80s. I think there are almost no artists that you can say that about.