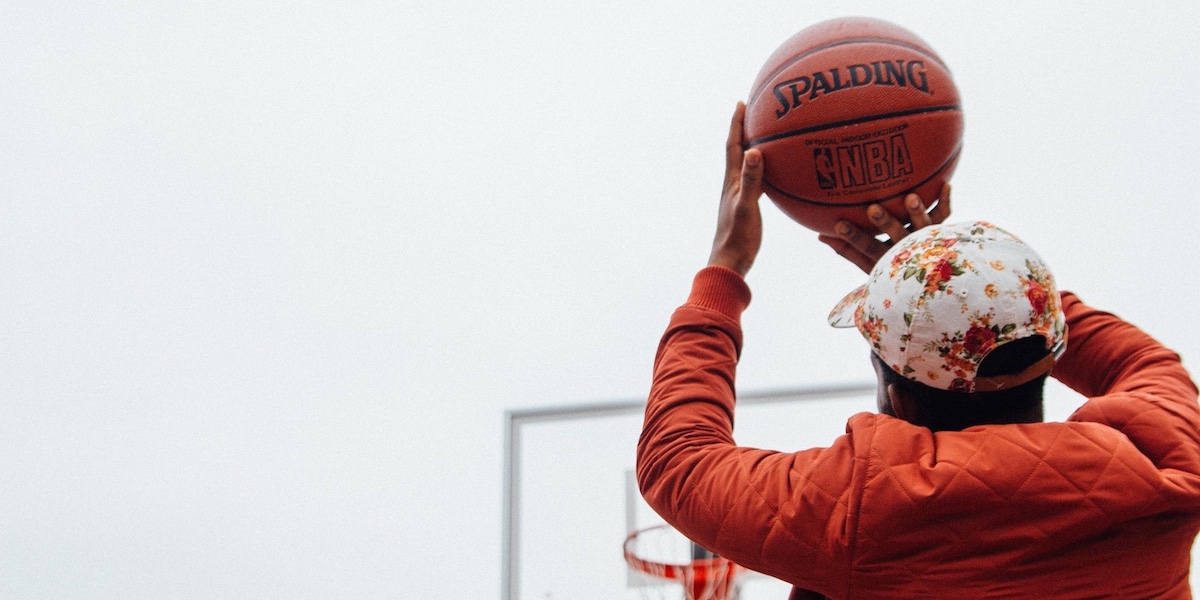 JJ Redick is a professional basketball player, a paragon of grit, and the star shooting guard of the Philadelphia 76ers. He recently joined Ryan Hawk, host of The Learning Leader Show, to talk about how he has cultivated his perseverance, parenting priorities, and adaptability.

This conversation has been edited and condensed. To listen to JJ and Ryan’s full conversation, click here.

Ryan: You’ve been around world-class athletes, coaches, performers, showrunners, you name it. If you look at those people, what are some of the common themes of those who have sustained excellence over an extended period of time?

JJ: The first thing is passion. If I look at anyone that has been successful for a number of years, they’re very passionate about what they do. Coach K is passionate about teaching, coaching, and about winning—that’s what drives him. Steve Ballmer and passion are synonymous with each other. When he was with Microsoft, he had a passion [for] building that business into one of the biggest businesses in the entire world. And now, as an owner [of the LA Clippers], he’s passionate about building a world-class organization that can win.

The biggest thing for sustained success, though, is mastering the small stuff. My favorite children’s book as a kid was The Carrot Seed. It’s a book that I read to my oldest son probably three times a week, [too]. It’s eight pages long and basically, the book says a little boy planted a carrot seed, his mom said it wouldn’t come up, his dad said it wouldn’t come up, his brother said nothing would come up, and every day, he pulled up the weeds around the seed and sprinkled the ground with water and everyone kept saying it wouldn’t come up, and yet, the kid continued to pull up the weeds and sprinkle the ground with water. And then, one day, a carrot came up.

It’s that idea of being in the weeds everyday. For an athlete, people see the 82 games we play, they see the playoffs. What they don’t see is the diligence required on a daily basis to prepare your body and sharpen your skills to be a world-class athlete. It’s the diligence to be in the weeds, but also to have passion about what you’re doing. Otherwise, the grind will defeat you.

JJ: There are all these defining moments [as] an athlete, [where] you can have that, “Oh, I’ve arrived” moment. I’ve had teammates who have “Arrived” tattooed on their bodies. It just goes against how I think. There’s never been a point where I’ve had that feeling of arriving. To me, there’s always something more in terms of skill-sharpening and getting better as a player, there’s something more in terms of being a leader.

As I’ve gotten older, I’ve applied that ethos to every aspect of my life. I’m a parent now. I don’t have much parental knowledge or experience. There’s never going to be a moment in time where I “arrive” as a parent. My own parents, in their 60s, still have to deal with us. You [realize] that there’s always something more to be learned.

Ryan: You talk about how you’re fortunate to have such great leaders in your life—Coach K, assistant coaches, [and] notably, your parents. I learned about your upbringing based on your podcast and I’d love to compare it to your son’s upbringing now. Growing up, you got hand-me-down shoes from your sisters. Now, you’ve played in the NBA for 12 years. You just signed a deal with Philly for a one-year contract for $23 million. You can provide whatever your boys need and then some.

I have to believe your upbringing helped you develop grit. [So,] how do you plan to raise your kids so that they develop grit, even though you can easily provide more than they will ever need?

JJ: That’s a great question. As a parent [with] first-generation wealth, there’s no blueprint for you. I can’t raise my kids the same way my parents raised me because it’s a completely different environment. Accountability is the biggest thing that [my wife] Chelsea and I talk about. We want two things overall. We want our kids to feel like they’re loved, and we want our kids to love other people. And if they have those two things, then everything else will sort of fall into place.

Ryan: We grew up playing all the sports, and sports certainly help develop that grit and being able to handle tough situations. You’re going to lose. You’re not going to be the best player. I went to college at Miami University in Ohio to play quarterback. I was in the same class as Ben Roethlisberger, and learned quickly that you do everything you can and sometimes it’s still not enough. It was a great lesson to learn in my formative year to help me develop grit and handle adversity.

JJ: I think that’s a great point. I’m in the middle of this book, Falling Upward, by Richard Rohr, and the essence of the book is [that] to reach the second half of your spiritual journey, you need to fail. There’s no [amount of] prompting or willpower that can get you there, beyond failing. As a parent, you don’t want to see your kids fail, but it is so necessary. Then, encouraging them through that failure and getting them to the other side is the biggest thing.

JJ: The biggest takeaway was mastering mechanics in an imperfect environment. As an athlete, that’s the hardest thing to do. If I were to go into an open gym and it was just me on the court and I shot 25 threes, I’d probably make between 20 and 23. But [in games], the pass isn’t perfect. It might not be right on the seams, it might not be right in my shot pocket, maybe my footwork isn’t perfect. So, you have to figure out ways to create these imperfect environments.

Beyond sports, it’s very rare in life that we get perfect environments. If you work in the financial field, you’ve got to factor in so many different things that happen in the macro financial world to just make one play. Adjusting on the fly, repetition, and having grit creates these mechanics that allow you to be successful in these imperfect environments.

Ryan: I had a great mentor tell me that, in order to be successful in business and life, you have to be willing to adapt to situations. You’re going to face different situations at all times in your career, and your ability to be successful is your willingness to embrace adapting to the environment that you’re in.

JJ: This [reminds me] of that Christopher McCandless quote from Into the Wild: “The joy of life comes from our encounters with new experiences, and hence, there is no greater joy than to have an endlessly changing horizon, for each day to have a new and different sun.” I love that.

“The joy of life comes from our encounters with new experiences, and hence, there is no greater joy than to have an endlessly changing horizon, for each day to have a new and different sun.”

Ryan: When you were talking to Maverick Carter, he called you an overthinker. You said that you were just so interested in information in general. Good shooters sometimes have to be unconscious—they have to be willing to pull the trigger without thinking. So, as a [self-proclaimed] overthinker, how do you balance out that [tendency] when you get on the court?

JJ: It’s a challenge for me. When I was in high school, my dad used to call me a head case. So, then, I started writing “head case” on my game shoes. It’s hard for me to turn off. When the game comes, I’m constantly quantifying things happening within a game. I find that the less I think, the better I play. I’ve gotten better at it, but you can’t change who you are.

Ryan: So how do you handle mini slumps, when they come up? This relates to people in all walks of life. You’re going to have moments where you feel like you’re doing everything right and it just doesn’t happen for whatever reason.

JJ: I probably, at this point, don’t get as worked up about a mini slump as fans or commentators or even coaches. I even have a few teammates, I know they’re trying to be helpful, but it’s almost an annoyance for them to be like, “Hey, man, keep shooting.” I’m like, “Yeah, what the fuck else am I going to do? That’s what I do.” Angela Duckworth, in her book Grit, talks about the enjoyment of the mundane. That’s essentially what grit is. For me to go into a gym and shoot hundreds of shots, it’s absolutely 100% boring. It is. I’m not going to lie. But I love it. It’s so much fun to me. Because I trust it.

“Angela Duckworth, in her book Grit, talks about the enjoyment of the mundane. That’s essentially what grit is. For me to go into a gym and shoot hundreds of shots, it’s absolutely 100% boring. It is. I’m not going to lie. But I love it. It’s so much fun to me. Because I trust it.”

Ryan: In 2008, you wrote down a list of goals, things that you wanted to do. Is that a regular practice of yours? What are some of them, now that almost 10 years have passed since then?

JJ: I’ve always written down goals, growing up. And at Duke I realized—Coach K taught me this—that you want to set goals that you can control. For example, I’ve never made it a goal to make an All-NBA team, or in college, to be National Player of the Year. These are voted on by other people.

Now, you can control smaller goals and hopefully you get those results. There are really two touch points in my life: January 1st, where I make a list of off-season goals. What do I hope to get better? Where do I find quiet time? And then, usually [starting] on December 15th for like two weeks, my wife and I talk about life goals. Every year, we’ve made a list of life goals, and some of them are super silly. Like one year, I made a life goal that I wanted to complete an arm sleeve tattoo, and I actually accomplished that goal.

Some of them, obviously, are bigger. In 2015, this was our life goal list: I get a left arm sleeve completed, which we did. Win an NBA championship, which was the year we lost to Houston in game 7 after we were up 3-1. So, we didn’t get that one. Take a great European vacation—we knocked that off the list. After three years, finally complete our Austin house, which we did. Have a healthy child. Find a home church. Get involved with a great charity in Austin. These are the things that we wanted to accomplish that year. We ask ourselves, “What is going to make our life better? Where are we going to find the most enjoyment?” And I always like to include this: “How do we include other people along that journey?”