What Surfing Can Teach You About Success 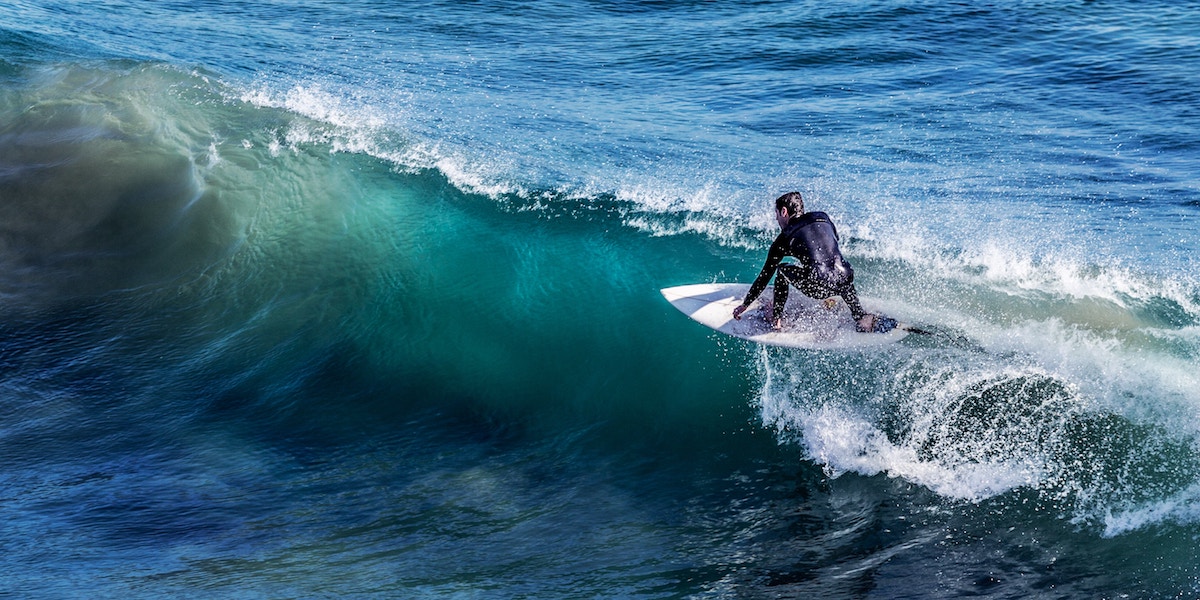 Srinivas Rao is the host and founder of popular podcast, “Unmistakable Creative,” where he has interviewed over five hundred creative people. Award-winning podcaster David Burkus recently hosted him on Radio Free Leader to talk about why working toward professional success isn’t so different from surfing, and why you need such a gritty attitude for both.

Srini: I did a lot of the things that are the check boxes on society’s life plan: go to a good school, go to grad school, get a better job. And I had this very strange situation in that I graduated not once but twice into really bad recessions.

You couldn’t plan a career getting screwed up like this. I graduated from Berkeley in 2001 right when the dot-com bubble burst, and then I graduated from Pepperdine in April 2009 when we went into what they call “The Great Recession.” The 2009 recession forever changed society at large. I realized that the idea that “Oh, the recession is over, and jobs that pay MBA students $90,000 are going to start falling from the sky,” was never going to happen again. There would be no recovery from this, because technology had fundamentally changed the world.

And now, we are in a situation where we’re being rewarded for standing out, as opposed to being rewarded for fitting in. Back in those days, if you saw a job description, ideally the bullet points on your résumé matched up with the bullet points in the job description. You were really trying to fit into that box. And now to do work that is interesting, to get opportunities, that no longer seems to be the case.

For me that never was the case, because I got fired from all of my regular jobs because I was bad at them. So my hand was forced into starting this and sticking with it. Seven years after starting a blog, we’re here with “Unmistakable Creative,” a podcast where we’ve done close to 700 interviews. We’ve produced live events, I’ve ended up being a paid speaker, and I just had this book Unmistakable come out. So I’m kind of this mismatch of writer, speaker, author, and podcaster, and I think that’s why I tell people I use the internet to make things.

“I see a lot of people fail due to lack of grit. They don’t fail, they actually quit. But then they call it a failure.”

David: Unmistakable tracks, for lack of a better term, the new life plan. You said you followed the old life plan to a tee, until it didn’t work. And you’ve replaced it with a new life plan that looks an awful lot like how one goes surfing. Where did that come about?

Srini: When I finished graduate school, I needed something to keep me from going insane. Because I realized that sitting in front of a computer all day, doing nothing but searching for jobs and submitting résumés, could become very depressing. That’s just a recipe for madness. There’s a guy named Peter Bregmen who said, “The worst thing you can do when you’re unemployed is spend all your time looking for a job.” Which is counterintuitive advice, but it made a lot of sense to me, because I was hearing stories from my classmates saying stupid things like, “I’ve applied to every job on the internet.” That’s just not efficient. And you’re not going to end up with a job you want that way.

I needed something to keep me from going nuts, so [surfing] became this outlet. It taught you how to be really present, it kind of washed away all of the troubles. When I was in the water, this job search that was so daunting and so troubling didn’t matter as much.

Surfing became a metaphor for everything in my life. And the more I surfed, the more addicted I became to it, and I think it played a big role in me deciding that, “I don’t want to go back to society’s life plan. I have no desire to succeed in the context of somebody else’s [vision] for what success looks like.”

David: I think that’s a brilliant realization. For those who have no experience with surfing, can we talk through the stages?

Srini: The paddle out is the first thing. You’re standing on shore with the board in hand, but you have to get in the water and get to a place known as “the takeoff point,” where the waves are actually breaking. We call that “the paddle out.” Nothing really goes wrong in the paddle out, but it’s a bit like starting whatever it is that you’re trying to start, whether that be an online project or a company. It’s a metaphor for the earliest phases of starting.

So you paddle out, and then you find yourself in what is known as “the lineup,” which is all the other surfers in the water. At any surf spot that’s any good, the lineup is always going to be crowded with people who have more talent and more skill than you do. So you have to be able to really compete.

Then you have what’s called “the drop,” which is this moment between when you’re paddling for a wave, and when you push yourself up on it. The drop is really all about one thing: commitment. If you don’t commit on the drop, then you will find yourself tumbling down the face of a wave. And what’s funny is, even if you commit and eat it, it’s actually better than if you don’t commit fully.

That takes you to standing up on the wave, which is “the ride.” The ride is all about mastery, because once you’re up and standing, that is when your skill is really put to the test. There you have this combination of both style and skill that come together. Then there’s “the impact zone,” which is where you’re just taking wave after wave on the head, and to me, that was a metaphor for the difficult chapters of our lives. Because if you do anything that’s hard or of great significance, inevitably you’re going to be put in a situation that challenges and tests you. And the ability to have grit in that situation, to persist, is really critical.

Finally you have the last part, which is called “the stoke.” What people who don’t surf probably don’t know is, a big part of the reason that surfers surf is not for the waves themselves, but for what you feel like when you get out of the water after you catch a wave. It’s just this incredible rush, and it makes you happier, it makes you calmer, it does so many wonderful things.

David: Your book becomes an unlikely, masterful career guide. Talk [more] about grit in the impact zone. We love to think about being gritty in these movie montages of training, where everything’s going great because you’re preparing for the big prize fight, but that’s not actually what grit is about. It’s about pushing through those times where you don’t even know when you’re going to get to breathe, because you don’t know where these waves are going.

Srini: I think that’s a pretty hilarious description, you’re thinking [of the] Rocky theme song, charging up the mountain. But grit is very much a mental thing as well. You get challenged with situations where, like you said, you don’t know where whatever you are working on is going. You don’t know whether it’s going to work out. I see a lot of people fail due to lack of grit. They don’t fail, they actually quit. But then they call it a failure.

And there is a critical difference between failing and quitting. A lot of people quit when things get hard, or the results aren’t instantly what they want them to be. I remember this guy who posted on the Facebook group for podcasters saying, “I’ve recorded four episodes, and no one listens to my show. This is all bullshit.” And I’m thinking to myself, “Are you serious?”

We live in a world that moves at such a fast pace that everybody wants to be successful yesterday. Even after you arrive at this moment that you’ve been anticipating for your entire career, the work just continues. The level gets harder, it gets higher, and you still have to persist and you still have to have grit.

“People do what’s comfortable, and as a result, they don’t get better. The only way to get better is by doing things you’re not currently good at.”

David: I had a conversation maybe two weeks ago about how gritty people assimilate being gracious for hitting the goal with a healthy dissatisfaction [for] where they currently are. Like you get to that thing, and then you’re like, “Yeah, but I can do more.” It’s indicative of that role of grit, and that role of not quitting. You get fired or rejected by a publisher—that’s failing. Saying, “This is too hard, I’m going to stop,” is quitting.

You said earlier that you end up better off if you commit, even if you tank. I think an interesting tangent to that is the role of deliberate practice. Because a lot people are doing what they think is the level of practice they need to get better, but what they’re really doing is what’s comfortable, which is not fully committing in that way.

Srini: The thing that defines deliberate practice is that it’s hard. It’s something different and outside of your comfort zone. I’ll give you an example that I’m wrestling with right now. I’ve just written a book, [and] there was a point at which the process became easy. And now I’m at this nebulous beginning of trying to make an outline [for a new book]. And I’m having the feelings again of, “How the hell is this ever gonna turn into book?” I’m now in a situation that is forcing practice, the kind of practice that will really stretch me.

People do what’s comfortable, and as a result, they don’t get better. The only way to get better is by doing things you’re not currently good at.