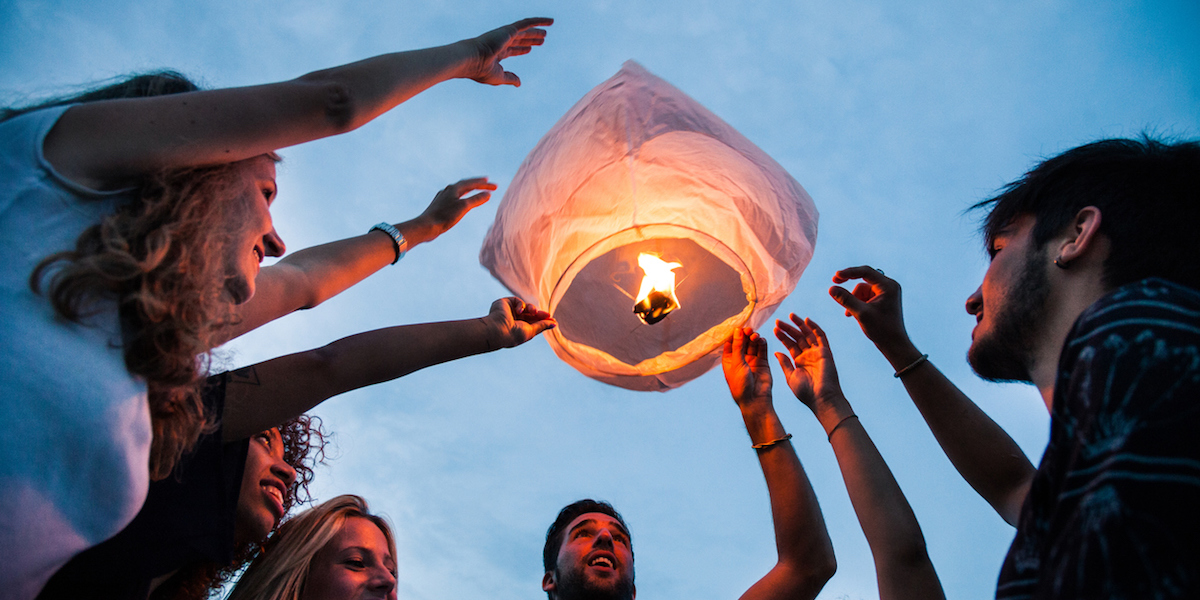 Bernadette Jiwa is a business advisor and international authority on the role of story in business, innovation, and marketing. She recently sat down with Heleo’s Editorial Director, Panio Gianopoulos, to discuss how intuition can help you make waves in a data-driven world, plus more powerful ideas from her latest book, Hunch: Turn Your Everyday Insights Into the Next Big Thing.

Panio: How do you define a “hunch”? What is the difference between a hunch and a lucky guess?

Bernadette: The thing about a lucky guess is that it’s not informed, and as I define it, a hunch is informed by something.

Panio: So when you say “informed by something,” are you thinking [of] data? Or do you notice a pattern?

Bernadette: The thing is, data is not just something we can graph or measure. Data is in a smile. Data is in the stories you hear in the street. So it’s asking great questions and recognizing patterns, with some practice.

Panio: I find that interesting, because I’m a reluctant champion of intuition. Rationally, I like to discredit it. But anecdotally, when I listen to my intuition, more often than not, it’s right. Especially around personal things, when you can’t put your finger on why you get a certain feeling until after the fact.

Is intuition a kind of human pattern recognition? It’s like your mind is an app running in the background, and you are drawing these results, but you don’t see what’s happening?

Bernadette: It’s an understanding that you develop unconsciously. I love the example that Daniel Kahneman [gives] where he says, “When I call my wife and she picks up the phone, I can tell what her mood is just by the way she says hello.” He’s obviously spent a lot of time understanding how she operates, and that’s pattern recognition.

Intuition can be flawed and also marvelous, and what’s interesting to me is [that] even scientists, whose job it is to find proofs, start with a hunch. They start not knowing for sure if they’re on the right track. People you think are really rational, like Stephen Hawking and Steve Jobs, said that intuition had played a big part in their work.

“A lot of these huge breakthroughs are based on watching other people, and seeing things not working for them. It’s very relational, not a lone person in a room being a genius.”

Panio: And intuition is connected to imagination. There’s that Einstein quote: “Imagination is more important than knowledge.”

Steven Johnson writes about the slow hunch. You see all these examples of it in the history of innovation. Someone has an idea, and it takes six, seven, ten years before they put all the pieces together. But you have techniques to progress your hunches along. How did you develop that system?

Bernadette: I looked at people who have been successful in bringing products and services to market without [having much] data, people like the Dollar Shave Club guys, and Debbie Sterling who invented GoldieBlox. All intuition-driven innovations. Sara Blakely, the inventor of Spanx, talks all the time about trusting your gut.

Panio: “Empathetic” is a really interesting one, because a lot of times we think about this person always alone, stewing, coming up with brilliant ideas. But in fact, a lot of these huge breakthroughs are based on watching other people, and seeing things not working for them. It’s very relational, not a lone person in a room being a genius.

Bernadette: The basis of an idea that flies is an idea that gets adopted by someone that’s going to use it, champion it, and buy into the product or the service. You [have to be] empathetic to what’s bothering them, what’s happening that shouldn’t be, or what’s not happening that should be. Like Sara Blakely did with Shapewear women’s underwear. The manufacturers weren’t trying this stuff on real women. They weren’t speaking to real women, so they didn’t understand what it felt like to wear that thing, how uncomfortable it was. Empathy is a huge part of it.

Panio: Do you think imagination is a skill that you can develop?

Bernadette: It’s a skill you can develop for sure. We can all be creative. If I asked you to close your eyes and imagine a genius…

Panio: I go straight to Einstein.

Bernadette: If you Google the word “genius,” that’s the image you’d get: Einstein, or Steve Jobs. You don’t get somebody ordinary, and I feel that’s a bit of a cop out for us, that we don’t think we’re capable of coming up with something great. It’s not a title we can own. If I called you a genius, you’d be really uncomfortable with that.

Panio: I feel like genius is something you earn after the fact, based on some big achievement.

Bernadette: Or on your IQ, or where you went to school, and on and on. When you think about it though, there’s genius in things like a waitress who is holding all these orders in her head, or paying attention to what different diners want. Or a really skilled teacher with a classroom of six year olds, holding their attention. We’ve got a very narrow definition of genius, and I wanted to explore that in this book.

“Get away from consuming, because you can’t consume and create simultaneously.”

Panio: One concept that stood out was that we’re always distracted by our devices, yet a lot of our great ideas come when we’re spacing out. It seems like one way to be more creative and imaginative is to let yourself be bored sometimes, just let your mind wander.

Bernadette: It’s true. Get away from consuming, because you can’t consume and create simultaneously. We’ve got to have the self-discipline. Sara Blakely tells a great story about how she extends her commute to work. She lives five minutes from her office, but she drops her kids at school, and then she drives for 45 minutes to work.

Panio: So she can think while she’s driving?

Bernadette: Yeah, that’s her thinking time. We need that. If I don’t have creative time away from other people, or distractions, I get very grumpy. It doesn’t have to be sitting meditating. It can be something like making a pie.

Panio: That really speaks to me. For a while, I felt like I was constantly consuming. I was reading Facebook, and Twitter, and the news. I was watching TV shows on Netflix, and it felt almost like an extension of work. Especially if you binge a series, right? It felt like a series of tasks, like I’ve got to watch episode seven, and eight, and nine before the new season starts. Then I backed up, and it sounds really silly and obvious, but I said, “What am I watching this TV show for?” Ostensibly it’s for pleasure, but somehow it veered from pleasure into productivity, which is bizarre and really not what TV is about. TV is a diversion.

Bernadette: If we talk about Nir Eyal‘s book, Hooked: How to Build Habit Forming Products, we are tricked into having these habits that are not healthy to us. We need to take control and trick ourselves to create habits that are useful to us.

Cal Newport has written extensively on how you can create routines and habits for yourself to block out creative time, instead of doing busy work that feels like work. [For example,] I’m working by reading my emails, but not actually creating.

Panio: I think almost everyone agrees emails are a great fake out. You do your email, and you get to inbox zero, and you feel like a champion. But you achieved nothing.

Bernadette: At the end of the day you wonder why you don’t have that sense of fulfillment. You haven’t even baked a pie.

Panio: At least if you bake a pie, you’ve got something to show for it.

Bernadette: Personally, my anchor is my blog, so I have to post three times a week. When you have to show up, and when you’ve made a bargain with yourself to show up, then inspiration appears.

Panio: You hold yourself to that.

Bernadette: It’s being accountable, and understanding that it’s important to do that, to nurture yourself.

Panio: A lot of time, people write books because they’ve had some experience with the topic. Were you always especially intuitive, or were you not intuitive and so this was an attempt to get in touch with your intuitive side?

Bernadette: I feel like I make a lot of decisions intuitively. My family and I moved from the UK to Australia about 12 years ago, and I’d never been to Australia.

Panio: You just went for it?

“We have to take leaps into the unknown if we’re going to create world-changing ideas.”

Bernadette: Just went for it, and did not know what was on the other side. That’s what hunch is about. We’ve tricked ourselves into thinking that because we’ve got data, we can mitigate risk and uncertainty, and that we don’t have to take the leap. We have to take leaps into the unknown if we’re going to create world-changing ideas. Where was the data for Facebook, for Google, for Airbnb? So many great, experienced VCs passed on [those], and lost a lot of money as a result.

Panio: People think, “Oh, it’s an algorithm, so it’s safe, and it’s objective,” when in fact, algorithms are created by people who are fallible. So we’re going on this false premise that an algorithm is untouchable.

Bernadette: Well, the recent election results here and Brexit in the UK point to that. The data said one thing, and actually the [real] story is right under our noses, and we’re ignoring it.

Just before the election, I was here in New York, and everybody from Nate Silver to all the forecasters were saying that Hillary was going to win by a landslide. My husband and I met this guy selling hats outside Rockefeller Center, and they were emblazoned with the candidates names. He said to us, “Trump is going to win this election, because I cannot keep these hats stocked.” He was closer to the ground, he was speaking to people. He knew the data in the stories.

Panio: You talk about how people want to make an objective decision. They want to exorcise any emotional element in order to be purely rational, but you researched it, and said that does not work. You can’t make a decision without some emotional component.

Bernadette: That’s part of the human condition, isn’t it? That’s why we spend more on lotto tickets than vegetables. It’s why, despite wearing fitness trackers, we’ve still got a rising obesity problem. We know what we need to do, but we’re not rational, and emotion always comes into our decisions. We should acknowledge it, and celebrate it. That’s what makes us human.